This is an excellent video which explains why healthcare costs have gone up so much (starting at 12:00). I agree that the blame cannot be placed squarely on regulation.

There are many factors at play:

Record high corporate profits and personal income means more money to spend on healthcare. US per-capita personal income has surged over the past decade in spite of Covid, and relative to GDP growth and inflation: 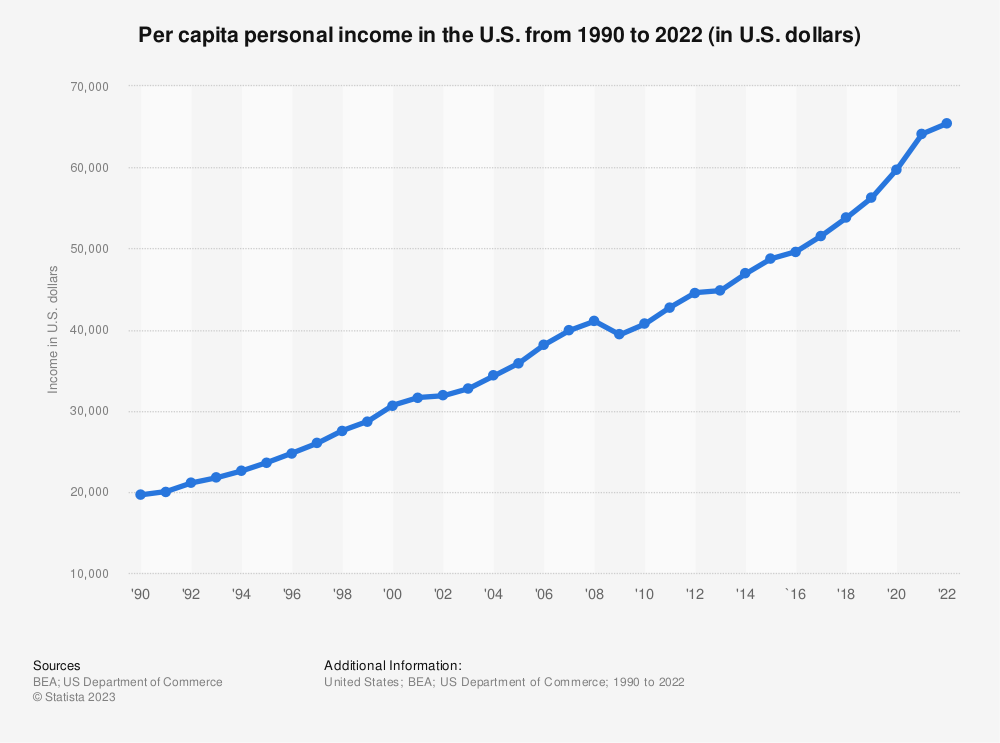 This also closely tracks healthcare spending, which has also slightly exceeded inflation. It’s reasonable to assume that as Americans become wealthier and have more disposable income, that consequently they will spend more on healthcare, too, like any other consumer good. I am not sure why healthcare would be excluded from this trend.

Healthcare is labor-intensive, such as doctors and nurses. Labor has resisted the trend of deflation seen elsewhere (the so-called Baumol effect, as discussed in the video). Computers and TVs are cheap, but cable, internet, and phones plans have gotten more expensive relative to the hardware. This is why some carrier plans give away the phone or offer generous rebates. Also, doctors in the US make considerably more more than elsewhere. This in and of itself is a separate problem. Part of the reason doctors earn so much is because the bar is set very high, such as lots of degrees and training. It’s hard to justify going $250,000 into debt and spending an extra decade in school to only make a middle-class salary.

One must take into account individual preferences and quality of care. For countries which purportedly have cheaper healthcare, such data ignores private care coexisting with public plans and higher taxes (such as opting for private care, but still having to pay higher taxes for universal care, which seems unfair). After factoring in higher taxes, Brits pay more for ‘free’ healthcare than Americans who have employed-sponsored healthcare, and the quality of care is possibly worse and fewer items covered (dental, certain drugs, elective procedures, etc.).

Some may be surprised to learn that dental care is not covered by certain ‘universal’ healthcare systems, such as in Canada, hence the ‘luxury bones’ meme. The assumption is someone whose teeth are badly infected enough will go to the hospital to have them pulled, instead of seeking preventive dental care. Which sounds totally wrong-headed.

America is full of sick people. Preventative care and modernity has not put a dent in this problem (and also, preventative care is still healthcare). The emergency room is full of people all the time, of all ages. (If it were only old people who are getting sick–hardly.) It does not matter how high the resolution on the 50-th generation iPhone camera is, people still go to the emergency room for stomach aches, injuries, constipation, infections, headaches, etc.–conditions that have afflicted humanity forever, and will continue to do so.

Here we can see that people who are over 65 visit the emergency room at only a slightly higher rate compared to other age brackets: 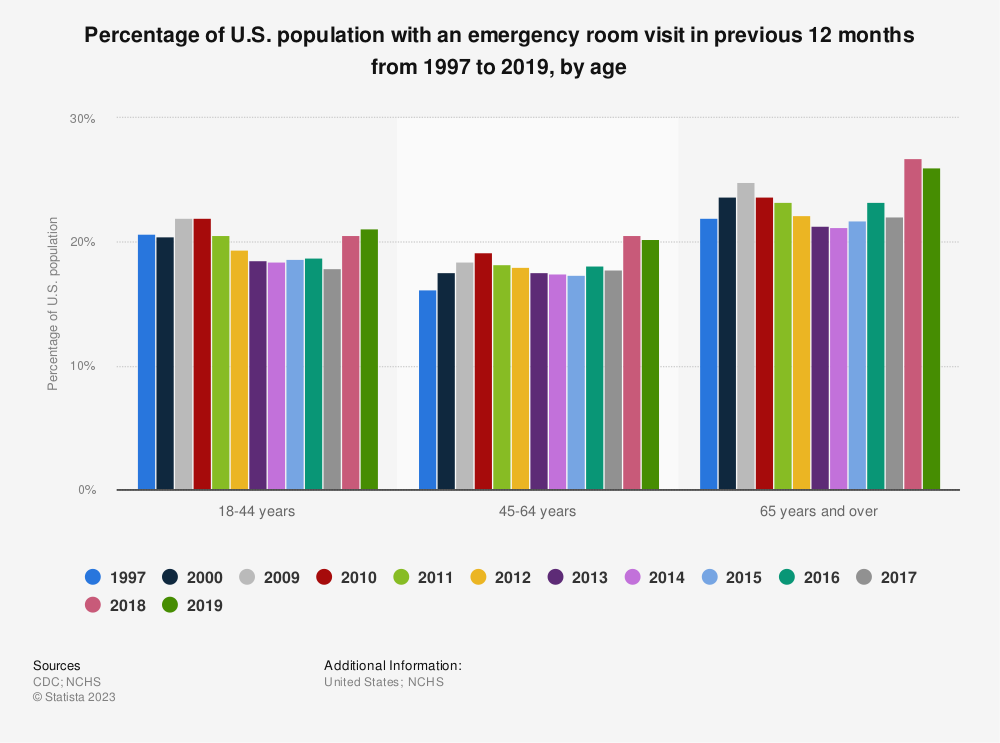 Kids get ear infections and break bones. It’s not that uncommon for 20-30-year-olds to have autoimmune disorders such as lupus or Crohn’s disease. Or middle-aged people who are still working, but have diabetes and or hypertension due to obesity and bad diets. Same for mental health problems. Someone has to pay for all of this.

Also, medicine is effective compared to alternatives. Americans don’t want diet and exercise. They want quick fixes (pricey but effective drugs like Semaglutide for weight loss). Drug companies encourage Americans to tell their doctors about their drugs, knowing it will be covered by insurance. This is why there are so many ads for drugs. Expectations for healthcare are also high. Americans want the latest treatments and fast, responsive care and minimal delay between tests and seeing a specialist. I don’t think most Americans would tolerate a slower NHS or Canadian rationed or needs-based approach to healthcare. This again costs money.

No one is paying for it. No one is paying for that $10 Band-Aid or that $20 cotton ball. Or that $20,000/month experimental cocktail that adds 3 extra months of life for stage 4 brain cancer. Rather the insurer pays for it. The insurer negotiates a much lower price than the initial inflated sticker price. This is why you see ads on YouTube for drugs, similar to on TV, for chronic conditions. Drug companies make a lot of recurring revenue from these incurable but expensive-to-treat conditions. Unlike other consumer goods, price is not a factor. People typically do not shop for healthcare like they shop for cars, vacations, or TVs. So drug companies can name their price, knowing that the insurer, not the consumer, is paying for it.

Drugs are also very expensive and time-consuming to develop. It can take a decade for a new drug to hit the market, after passing multiple FDA gantlets. So drug companies need to charge a lot to recoup such costs and turn a profit. Although pharma stocks have high profit margins relative to other sectors, I think this is not so much indicative of gouging, but to cover the variability of research and devolvement and the uncertainty of commercial success of a drug. Drug development tends to be all-or-nothing: either a drug is successful or it’s a total, costly failure (either at the development stage or on the market). A common augment is to blame the FDA, but I don’t think this is correct. The FDA plays some role , but the main problem is that drug development is expensive owing to the high failure rate overall. That $20,000 FDA-approved cancer cocktail that merely adds months to life, is the best that medical technology can do. So you can imagine how ineffective the treatments which fail to meet even this low bar, are.

Finally, there is the corporate-profits-to-insurance pipeline. Healthcare stocks, especially health insurers, benefit from three long-standing trends: record corporate profits, which funds employer-sponsored healthcare. Second, Americans getting older and unhealthier, as well as more elective/unnecessary procedures. And finally, the ability of drug companies and hospitals to set prices, knowing that insurers will pay. And then insurers pass these costs to employers. I don’t see any of these trends changing.

Overall, think insurance is to blame to some extent for distorting prices and preventing market forces that are present in other consumer goods from attenuating prices, much like how excessive financial aid has distorted college tuition prices.