An oft-repeated factoid or ‘info nugget’ is that ancient and medieval people lived long lives, comparable even to today, after excluding child/infant mortality. Infant mortality skews the data so much that average life expectancy was otherwise similar to today.

Not quite so. Rather than the assurance of a long life conditional on surviving infancy or childhood, at best it’s a few extra decades, with survival beyond the age of 70, which could be considered elderly, being very uncommon. Yes, there is a bump in average life expectancy after the age of 10, but it’s not that much, maybe only 3-4 decades, even as recently as the 1800s.

From Wikipedia, Ancient Romans had a life expectancy of 35-40 years even after factoring out infant mortality, which is still pretty bad, or comparable to the life expectancy of someone born with a terminal condition like cystic fibrosis today:

Factoring out childhood mortality bumps it up to 45-50, which still 5 years fewer than even the most impoverished of countries today.

Even in 18th century England, excluding the first year of life, the average age was only 46-48.

So still pretty bad. By comparison, 97% or more of people born in the 21st century in the US or the UK can expect to live at least 50 years.

There is this sort of romanticism that people lived heathy lives in antiquity and pre-history, and modernity made things worse, when in reality, people tended to die young of things such as infections, injury, or even cancer, which are nowadays are treatable or curable. Despite healthier diets, tooth impactions and infections still existed hundreds or thousands of years ago; same for urinary tract infections.

If you go the emergency room, which I recommend you don’t, you’ll observe that there is a wide range of people who need help, not just the elderly or infants. People of all ages get seriously sick or injured. This is also confirmed by insurance premiums. From moneygeek.com, “The average premium for an 18-year-old was $324 per month compared to $642 for a 50-year-old and $970 for a 60-year-old.” Here is the table:

If young people are supposedly immune, why are premiums still high? Yeah, a 30 year-old may pay only 35% as much as someone who is over 60, but $3600+/year in premiums is nothing to scoff at…this is comparable to interest on student loan debt, and for a supposedly low risk age group.

Young and middle-aged people are not supposed to get sick, yet evidently enough of them do that they still have to pay a lot for insurance. Here’s one such blogger who describes how his wife, aged 40, died of colon cancer despite having no risk factors. Stories like this and others are not unheard of…a Google search shows tons of young and middle-aged people coming down with serious diseases like cancer, various inflammatory conditions like Crohn’s or Lupus, hypertension, depression or other mental health problems, or diabetes, and it’s not just obese people or smokers. That’s why insurance companies charge what they do…it’s all based on statistics. Sure, it’s rare to have cardiovascular disease or cancer in your 30s, but not that rare. This is even in spite of antibiotics, which contributed a lot to the bump in life expectancy in the 20th century, because as powerful as antibiotics are, many conditions are not amenable to them require a multi-treatment approach.

I had a 1997 edition of the Merck Manual, which is a 1509-page medical reference book of every possible malady that can befall a person. It’s thicker than even the paperback of Atlas Shrugged: 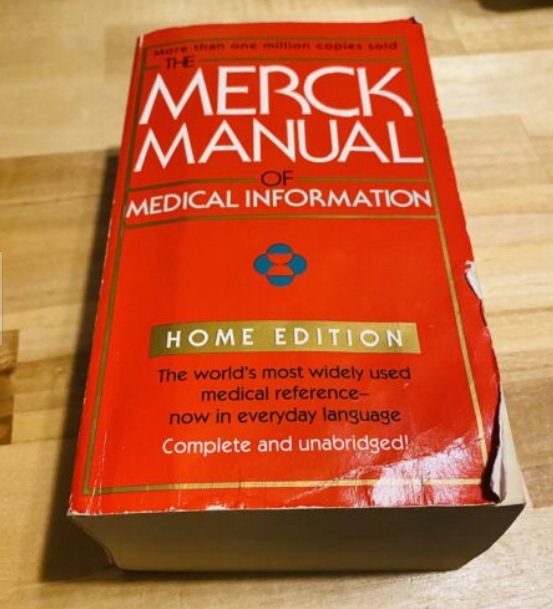 Mine looked like this but the spine broke in the middle.

It’s something of a miracle people live as long as they do given all that can go wrong, and a large part of that is due to modern medicine.

This romantism also is part of a broader narrative that most medical treatment or medicine is somehow extraneous or wasteful. I agree that healthcare costs in the US are possibly too high due to administrative waste and other factors, but this is not the same as the treatments themselves being unnecessary. This sort of logic doesn’t make much sense to me. Who enjoys going to the doctor? Who likes taking prescription drugs? “I love weight gain and neuropathy,” said no one ever. It’s just that these side effects are still preferable to the alternative without such drugs. This is based on double-blind randomized trials, in which after taking into account factors such as quality of life and the placebo effect, such drugs still provide a net benefit.

That’s not to absolve modernity of all blame. Worse diets and sitting too long means more obesity, more hypertension, etc. But why some people get sick is still either not understood or genetic, such as some groups being more suspectable to heart disease or cancer than others even after controlling for environment. Indians and South Asians, for example, are vulnerable to coronary artery disease; blacks are vulnerable to hypertension and obesity; East Asians are vulnerable to stomach cancer.

Also, one must take into account that conditions which we nowadays have technical names for, like ‘adenocarcinoma’, ‘pulmonary embolism’, ‘sepsis’, or ‘myocardial infarction’, were in ancient times ascribed to demons or called something else, like ‘bad humors’ or ‘delirium’. Regarding the apparent absence of heart disease in antiquity, people didn’t live long enough to develop heart disease. Same for the apparent absence of cancer. Obesity is a problem that tends to get worse in middle age, but people didn’t live long enough for obesity to become a problem, and food scarcity, dysentery, and manual labor seems worse compared to better nutrition at the cost of some obesity.

That’s not to say all medicine is good. Drugs which prolong terminal cancer survival by mere months at a cost of $10,000/month, seems like a waste of money especially if it’s paid for by Medicare. Treating or masking symptoms, than actually finding a way to solve the underlying problem entirely, seems wasteful yet unavoidable given how intractable and complicated some of these problems are. What is needed is something like the Covid vaccine–a merger of the government and the private sector– but to treat obesity, and to be administered at no cost to the general population. I think this would go a long way to raising life expectancy even more and reducing healthcare costs long-term even if it’s expensive in the short term.

Overall, Americans take a lot of prescription drugs, not necessarily as a crutch or laziness, but because they are effective and people of all ages will have at least some medical problems. People in the past suffered and died from chronic and acute conditions like fractured bones, dysentery, impacted teeth, infections, etc., unlike today in which treatments exist.