My IQ piece: exams do not measure knowledge and abilities v. well; exams are extremely good at measuring the ability to take exams.

But avoid the denying the antecedent fallacy: being good at exams doesn't mean you aren't good at being Fat Tony.

I’m guessing he chose 35 because that is when he became rich writing mediocre books, trading (he claims to have gotten rich with trading even though no records or second-hand anecdotal evidence exists of any actual trading prowess on his part), or kinda being a thin-skinned blowhard online. This may seem mean, but given that a Twitter search shows hundreds instances of him calling people ‘morons‘, ‘imbeciles‘, or ‘idiots‘ merely for disagreeing with him, and penchant for blocking at the slightest provocation or even none at all, this description is not entirely inaccurate.

The boat in the tweet likely isn’t even privately owned. The average cost of a cruise is $200/day, so this is hardly a signifier of exceptional success. It’s like congrats, you took a photo on a boat…no one has ever done that before.

He says “exams are extremely good at measuring the ability to take exams” Not true. Success at IQ tests and proxies for IQ (like the SATs) are correlated and predictive of success at life in general, particularly when controlling for individual preferences. Or at anything competitive and g-loaded.

As evidence of the predictive value of IQ beyond just exams, I’m sure many have seen the illustration below, showing how top .25% scorers on the SATs at the age of 13 have a much higher likelihood of success professionally compared to’only’ top 1% scorers: 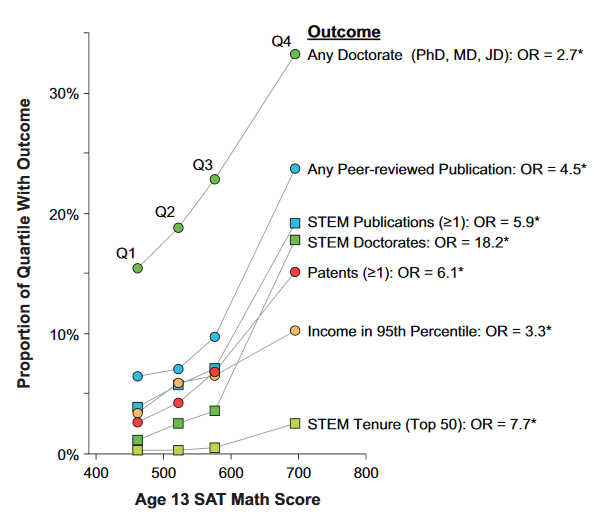 From Two Paths to the Future:

Simply going from an IQ of ~135 (99th percentile) to ~142+ (99.75th percentile) has enormous effects in terms of income, innovation, and science. Extrapolate that to 168. Times a million. However, the only variable here that’s directly quantifiable in dollar terms is >95th percentile income and what we’re really interested in are the externalities. Undoubtedly the innovation that goes into those patents, and the discoveries that go into those publications create societal value. But putting that value into numbers is difficult. If I had to make a wild guess, I’d multiply our naïve $8.4 million estimate by 5, for a present value of $42 million per JvN.

So getting rich at 35 presumably means that one’s individual preferences are aligned for the accumulation of wealth at an early age, so having a high IQ would likely be an asset. For example, compare the salaries of coders or lawyers to Amazon or Door Dash delivery drivers or Uber drivers. No one works a crappy delivery job or service job unless they need to make money, yet we clearly see that when holding individual preferences constant that huge variance of income exists, probably in part due to IQ. Yes, ‘work ethic’ is also important, but that too may be innate, and still, IQ matters. Or in other words, IQ is a necessary but possibly still insufficient condition.

When I said to avoid Bitcoin 2021, which is overhyped and subsequently lost 75% of its value, I’m sure IQ played some role in that decision. But to Taleb’s point, many smart people like Peter Thiel were/are hyping Bitcoin. So having a high IQ does not mean that one is necessarily protected from doing or believing foolish or reckless things. Bitcoin has done worse in 2022 than even housing/banking stocks in 2008. As the collapse of FTX has shown, IQ is not a signifier of moral worth either. But that doesn’t mean we can or should dispense with it altogether.

That’s not to say average-IQ people whose individual preferences are aligned for wealth creation cannot make money, but they tend to benefit more from lottery-like systems of wealth (such as podcasts, the entertainment industry, or YouTube) compared to more meritocratic ones (high-paying white collar jobs, academia, success at Substack). This means that the median is much lower (lots of losers), and the mean skewed by some lucky big winners (e.g. Pew Die Pie, Mr. Beast).

We see this with all aspects of life (or anything with rank-ordered ability for g-loaded tasks). Innate factors like talent and IQ matter, because life is inherently competitive, and there is scant evidence to suggest life is getting easier or less competitive. (Harvard’s acceptance rate, for example, has fallen in half over the past few decades despite its applicants being more qualified than ever as measured by test scores, GPAs, and extracurriculars.) If you want to be good at something, you are likely going to be competing against other people who also want to be good at that very thing.

I like to put it another way: talent is the *thing* that persists when you control for everything else. It’s hard to explicate or replicate talent, but we seem to know it when we see or experience it. Practice is supposed to try to replicate talent, but it’s never quite good enough. I’m sure we all know people who have practiced a lot at something, and although they may be good or even competent, they never quite reach the artistic or creative heights as someone who is talented. This is why Gladwell’s ‘10,000 hours rule’, popularized in his 2008 best-seller Outliers got so much pushback, because it’s obvious that 10,000 hours, or any threshold, is insufficient for assuring mastery or critical success. Plenty of people practice a lot and never get that good, and others seem innately or instinctually good, without needing as much practice.

Yes, kids who have wealthy parents are also at a major advantage in life, and that too is as uncommon as high IQ, but then why can we accept that wealth inequality is real, but not cognitive inequality? Maybe some people are just ‘better’ than others (not better people per say, but more competent, skilled, or can learn faster), and that’s fine. Why is that any worse than admitting that some people are more athletically or musically inclined than others.

Society is afflicted by a sort of cognitive dissonance in which we have to pretend that this thing, being IQ, doesn’t exist, yet our actions suggest otherwise. Parents seem to care a lot about IQ even if the media and intelligentsia insists it doesn’t matter or isn’t real. When NYC mayor Eric Adams merely said that some jobs are more skilled than others, the media got mad, because what he said was true and important (no one would have cared if he said UFOs are real, because who cares). No one gets mad if you tell people things that are unimportant and false, but they do get mad if it’s discomforting and true.

Taleb has had every opportunity to debate experts on matters pertaining to IQ, such as Stuart Ritchie, Charles Murray, Jordan Peterson, or Richard Haier and prove them wrong, yet has refused. So the best he can do is resort to name calling or one-off anecdotes (like the tweet above). In the end, the truth is what matters. If what Taleb said was true, great, but the evidence suggests otherwise.