Two weeks ago (and earlier) I said that as the stock market recovers, Bitcoin & Arkk will lag Tesla and 3x tech ETFs TECL and TQQQ considerably.

So far it’s playing out exactly as I said it would. Bitcoin crashed 8% on Friday despite the Nasdaq only being down 2%. Arkk and Bitcoin are lagging big time as the Nasdaq and S&P 500 recover their 2022 losses. Its not even close (over the past 3 months): 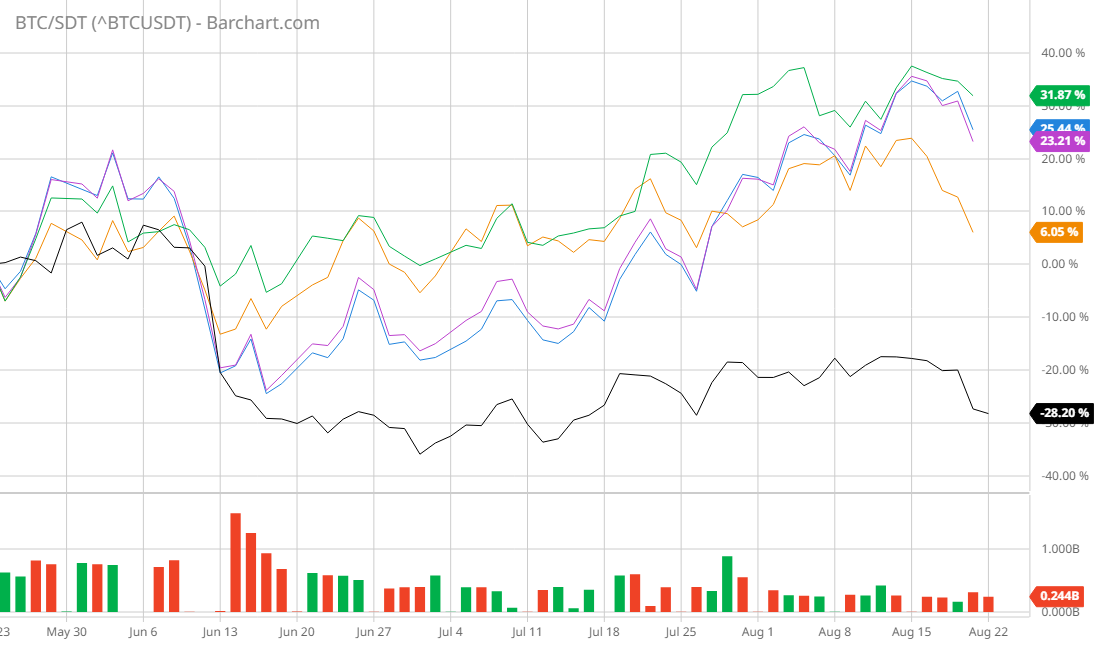 The green, purple, and blue lines are Tesla, TQQQ, and TECL respectively. The orange and black lines are Arkk and Bitcoin respectively. You can see how stark the performance difference is, especially between Bitcoin and the 3x funds (TECL + TQQQ), as predicted here.

So this multiple correct predictions: Nasdaq recovers and Bitcoin and Arkk lag 3x ETfs and Tesla. Or another way, I got 5/5 correct The odds of getting all of these right is somewhere between 1/16-1/32 depending on the correlations. 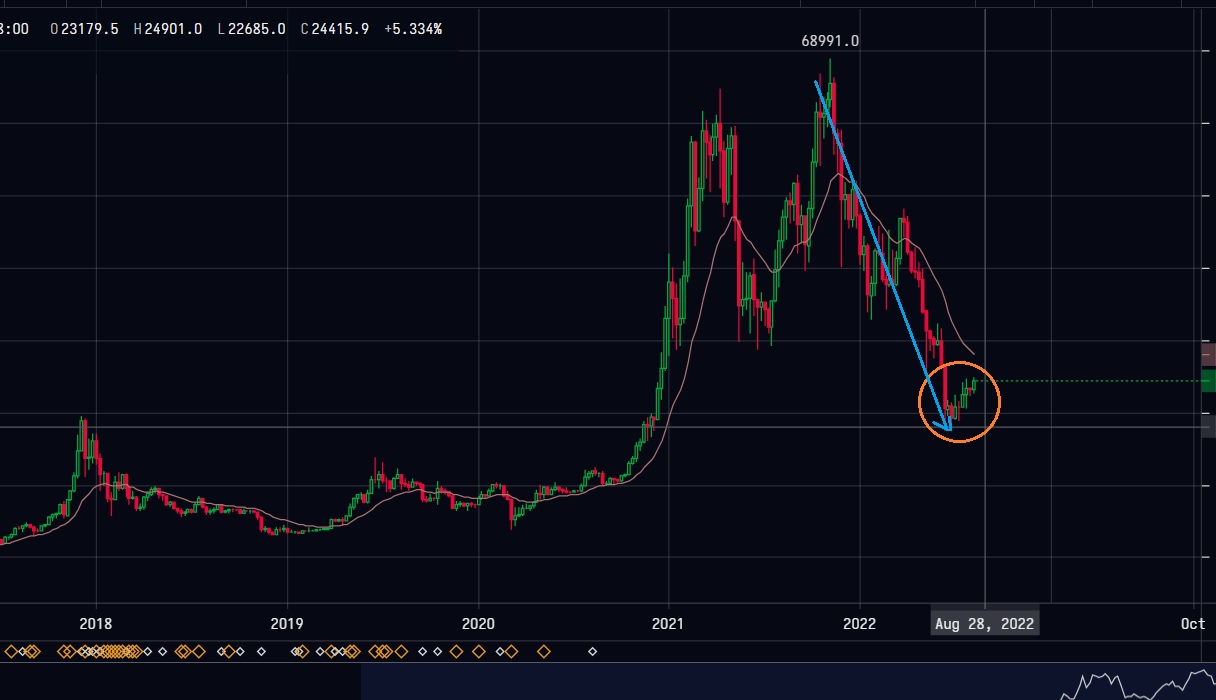 The above screenshot was taken when it was trading at $24,400; it’s now at $23,800 $21,000 despite the stock market going up. In the post about Super-forecasting I explain in more detail my reasoning for why Bitcoin would fall, which it has (I wrote the post on 8/2/2022 and Bitcoin has since fallen $2,000 despite the S&P 500 rising). The idea is that short and medium-term price movements can be predicted [0] for commodity-like assets by analyzing various geometric properties (like smoothness, compression, and convexity/concavity) of the chart, which can be made mathematically precise. Markets are mostly random in the short term, but they must still obey certain constraints or ‘laws’, which make them possibly predictable in certain cases in terms of certain conditions holding. [1]

Unlike Renaissance (and the lesser-known but equally secretive TGS Management), my approach is not a purely quantitative approach. Like TGS and Renaissance, it’s mostly automated but vastly fewer trades (as in maybe a few trades/year, not thousands/day).

The post The Man From The Future Scott reviews a biography about John von Neumann, who is widely regarded as a genius visionary, hence the title of the book. Just as he could see the future, so can I (although in the context of the book and the title, it was more like he ‘created’ the future, such as computers and AI, than predicted it). It’s like on the blog I write what is going to happen, and then 85-90% of the time it happens, whether it’s finance, politics, geo-pol, econ, etc.

Although Objectivism is criticized as being derivative, the thrust of the philosophy, like object-mind independence, is correct. Rationality and reason are the tools with with which to understand the world and be a more effective person, and this applies to investing and other aspects of life. It’s like “How are you right all the time?” Once you understand how things works, you cannot help but to be right or ‘see the future’. Eliezer Yudkowsky calls rationality ‘systematized winning‘…I think there is some truth to that.

Some people have/will take umbrage at this. What does it mean to win? Who is a rational person? If winning is defined as ‘quantifiable measures of individual success’ (like income) and rationality is isomorphic to IQ or some other measure of reasoning ability, the correlation tends to hold. Or if everyone has access the same publicly available info, such as economic data, more rational people will make better inferences from it. Or analogous to having a panoramic view. Or filtering out noise: People are inundated with information, so how does one make sense of it, or know what to discard. Even if rationality is hard to define, it would seem as if some are endowed with more of it than others. You can tell that some people are just better at understanding things or whose worldview is more accurate.

Right now a lot of smart people are worried about AI risk, which is something that does not concern me too much. For a few reasons: first, that such predictions of doom or crisis , whether it’s overpopulation, banking crisis, dollar collapse, pollution, global warming, etc. are never as bad as expected, and the people who make such forecasts tend to have horrible track records. Every year we’re told how the world will be doomed in the next 10 years due to climate change. Financial crisis are rare despite all the media attention they get (there were just two major banking crisis in the US in the past 100 years: 1929 and 2008). Meanwhile the bad things that do happen, no one sees coming (how many predicted Covid or 911?), whereas things like climate change or AI risk keep dominating headlines. Sure, some people warned about pandemic risk before Covid, but they were and still are vastly outnumbered by people warning about climate risk. Of course, one can invoke the preparedness paradox, but this seems like an unfair shifting of the burden of proof. But I think the biggest AI risk is not the AI becoming sentient or uncontrollable, but rather some error that causes it to malfunction in some unforeseen way with possibly destructive consequences if there aren’t sufficient override mechanisms. What is the likelihood of this in probability terms? Who knows.

Bitcoin is now only correlated to stocks on the downside. 30.6K is the ceiling while we crab from now until eternity. #bitcoin $spx $nasdaq $btc

This was by “@JustinSarnowsk5” who has a grand total of 114 followers. This was posted in May 2022 when Bitcoin was above $30,000. Note how the author correctly observed, as I had, that Bitcoin is correlated with the stock market to the downside, meaning it captures the downside (usually by a multiple of 2-5x) but much less or none of the upside. Sure enough he was right: Bitcoin would crash to $18k, and Bitcoin is nowhere near reclaiming $30,000 even as the Nasdaq and S&P 500 keep climbing. This agrees with my earlier posts about how competence and accuracy is inversely correlated with followers. It’s these no-name people who are the most accurate, not people with huge followings. There is this huge reservoir of hidden talent, yet grossly incompetent, overpaid people keep being elevated and promoted; I call this the expertise misallocation problem.

[0] By predicting, I don’t mean discrete events, like coin flips, but rather correlations. In the short-run, like hours or days, Bitcoin and the stock market are highly correlated, but Bitcoin has a drag factor, meaning that over a period of weeks or months, as the market oscillates, this drag will cause Bitcoin to massively underperform, which it has. The way the trade would thus be structured is to short Bitcoin and go long the Nasdaq, with put options for the former.

[1] This does NOT work for index funds like the S&P 500, because index funds are not closed systems, but rather are influenced by outside factors like economic fundamentals and inflows from pensions and passive investors.