There are many well-worn arguments trotted out by the media and pundits against genetic determinism, or that IQ or talent does not matter compared to ‘grit’. They tend to have gaping holes.

“The correlation between IQ and job performance is low, around .20-.30, thus IQ is not that important.” Taleb cites this common statistic in his viral essay IQ is largely a pseudoscientific swindle. It’s easily debunked. First, ascertaining job performance is inherently subjective and depends on surveys of employers, unlike SES status, SAT scores, or educational attainment, which are objective. Second, the low correlation is conditional on being hired. Good-paying companies tend to invest a lot of time and resources filtering out potentially incompetent prospects. Someone with an IQ of 150 may not do their job much better than someone with an IQ of 130, but you may still need credentials commensurate with an IQ of 120 to be considered for the job in the first place.

“No one is born knowing how to play chess, play an instrument, do math, etc. Hence, talent is not real. Anyone can be good at anything.” Except that people are born with differing quantities of intelligence, which correlates with the ability to succeed at specific cognitively-demanding skills. Yes, no one is born knowing how to read, but smarter people tend to read at an earlier age and have better comprehension compared to less intelligent people.

“The correlation between wealth/income and IQ is low.” In the above essay, Taleb cites a study that purports a low correlation between IQ and income. However he ignores the role of individual preferences and competition. This is discussed in more detail here: Nassim Taleb is Possibly Wrong about Wealth and IQ The correlation is low because it’s not like all high-IQ people aspire to high-paying jobs; some want to be writers, actors, poets, teachers, etc. Thus, one must take into account individual preferences, so among people who aspire to make a lot of money, there is likely a lot of competition in the hiring process, and hence having a high IQ helps, specifically, to get past the screening process. (see point #1)

“Someone who practices a lot will be better at something–be it weightlifting, running, coding, chess, math, etc. than someone who does not practice, hence having a high IQ or talent is not that important compared to effort.” Being good at something cognitively demanding like chess or writing entails having to compete against other people who want to be good at those things, which means that talent or IQ is a major tailwind. If you want to be a competitive runner or weightlifter, you will have to compete against other people who also want to be good at running or weightlifting, not just random people picked off the street. So, yes, practice will make you better at something, but when it comes to rank-ordered success in which many people are aspiring to that same goal, that’s where talent comes into play. Because not everyone will get the same mileage for their practice or start on equal footing. In Pumping Iron why did Arnold win many Mr. Olympias but his buddies didn’t even though they were all practicing together, took the same drugs, and aspired to the same goal? Because Arnold’s genetics were better.

Again, no one is claiming that grit, perseverance, or practice does not help, but absolute ability and relative ability are likely heavily determined by genes, in the end.

“IQ is not that valid or predictive above some threshold, like 120.” This is a common argument by Taleb and Gladwell, and it’s wrong. The correlation between IQ and ability for a wide range of cognitively-demanding tasks and outcomes, be it publishing research, writing success, being awarded a PhD in a STEM field, math competition success seems to have no point of diminishing returns. According to the Study of Mathematically Precocious Youth (SMPY) and the Duke University Talent Identification Program (TIP), “…researchers found that not only did the top .01 percent fare well against the general population, but also when compared to the top 1 percent of adolescent test-takers.”

“IQ does not predict academic achievement.” If this were true we would expect low-scoring individuals to outperform academically relative to their scores, but this does not appear to be the case.

The correlation between academic achievement and IQ is fairly strong, at .7, and holds for all IQ ranges:

(This also counters the argument that IQ is not predictive of above-average ability as claimed by Taleb.)

“Coaching and other environmental factors can make a huge difference.” Studies show SAT coaching adds only dozens of points at most, not hundreds of points as commonly purported by unscrupulous coaching services. From Slate Does SAT Prep Actually Work? “…coaching has a positive but small effect: Perhaps 10 or 20 points in total on the SAT, mostly on the math section, according to careful work by Derek Briggs of the University of Colorado Boulder and Ben Domingue of Stanford University.”

Also, there is still a huge amount of variance of individual ability after controlling for environmental factors such as coaching or studying. Thousands of prospective upper-middle-class students cram for the LSATs, yet some individuals get many more correct answers than others. Same for high-stakes math competitions, in which thousands of smart high schoolers are coached, yet what separates the top scorers from everyone else is raw talent. Long before anyone can put in their ‘10,000 hours’, differences in individual ability manifest as early as kindergarten, and as noted by Freddie deBoer, persist to adulthood. Any elementary school teacher can attest that there are ‘slow kids’ and ‘fast kids’, and that this cannot just be explained-away by the slow kids being abused or malnourished.

Numerous twin and adoption studies show that environmental factors are secondary to hereditary factors, that is, the IQs of adopted children track their biological parents, and that identical twins raised in different environments have similar IQs and life trajectories and other attributes: 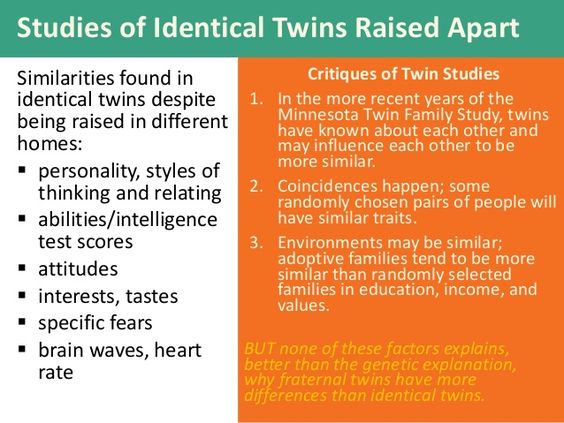 Here one can see that the correlation of IQ scores is highest between identical twins (monozygotic):

Source: The Genetics of Intelligence

“IQ tests discriminate against minorities, are culturally biased.” It’s commonly argued that IQ tests are culturally biased against blacks, yet blacks perform worse or the same on digit span (forward and backwards), assembly, and pattern recognition (such as progressive matrices), which require no cultural context, as the more ‘biased’ portions such has verbal. Also, alleged cultural biases does not explain minorities such as Asians and Jews outperforming ‘native’ whites.

Although almost any skill can be improved with practice, being competitive at a skill is more a product of innate factors like talent than just grit.