Saw this The Lumpenbourgeoisie: The price we pay for elite overproduction. His argument is that elite overproduction means that college grads with useless/unmarketable degrees are increasingly finding themselves unemployed, hence possibly precipitating the long-awaited collapse of the student loan/higher-ed bubble. 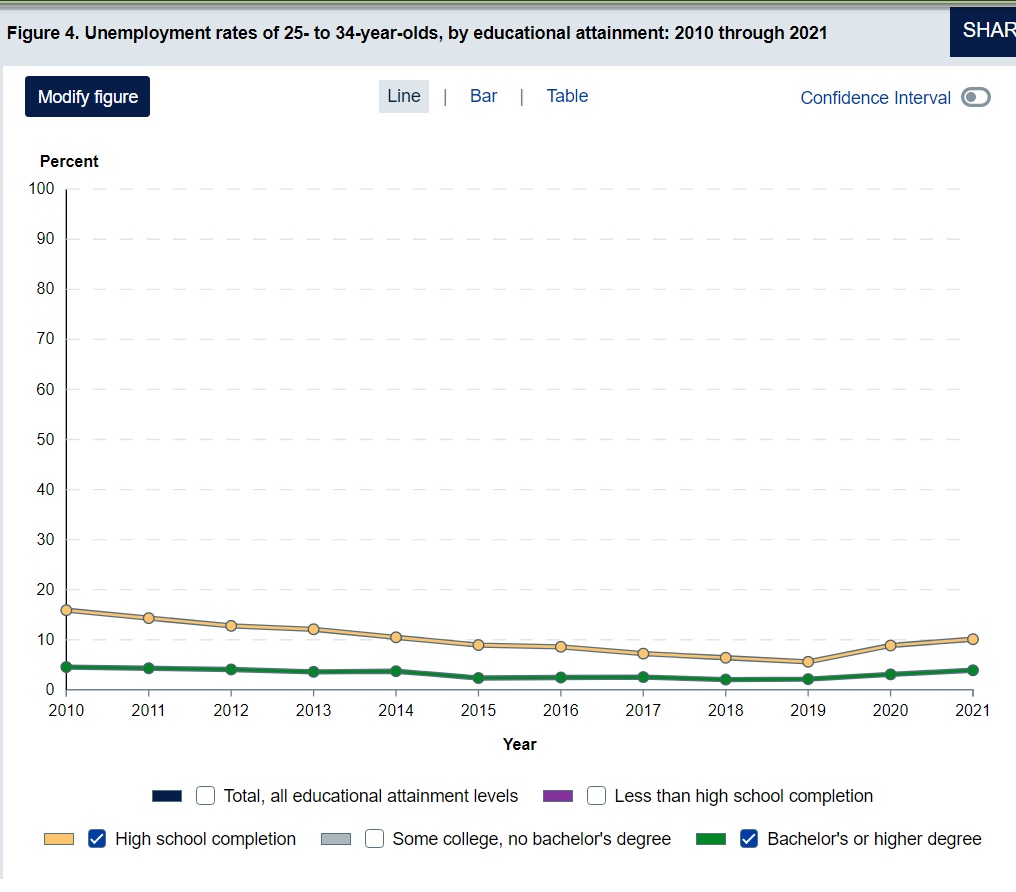 Also, during the pandemic many low-income workers were among the first to be fired and last to be rehired during the recovery, whereas college grads were more likely to keep their jobs and work from home. ‘Essential’ workers also made less money and were exposed to the virus.

So over the last couple of decades we’ve been minting more college graduates than ever, but their career prospects are bleaker than they used to be. It’s a quandary that has forced these new job entrants to adapt in ways that have transformed the industries they’ve infiltrated.

Again not true. The wage gap between college and high school grads hit a record high:

The difference marks a pay gap of $22,000 — the highest on record with the New York Fed, which tracks earnings going back to 1990.

This holds for all degrees, and it widens over time, again suggesting only a small overlap of high school grads beating college grads:

This is exactly what I predicted in 2020 during the pandemic would happen. At the time pundits were predicting a ‘new normal’ in which college grads would either make less money relative to high school grads, and or that college would become less important. I predicted the opposite and was right as usual.

Quite understandably, these young, educated professionals aspire to the upper-middle class lifestyles that they believed their college degrees promised to provide for them. But as less than a third of college degrees awarded each year are in STEM fields, they tend to lack clearly marketable skill sets. Their Comparative Literature and Political Science classes haven’t taught them how to build or design new products or how to plan and implement new business strategies. What they have in abundance, however, is cultural capital, and more specifically, its college-inculcated subvariant, moral capital.

But they still earn more. The data shows grads even from middling schools and with ‘useless’ degrees still earn a lot more money and have lower unemployment compared to high school graduates, even after accounting for student loan debt and inflation. There is no getting around this, as much as people want to rehash tired narratives about unemployable humanities majors. This is not 2010, after the recession when there was 9-10% unemployment and a glut of unemployed graduates. The unemployment rate is at just 3-4%. Just because not all college grads are making 6-figures does not change the fact that the college wage premium is real and keeps widening. Yes, $50-90k with a degree is far from elite status but sure as hell beats $20-45k/year without a degree or not being able to find work.

From amacad.org What Becomes of Humanities Majors after College? A New Indicators Report Offers Clues:

Median annual earnings for humanities graduates who worked full-time were somewhat lower than the median for all college graduates in 2018 (for those without advanced degrees, $58,000 compared to $63,000), but significantly higher than for workers without a college education ($38,000)

Some sources put it at $50k, which is still 30% more than high school grads. But even the worst possible degree,’early childhood development’, still has $100-200k more in lifetime earnings compared to high school grads. Given that the average student loan debt per graduate is $20-30k (not the $200k+ figures enormously cited by the media, which are outliers), this is still a good ROI.

Even if many college grads find themselves in lower-paying jobs that do not require a degree, they are still at an advantage in the hiring process: all else being equal, an applicant with a degree is usually preferrable to one without. So, yes, you don’t need a degree to do clerical work or be an assistant manager, but your unemployment rate is still lower.

“Diversity, Equity and Inclusion” consulting jobs have thus metastasized into a global, multi-billion dollar industry. That industry has become not only a life raft for otherwise employment-challenged college graduates, but a job-producing juggernaut that can sustain the credentialed class indefinitely, whatever happens to the real economy.

The college wage premium encompasses far more than useless DEI jobs. It’s in all aspects of employment. It’s not like you need a college degree to parrot BLM or CRT mantras, as we saw during the 2020 George Floyd BLM/antifa riots, in which most of the rioters didn’t have degrees, as would be expected given that, still, only 38% of the general US adult population has a 4-year degree. People keep spreading this narrative that schooling is about indoctrination and instilling conformity, although there is some truth to this, if the goal is indoctrination, the modern education system is probably the least efficient way of going about it.

If good-paying employers just wanted obedience, they wouldn’t have to pay such high wages for college grads (they would just hire woke high school grads, which there are plenty). So it’s evident that a college degree confers more than just SJW/woke conformity/obedience. Overall, any optimism that that college wage premium is shrinking or that college grads are losing their edge, is way premature.