The consensus 1-2 years ago is that Tesla would crash, was a fad, a massive bubble, dependent on subsidies, etc. I guess it was no so irrational, after all, that Tesla stock did so well in 2019-2021.Tesla is rapidly growing earnings, shrinking the current and forward PE ratio. The media is not smarter than the market. Even really smart people, including a theoretical physicist, was wrong about Tesla. The stock market is one of those things in which intelligence is not always an asset and may even be a liability.

Bay Area prices keep going up, up 20% year-over-year. Looks like I was right again. Here are some Bay Area zip codes which have done really well since 2013: 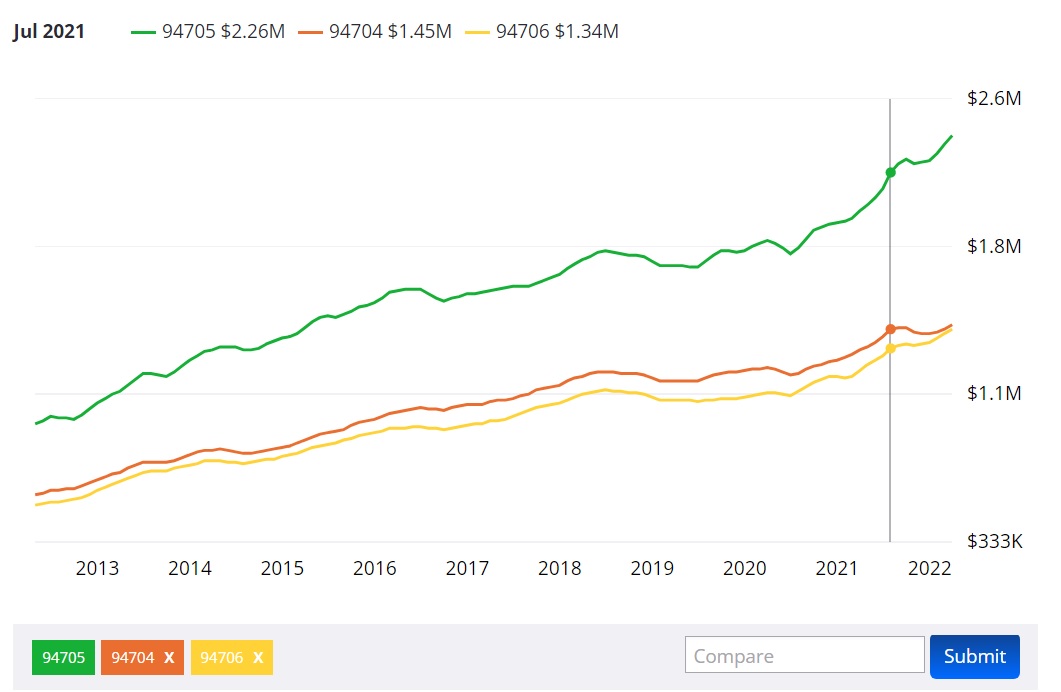 Prices will keep going up, as much as everyone complains about unaffordable housing. It’s one of those thing in which everyone seems to agree there is a problem, but similar to surging gas and oil prices and student loan debt, there are no good solutions. Just building for the sake of building does not address why some areas are more expensive than others, such as jobs, short commutes, good schools, and overall desirability. Outside of the Bay Area, there is tons of housing. The major downside is 2-4-hour commutes, but it exists.

Few good alternatives. You cannot just cancel Windows or Office like you can cancel your Netflix subscription. There are few good alternatives to Facebook, Instagram, or YouTube. The value of a social network is that everyone you know is already on it.

The big problem facing Netflix now is it’s not ubiquitous. No one needs Netflix like they need Windows, Amazon, or Google. Netflix has original programing, but this is not enough. If original programing is the cornerstone of Netflix’s business, then that just means it’s trying to copy Hollywood then. Also, Netflix keeps raising prices. There is nothing to stop other large tech companies, such as Apple, from licensing digital content and undercutting Netflix at a loss.

I was right in October 2021 about the overhyped Facebook whistleblower story, Frances Haugen, being a nothing-burger, writing:

Facebook is in the news again because of controversy regarding whistleblower accusations that Facebook management suppressed information regarding the mental health effects of using Facebook. My prediction-like similar media controversy in 2018 in which I was correct that Facebook would recover and the stock would go higher–is that the whole thing will blow over. Nothing will come of it, in large part because no laws were broken, and Facebook is still a hugely profitable and successful business, and no one cares. Facebook being a shitty company in and of itself is not a crime, and controversy is hardly new to Facebook. I think at worse Facebook may face civil litigation. Outside of the media bubble and the blue-check Twitter echo chamber, The average Facebook or Instagram user or advertiser does not care about this. The job of the media is to create a false consensus.

Nothing came of it. This has to be the fastest I have seen a major story vanish from the headlines and collective public memory. By November, Covid had dominated the headlines again. Yet again, the job of the media is to try to get people to care about things that are not that important or overblown. The only reason why I remember now is because I was reading one of my earlier posts when I was reminded of it. Otherwise, I would have completely forgotten.

Russia-Ukraine continues to be the slowest war ever. I remember two months ago we were told by the media that Putin was Hitler and this would be WW3. I was correct again that there would be no escalation, no US troop deployment or involvement beyond assistance to Ukraine in the form of intelligence data, which means relaying to Ukraine the location of Russian tanks.