In the comments, someone asked my opinion about real estate. As I have been predicting since I started the blog (for example, a post from 2015 in which I predicted Bay Area home prices would go higher, and gave a list of reasons, which they have, and that was even after they had surged in 2011-2014 ),I predict home prices will keep rising, especially the Bay Area on an inflation-adjusted basis, owing to scarcity, foreign inflows, demand from newly-minded Silicon Valley tech millionaires, and as a consequences of the pandemic. Interest rates will remain low, as will mortgage rates.

James Altucher, who is a critic of real estate, cites a stat that home prices only gain .4% per year.

A) Cash Gone. You have to write a big fat check for a downpayment. “But its an investment,” you might say to me. Historically this isn’t true. Housing returned 0.4% per year from from 1890 to 2004. And that’s just housing prices. It forgets all the other stuff I’m going to mention below. Suffice to say, when you write that check, you’re never going to see that money again. Because even when you sell the house later you’re just going to take that money and put it into another downpayment. So if you buy a $400,000 home, just say goodbye to $100,000 that you worked hard for. You can put a little sign on the front lawn: “$100,000 R.I.P.”

This is false. (He’s wrong for a bunch of other reasons too.) In the areas I recommend, it’s closer to 5-7%/year going as far back the early 90s. I have also tracked other areas and found returns to be higher than 1%. 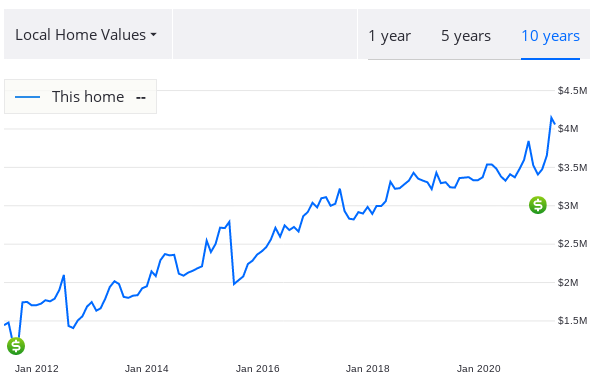 Some pundits are predicting a return to the double-digit inflation of 70s and early 80s, but I don’t foresee annual inflation rising above 3-4%. Why inflation is so low is a mystery, and there is no consensuses by economists about why. The CPI is controversial because many argue that it understates the actual inflation rate. Technology can be thought of as deflationary, yet tuition and healthcare costs have exceeded the CPI. But this can be misleading because the quoted price is not often what people actually pay. There is much more haggling and negotiating when it comes to tuition or healthcare, than the cable bill, the phone bill or the grocery bill.

Is real estate like buying REIT ETFs? No. REIT ETFs (such as IYR) are often discussed as a cheaper substitute for real estate investing, analogous to fractional home ownership, but REIT returns tend to be worse and more volatile than owning the actual property, and with real estate investing you get to choose the homes and areas you want. REIT ETFs lost 60% or more of their value from 2005-2010 but Bay Area homes only fell 40% and recovered much faster. Bay Area homes also gained value during Covid whereas the REIT ETFs fell.