By early 2021, Ark Investment’s Cathie Wood could do no wrong. Her flagship fund, ARK Innovation, was up at one point 300% from the March/April 2020 lows of Covid, compared to 70% gains for the S&P 500. Online, she had become something of a celebrity, especially on Reddit, Twitter, and YouTube. This was at around the same time GameStop stock went from $10 to $300 in 5 months. Same for Chamath, who was equally deified. No one had seen anything like it. Here was this woman whose fund defied what was thought was possible during what was such an awful pandemic. It was as if–to quote Greggory Zuckerman, author of The Man Who Solved the Market about the legendary hedge fund manager Jim Simons–she had ‘solved the market’, except, unlike the famously secretive Renaissance Technologies, anyone could invest in Ark and it was 100% transparent, not a black box quant model.

As for myself, I resisted the temptation to buy Ark, GameStop, AMC, Bitcoin, Chamath’s SPACs, or any of the other stuff that was overhyped at the time. Sure enough, as these stories tend to go, it all came crashing down. Ark peaked by February 2021 and has been in freefall ever since: 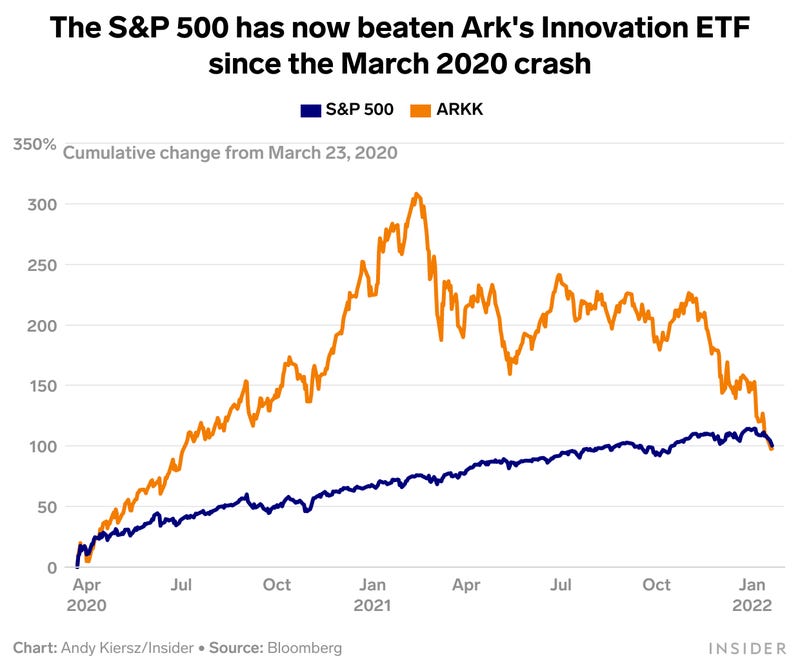 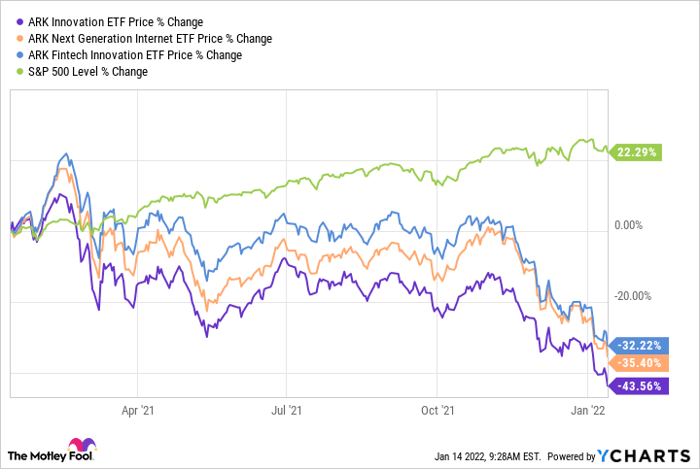 I don’t think I have ever seen anything go from being a sure-fire thing to ‘total shit’ as abruptly as Ark. Although Ark has significant tech exposure, the Nasdaq was up over 20% for 2021. So this was really a failing on her part regarding her stock picking abilities, than anything that can be blamed on macro factors.

Chamath’s SPACs have also crashed, as has Bitcoin, AMC, and GameStop (although it is still at $100 as of writing this, a 900% gain from 2020). Over and other, what is hyped as ‘the next big thing’ is often just ‘the next big dud’ by the time the masses start investing.

This market is unforgiving. A few weeks ago, Netflix [NFLX] stock fell 20% on bad earnings, and then another 10% afterwards [this blog has never recommended NFLX]:

As capitalism becomes smarter, it logically follows that investments that are deemed suboptimal will be culled and discarded without hesitation, leaving a handful of winners and a lot of losers.

So what is the solution? The answer is choosing infrastructure over growth, which is what I have been doing by investing in large-cap FAANG stocks and ETFs that have heavy exposure to them. Growth and innovation are overrated as far as investing is concerned. VCs can make money from growth stories, but by the time such companies go public they are often very overvalued and their prospects are uncertain. This results in worse returns despite higher growth. Having growth does no good if it’s short-lived due to competitors or if it’s a fad. Virtual reality has been hyped for decades as a potential growth industry but has still yet to take off, yet, decades later, businesses and individuals are still buying Windows computers. Nano technology is another industry that never lived up to its hype, but mobile/app advertising is still more profitable than ever.

Infrastructure has reliable recuring revenues backed by network effects and intellectual property. It’s not like anyone can replicate Fakebook’s social network in the same way that someone can create another type of sports shoe or brand of athleticwear. Microsoft can just keep selling Windows and Office licenses at a huge mark-up compared to the per-unit cost, effectively like printing money.

Few good alternatives. You cannot just cancel Windows or Office like you can cancel your Netflix subscription. There are few good alternatives to Facebook, Instagram, or YouTube. The value of a social network is that everyone you know is already on it.

Ubiquitous and indispensable. This means if said company were to disappear, could another company easily fill the same role? Would it cause a major disruption, or would hardly anyone notice? There are dozens of shoe manufactures or mining companies, but one Amazon, one Tesla, just a handful of major credit card companies.

Recurring revenues beat growth. It’s just simple math. IF a $100 billion company generates $10 billion in profit every year, even absent of any growth, that is still $10 billion every year that goes into shareholder equity. So you can compound your capital at 10%/year. With growth stocks, because they lose money, there is no shareholder value being created. What about Tesla or Amazon being unprofitable? Yes, they were losing money at one point, but were cashflow positive in terms of business operations, and had all the other conditions of being infrastructure stocks. Amazon and Tesla are heavily investing their cashflows into business operations (cap-ex spending).

Also, because infrastructure companies are so dominant due to the above factors, it means that higher valuations are justified because the risk of being overtaken by a competitor or falling out of favor are much lower than the in the past. If, historically, a large company has a 50% chance over a 50-year period of going out of business, this risk would factor into the present valuation, but by reducing this risk it stands to reason that valuations should rise. If the risk is cut from 50% to 25%, then this could imply a 100% higher valuation, so a PE ratio of 30 instead of 15.

It’s composed of the following companies, each with a 10% allocation, that meet the above criteria, that have been recommended and mentioned on the blog years:

(PayPal went public in 2015, so the back test only goes that far)

So what is the performance of the infrastructure portfolio? It crushes QQQ, SPY and even ARK.

The 35% CAGR is as good as the Renaissance Technologies Medallion fund (after fees), yet considerably less trading, 100% transparency, and doable from a brokerage account. Adding 2-1 leverage generates a CAGR of 70%, exceeding Renaissance’s pre-fee performance by 10-20%/year (unfortunately, there is no ETF that tracks 2x versions of the specified individual stocks, or any individual stock). The 35% CAGR even holds as far back as 2013 (PayPal is not in the backtest, because it didn’t go public until 2016).

Google, Visa, Facebook, and Mastercard are sorta like Renaissance in the sense that they generate revenues from tons of tiny transactions, such as ad clicks or credit card purchases, instead of trades, but it’s the same sort of principle. Like Renaissance, massive statistical analysis is involved, such as tracking click patterns or credit card usage patterns.

How about Bitcoin? The unleveraged version crushes that too. The infrastructure portfolio turned $10k into $40k from January 2018 to today, compared to $30k with Bitcoin, and with much less volatility (a Sharpe ratio of 1.4 vs .70). But what about pre-2018? Bitcoin’s pre-2018 performance should be treated as an outlier that will never be repeated. Given how the total crypto market stands at $1.7 trillion, compared to just tens of million in early 2017, means that one runs into the inherent size limitations of highly speculative, non-revenue generating asset.

What about bear markets or recessions? The Covid crash of 2020 was technically a bear market and a recession, with the S&P 500 at one point being down 30% from its highs, but the infrastructure portfolio recovered quickly, along with the rest of the market. Because the infrastructure portfolio is composed of some of the largest, most profitable, most dominant companies (and has Walmart, which does well even in recessions), it should do better than Ark or the S&P 500 during recessions, because large tech companies tend to be more resistant to broad macro conditions and events compared to sectors such as retail, housing, or banking.