In the past month, there have been a plethora of doom and gloom articles about web 2.0, Silicon Valley, the economy, and start-ups. In this series, I address some of the major concerns, arguing that perhaps the doom and gloom is not all warranted.

We’ve been hearing these ‘tech stocks are overvalued!’ arguments since at least 2012, yet prices keep going up.

There are a couple things to keep in mind. We’re seeing a flight to quality, with fewer yet high-quality names like Facebook, Tesla, Amazon, Microsoft, and Google participating in the post-2009 tech bull market whereas in the late 90’s, during the tech bubble, the buying was indiscriminate, which ended badly. Now Wall St. and VC is not making that mistake again, choosing instead to pile into the best of the best and selling the rest.

The aforementioned stocks (Facebook, Tesla, Amazon, Microsoft, Google, etc) have market dominance, rapidly growing earnings, strongly positive cash flows, high profits margins, and few viable competitors. In the web 2.0 scene, Air BNB, Snapchat, Dropbox, Uber and Slack also qualify as having strong growth (or projected growth) and market dominance, which is why they are valued so richly and will continue to become more valuable in coming years, especially that internet and app companies are riding the tailwind of the booming mobile advertising advertising market.

PE ratios are not that important if fundamentals remain strong. Amazon has done so well, for example, that someone who bought in 1999 at the very peak would still have a 13% compounded yearly return if he sold today. Pretty amazing. Google had a PE ratio of close to 100 in 2005 after its IPO; is has surged 1,300% since then and the PE ratio is only around 20. BIDU had a PE ratio of 1600 shortly after going public in 2005; the shares have since rallied 1,500% and the PE ratio is only 40, as well as many other examples. Contrast that to the late 90’s when companies such as Pets.com and Theglobe.com, which had inherently flawed business models, were bid to the stratosphere. These were companies with business models that had negative cash flows, with no hope of profitability. As part of how capitalism is getting smarter, nowadays, such companies wouldn’t even get past the VC seed round, let alone go pubic. So right now I’m not too concerned.

I’ll believe there’s a unicorn crisis when I see actual secondary shares for major companies like Uber, AirBNB, Snapchat, Dropbox and Pinterest see substantial declines. Until then, this is all speculation. There’s a bubble in bubble predictions. Everyone wants their ‘I told you so’ fame, for some reason. I guess it’s human nature to want to be right or to see the successful stumble back to earth.

He says there is “blood in the water,” and we are entering a 90-10 situation for the unicorn class of startups with billion-dollar valuations in which 90% of the startups will be repriced or die and 10% will make it.

Well, that’s kinda how it’s supposed to be. That’s why expected value is more important. A few $200+ billion Facebooks and Googles can compensate for a lot of smaller $1 billion failures.

A lot of market speculators lose money by believing that trends that seem unsustainable must reverse or that history must always repeat, when there are factors that can cause wildly diverging outcomes even if there are many similarities between the past and present. You can have a situation where the past matches the present with 99% accuracy, but that 1% makes a huge difference in outcomes. This is related to Chaos Theory, where small adjustments to the initial conditions can cause the evolution of a system to change dramatically. Many people lost money shorting Amazon and Facebook stock between 2012-2015, believing that we are in another tech bubble, and while there are many similarities between 2000 and now (such as high stock prices) there are some subtle differences, too, such as better fundamentals. And those subtleties can make the difference between a profitable trade and losing your shirt. Or, another example, many people got burned betting against the post-2009 stock market recovery, believing that there would be a double dip recession, that there would be a ‘Great Depression’, or that America would become ‘Japan 2.0’, when, in fact, neither happened despite the many similarities between Japan’s recession and America’s such as high unemployment and deflation.

These short-sellers grievously underestimated the propensity of the consumer undaunted by the doom and gloom in the news to keep consuming, the ability of the economy to quickly bounce-back, the efficacy of TARP and other programs to stem the bleeding, and the unimpeded ability of S&P 500 companies to keep generating record profits and earnings quarter after quarter: 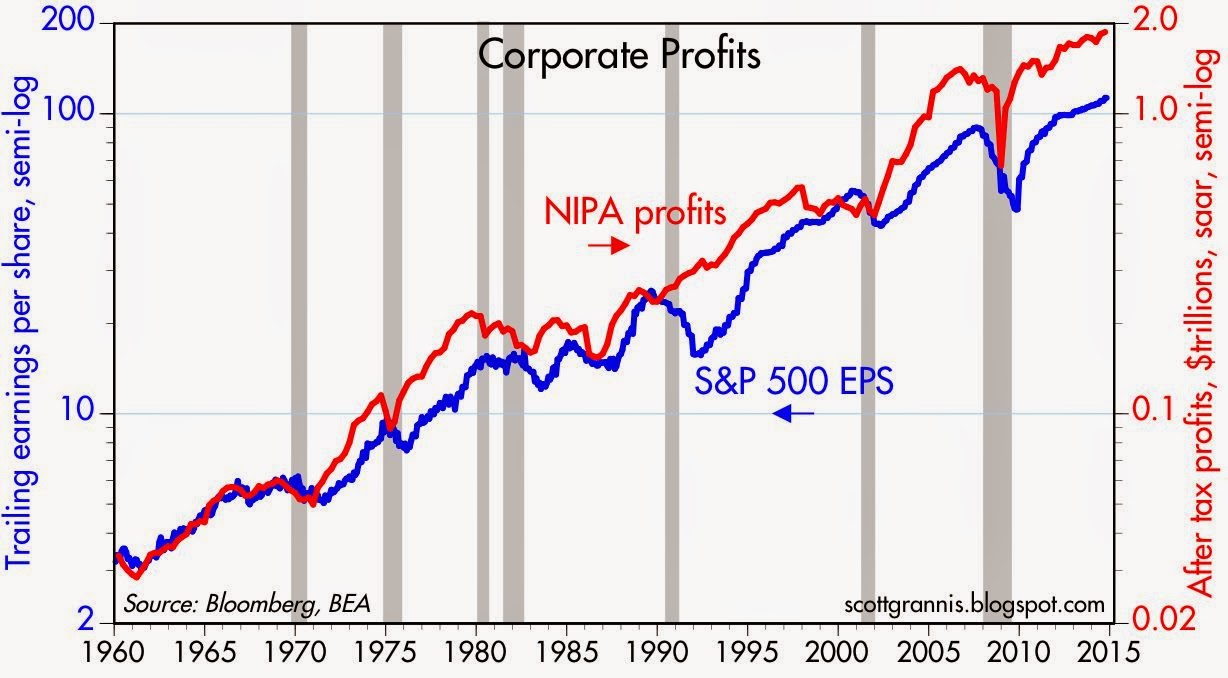 What about the fed? Aren’t they playing a major role in inflating the economy and stock market. Yes, to some degree, but not as much as commonly believed, as I explain here. The fed alone cannot account for all of the earnings growth since 2009. if this were a fed induced bubble we would expect stock valuations to be much higher, but the PE ratio is still only 15-17 for the S&P 500, which is around the historical average. QE and monetary policy is more of a band-aid than a lifeline (which is how blogs like Zerohedge interpret QE), which is is the market didn’t fall much when the fed officially ended QE in 2014.

Also, people have tendency to see patterns such a bubbles – even in a random walk – due to confirmation biases, a phenomena called Apophenia.

What it does show is that people are very receptive to data that supports their preconceived bubble theories. And this is a part of my anti-bubble theory. I’ve done posts on how the Economist magazine once bragged that it correctly predicted a bunch of housing bubbles, whereas the article it cited was actually totally, spectacularly WRONG about the future course of house prices in a number of countries. Prices actually rose in markets where they predicted declines. And yet the Economist put their “successful” prediction into an ad for the magazine. Someday China will have a big crash, and the people who have been predicting it for a long time will say, “I told you so.” And I’ll say, “Market prices rise and fall, that’s what markets do.”

Economies have booms and recessions. If talking about bubbles makes you feel good, go for it. But don’t think it’s telling us anything useful about the world. When prices are high they might crash, or they might go higher. That’s what history shows.

People complain that bubbles destroy wealth and that the government should try to prevent bubbles from forming. But it’s not like the government does a better job at managing money, which is why the concept of ‘exit’ is appealing to some in Silicon Valley. New technologies emerge from bubbles, and the only way to do away with the boom bust cycle is probably to do away with capitalism itself. If bubbles represent excess, then the bursting of the bubble removes the excess, meaning than while wealth may have been destroyed, the price level is only back to where where it was before the bubble. People who bought on the way up sell on the way down and it cancels out, which is the cornerstone of the functional stock market theory and the inflow/outflow theorem.