Articles such as The Tide Is Turning Against “Gender Studies”—Just Not Fast Enough are commonplace on Quillette.com and Unz.com, and cartoons and memes ridiculing or blaming gender studies for the ‘decline/death of America’, frequently go viral. Upon encountering such arguments, one may be inclined to believe that there is an overwhelming oversupply supply of unemployable gender and women’s studies majors and that such subjects are very popular and growing in popularity. So how popular are hyphenated-studies (such as African-American, Asian-American, Women, Gender, Mexican-American, etc.), as well as the humanities, overall? I decided to investigate, and as it turns out, much less popular than you may think, or at least much less than guys like Ben Shapiro would have you believe.

Whereas STEM departments tend to be well-funded and have expensive computer labs, AI labs, and robotic labs, as well as professor shortages and more demand than can be accommodated, due to falling attendance and low funding, many liberal arts departments (with the exception of psychology, writing programs, and economics, all which are fairly popular relative to, say, ‘queer studies’) operate on a shoestring budget, as money flows into STEM.

From New Evidence: There is No Science-Education Crisis:

…from private philanthropists to state governments, are “scaling back their investments” in the humanities, “but the federal disinvestment may be the most worrisome indicator”: “Federal research funding through the National Endowment for the Humanities, always a small fraction of the federal funding for science and engineering research, has been reduced disproportionately in recent years. The humanities and law were the only research fields in which the federal share of academic research expenditures was appreciably smaller in 2011 than six years earlier.” 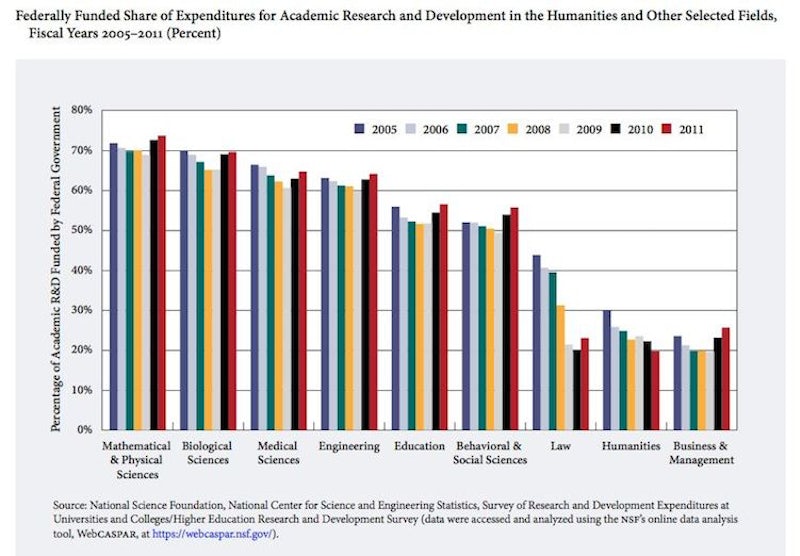 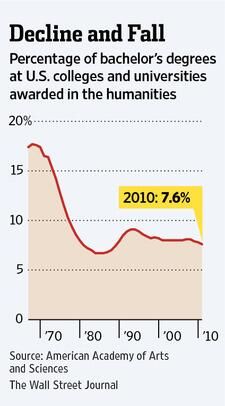 And from STEM Majors Are Accelerating in Every State, Just as Humanities Degrees Are Declining:

And degrees in the humanities, programs like philosophy and foreign languages? They’ve declined -0.4%.

Among women, the most popular majors are nursing, biology, education, social work, business, and psychology, not women’s studies. This means lots of Boas, Freud, and Jung and much less Peggy McIntosh and Haraway.

Below are the top 20 college majors that most women graduate in. Nursing is the heavyweight here, with over 120,000 women graduating with a bachelor’s in nursing in 2016. Nursing is also a female-dominated major, with 87% of graduates being women. So how many women’s studies majors per year are there? According to the article Mea culpa: there *is* a crisis in the humanities, only .3% of graduates major in “Cultural, Ethnic, and Gender Studies”, so this includes women’s studies, African-American studies, etc. 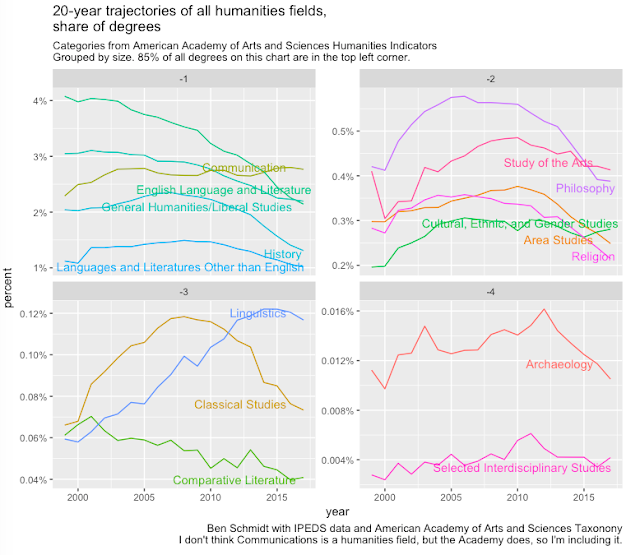 Regarding campus protests, as Jonathan Haidt notes, despite all the attention and outrage such protests get on Twitter and YouTube, protests are uncommon and mostly occur at elite coastal colleges. For example, the 2017 Berkeley protests over a planned speech by Milo Yiannopoulos resulted in vandalism and considerable media coverage, but one must remember that for 700+ days out of two year period between 2017-2018, there were no protests at Berkeley, and most protests don’t involve vandalism. Furthermore, as discussed above, given the rarity of gender studies majors, statistically, we would expect most of the people demonstrating to not be gender studies majors, but rather English, nursing, and psychology majors, which are much more common, so blaming such protests on hyphenated-studies is misplaced.

So why is there so much concern about these subjects by IDW-types even though so few people major in them? Although the pay and job prospects are worse, humanities majors have more influence on the ‘national debate’ and narrative, in terms of print media and journalism, than do STEM workers, nurses, teachers, and businesses administrators. The trade-off for less money and worse job prospects is more cultural influence. This can explain why the humanities get so much attention and are the subject of so much criticism and controversy, because of the disproportionate amount influence the humanities impart. Political and social articles that go viral on sites such as Vice, Buzzfeed, The Atlantic, The New Yorker, etc., which are read by millions of people, are primarily written by humanities majors. Jordan Peterson is correct that the ability to write and communicate well is a potent tool. Business administrators may make a lot of money, but they cannot write well and don’t have the cultural influence from writing a message that is disseminated to millions of people that humanities majors potentially have. Even if your message is correct and ‘good’, if you cannot articulate it well in written or spoken form, then it as if it does not exist.

Some see STEM as force of conservatism against left-wing liberal arts indoctrination, but such a narrative is not necessarily supported by reality. Silicon Valley, for example, despite being the ‘STEM capital’ of the world, it’s entrepreneurial-capitalist culture, and being home to some of the most valuable and profitable companies in the world, 70% of donations are to Democratic candidates, and “since 2004, 95.5% of contributions by Apple employees to local committees have gone to Democrats ($83,635 versus $3,975, respectively), and 4.5% to Republicans.”

If I had to diagnose the problem, the root cause of so-called left-wing indoctrination is not the teachers, but rather the donors that fund the institutions that employ the teachers and disseminate the literature. The profits from capitalism trickle down to institutions that are not as profitable but have a lot of cultural reach, such as think tanks, movie studios, universities, and print media such as magazines and newspapers. For example, there is the University of Michigan Helen Zell Writers’ Program. Who is Helen Zell? The wife of Sam Zell, a billionaire businessman. I would even go so far as to say that without the ‘robber barons’ of the late 19th century and early 20th century, who heirs bequeathed their vast fortunes to such institutions, among other recipients, there would have been no 60′s counter-culture.

Why did I write this? Because I want/seek the truth, even if it’s counter-narrative. I’m tired of hype and just want the facts. If you asked me a month ago what percent of college students major in gender studies or women’s studies, I would have given a much higher answer than the actual answer.