Came across this excellent article: “The Year of Fukuyama: American Triumphalism and “Normie Theories of Democracy”

It’s interesting how relevant and debated Fukuyama still is. If not for that 1992 book, how many people would still care about him (although the same could be said for almost any famous public intellectual or author, as most of their fame rests on the back of a single seminal work). I hate the advice I often see to ‘touch grass’. Fukuyama never touched grass yet is hugely influential. It would seem as if writing a prophetic book is a better strategy.

But as I wrote many times before, like here in 2018 and again in 2020, I think Fukuyama’s thesis is still correct in spite of Russia, and same for the ‘Western liberal democracy’ hegemony, which is still mostly unchallenged.

It’s been two decades since 911 and no repeat of anything close in similar magnitude, although there has been an uptick in mass shootings. It’s been three decades since the Cold War, and no reunification or proxy wars. Putin is struggling to secure even just parts of Ukraine, let alone recreating the USSR. Outside of China, Cuba, Vietnam, and a few pockets in South America, Communism has died out or has converted to a hybridized system of a highly regulated private sector with a single-party Communist government. There has been nothing approaching a repeat of the Civil War, the Cold War, WW2, WW1, etc.

I don’t think any major countries slid backwards. Iran already had its revolution a decade earlier. After the revolution, Iran’s Islamic constitution was approved by 99.5% of voters, as an example of democracy making things worse (or leading to an undemocratic outcome, which was not the first time this has happened in history). Regarding China, no one was predicting in 1992 that it would adopt western-style democracy. One of the great ironies of 20th century history, even governments with some of the worst atrocities on record had elections and constitutions.

Maybe politics is more extreme in some areas, like Turkey, Hungary, or Brazil, but there are still elections, which is consistent with Fukuyama’s thesis. The Ukraine-Russia conflict possibly jeopardizes his thesis, but even then there were similar conflicts in the ’90s in that area, like the Yugoslav Wars. Or the Battle of Mogadishu in 1993, or the numerous civil wars in Africa in the ’90s. Fukuyama never promised a world free from conflict (maybe take that up with Pinker).

Regarding China, he asks if China’s zero-Covid policy is motivated by fear or a desire to impose control:

There are mistakes political systems make that are understandable, could have been made by anyone, and have no wider relevance, and others that teach a broader lesson. I don’t pretend to know what is ultimately motivating Chinese leaders. Perhaps they are extremely neurotic about risk and want to save every life they can, or they will always choose maintaining control and sticking to vanity projects over freedom and economic progress. Either way, it doesn’t bode well for the future prospects of the country.

I disagree with the framing of China being autistic (although that was Thiel’s phrasing). It’s a political strategy. China’s ‘zero Covid’ policy is less about Covid per say, but about control and compliance. I think the doom and gloom about China is possibly unsupported by the evidence. For example, in spite of drastic Covid restrictions, China had a huge 2021 in terms of GDP growth (and 2022 is also looking really strong): 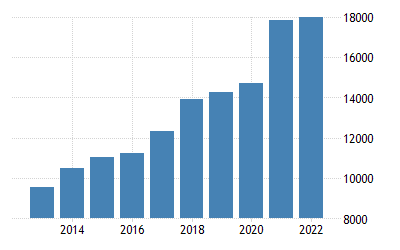 I think this can be explained by how the lockdowns in China are not constant or everywhere, but only limited to certain areas. So one may be under the mistaken impression that China is fully locked down all the time, but rather it’s limited to some cities or some ports, and then those restrictions are lifted, and then new ones are put in place if the virus resurfaces. This is an example of how social media can make things seem worse or create a distorted view of reality. News of the Ikea lockdown made headlines everywhere a month ago, but what is lost in outrage or social commentary is just how huge China is: over 1.4 billion people. An Ikea, a port, or even a city locking down is tiny relative to how big China is.

Similarly, when a hugely viral story of a professor who recently got fired made the rounds, what is overlooked is that there are over 135,000 college professors employed in the US; this is a very uncommon occurrence despite how much inordinate attention on social media and blogs there is when it does happen. People get fired all the time for stupid reasons, for all professions, and no one in the media cares, but in higher ed this is something that is apparently never supposed to happen and is a major crisis that threatens to topple the pillars of Western Civilization. No one is writing blog posts about fired Chipotle workers. Or fired lawyers. Or fired patent clerks.

[To go off on a tangent, I find it odd or amusing how some of the same people who extoll the virtues of unfettered free market capitalism or at-will employment, somehow this is off-limits when it comes to higher ed, even when students/parents are the consumers of the product, paying tens of thousands of dollars a year in tuition, and thus should have some say in how it’s run. If a salesman does not meet a quota, or if a mall Santa scares the kids, everyone would agree the salesman or Santa should be fired, but this does not apply to the teaching profession.]

China is one reason why semiconductor stocks have done so well since early 2020, and this is in spite of Covid. The past three years has seen this industry that otherwise seemed boring and dated compared to ‘clouds and apps’, suddenly explode to the forefront. Self-driving cars depend on these chips, and Tesla is a major customer.

I think much of this anti-China rhetoric by US politicians is hollow. No one wants to piss off such a major economic partner, even if their values are not aligned with ‘ours’. Although, interestingly, under Biden Nvidia was restricted from exporting some of its AI chips to China. Between this and the pullout in Afghanistan, maybe Biden is America’s first truly nationalist president, more so then even Trump. ‘Beijing Biden’ proved to be one of the less accurate descriptors.

He concludes by predicting that things will remain mostly the same, which I agree:

I anticipate that in many ways American society will be all but unrecognizable after a few decades. But the major pillars of our economic and political system won’t change. We’ll still have elections, the peaceful transfer of power, the House and Senate, a 9-member Supreme Court that acts as the final interpreter of the laws, a global empire with bases in over a hundred countries abroad, millionaires and billionaires who carry a disproportionate share of the tax burden, social security and Medicare, growing racial diversity, increasing class stratification based on IQ differences and assortative mating, no major secession movements, and virtually zero political violence.

Every four years democracy dies, like in 2000 after SCOTUS awarded Florida to Bush, or in 2016 or 2020 (after Trump and Biden stole their respective elections according to the opposing side), yet despite democracy always being on the brink, it endures. People may have less trust in the democratic process or in the fairness of elections, but elections are not going away.

I agree with Hanania that many of these supposed threats to democracy, the status quo, or America are either illusory or overblown. As I wrote a few months ago, the stakes are low despite the apparent intensity of the culture wars, especially online. With 300 million people, it’s always possible to find something that is going wrong and post it to social media. BLM and antifa protests are artificial/astroturfed, hence why they tend to be so short-lived and contained and end on a moment’s notice.

Remember how the overturning of Roe v. Wade was hyped by the media as somehow being a spark that would trigger societal unrest (led by women who cannot get abortions as easily as they would have in the past for a handful of states, as somehow being a major destabilizing event, I suppose), and after weekend of ineffectual marching, everything returned to normal and hardly anyone talks about it anymore. Same for elite overproduction, which has created armies of angry and overeducated but otherwise harmless people, which has not bled into real life.