Bitcoin poised to fall much lower:

Note above how none of the smoothness and concavity conditions are in place for Bitcoin to go higher. This means it has not stopped falling. The orange circles show a smooth, compressed, concave price behavior, but the blue circle is the opposite of that, being jagged , convex, with a wide price price range (even after accounting for the scaling of the y-axis). I am probably the only person who has observed this. Most people look at moving averages or support or resistance lines, which tend to be useless. If curvature plays such an important role in describing universe, like general relativity, why wouldn’t geometric concepts, such as ‘curvature invariants’, play role in the financial markets too.

Note: this only works for closed-type systems governed by supply vs. demand, not index funds or individual stocks, in which there are external factors such as economic fundamentals, fed policy, pension fund inflows, passive investing, buybacks, profits and earnings etc. Profits and accumulated cash effectively provides a floor for how low stocks can fall, which creates a bias in favor of being long stocks.

Foreign currencies are continuing to crash like I said they would. The ‘great convergence’ is still in effect as global wealth pours in the relative safety of US dollar: 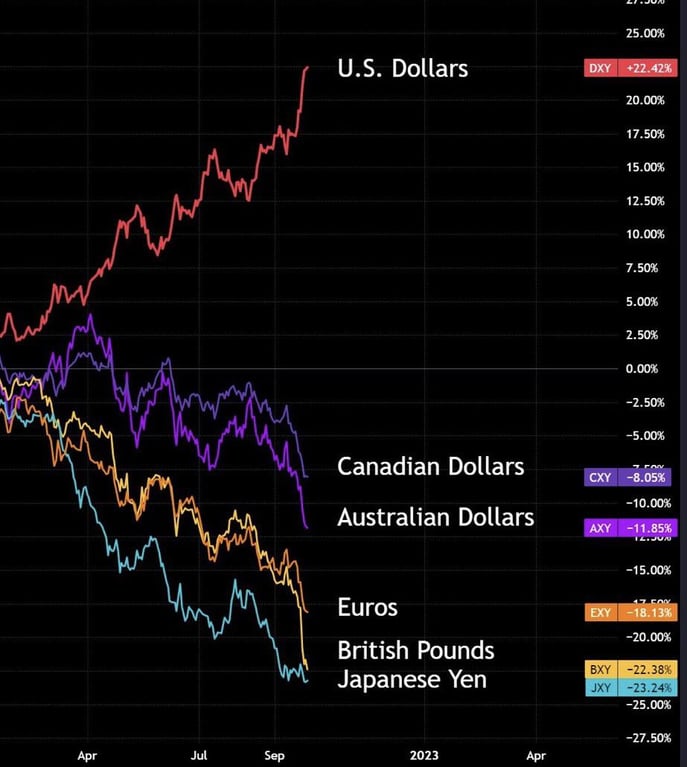 This shows over and over again that whatever problems the US is facing, things are way worse in Europe. Instead of 8% inflation here, energy prices are expected to surge 50-80% in the UK and Germany. People still are being arrested in the UK for tweeting, so wokeness is worse there, too. The UK has been in permanent-crisis mode for the past 14 years: first the global financial crisis of 2007-2009, the Greece/Portugal debt crisis of 2010-2012, Brexit, Covid, the Queen dying, and now this. Also, brain drain, incompetent leadership, etc. Sure, the US does not have the most competent of leadership either, but it has a huge, robust private sector, like Microsoft and Amazon, which the UK and Germany does not have.

At some point US stocks will recover as soon as inflation concerns abate. Tech stocks will recover so fast. Knowing when this will happen is not that important, but historically speaking, 25%+ declines are uncommon and are followed by sudden rallies. But Bitcoin, the Western European economy, and Pound and Euro will not recover or only a little.