Biden and Trump have among the lowest approval ratings of recent presidents, or at least as far back as records exist for this sort of thing. Biden’s approval ratings are around 40%, which is comparable to Trump at a similar stage of the latter’s presidency: 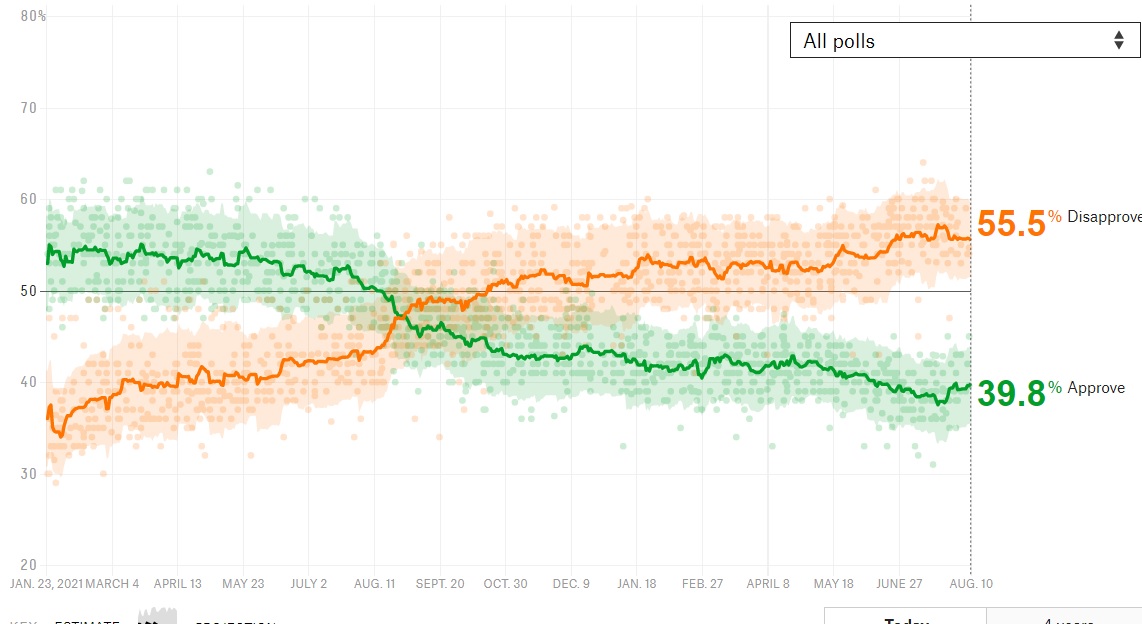 So, that’s two consecutive presidents who have persistently sub-40% approval ratings. It’s so bad you have to go as far back as Truman, in 1947, to find a sitting president who had a lower approval rating at a similar stage of his presidency. Or maybe Ford in 1976. George W. Bush’s approval ratings got as low as 30% by the time he left office due to a combination of the the Iraq War quagmire and the financial crisis. But two years into his first term, Bush still averaged high approval ratings. So what is going on here? It would seem as if no one has any confidence in anyone or anything.

I am reminded of a Tyler Cowen remark regarding healthcare during a podcast. He argued that a major reason why Americans spend so much on healthcare on a per capita basis is because they prioritize it…they want individualized, convenient treatments and slow wait times, which is expensive, not diet modification and exercise, which is slow and less convenient but cheaper. Americans will spend a lot of money to prolong their lives and in pursuit of quick fixes to chronic problems, whether it’s heart disease, obesity, or diabetes. So the marketplace for healthcare reflects this demand for convenience and speed.

I think the same preferences framing also applies to leadership…leadership is bad, whether it’s Pelosi’s alleged insider trading, a do-nothing and out-of-touch Congress, and a borderline senile president, because good leadership is not being selected for. People, collectively, do not value it that highly, so what we get is our current ‘sorry’ state of leadership, because that is what the market has selected for. In the ’40s, 50’s, and 60’s perhaps it was the opposite, which is why presidents of that era, during and after WW2, tend to rank much higher on lists/surveys of ‘historical rankings of presidents’.

Other factors include the rise of the private sector and business-celebrities such as Elon Musk, Jeff Bezos, and Joe Rogan. Entertainment is more important than leadership, perhaps. 70 years ago, entertainment choices were more limited, or the popular entertainers of the time were understood as only being entertainers, whereas someone like Rogan, and before him, Jon Stewart, fills the role of an entertainer and cultural/political critic. People don’t need politicians or religious leaders for guidance or as moral authorities when e-celebs and entrepreneurs fill that role. But given the piss-poor quality of leadership, it’s a sort of feedback loop: people turn to e-celebs and entrepreneurs because politicians and religious leaders are so morally and ethically compromised, but this in tuns leads to weaker leadership and worse leaders.

The weakening of the executive branch is another possible factor (the so-called ‘vacuum of leadership’). In response to 911, Bush created the Department of Homeland Security, in 2002, and signed the Patriot Act, in 2001. By comparison, there was no national legislation in response to Covid except for various stimulus programs; the actual legislating was left up to the states to decide how few or how many restrictions to enact. Indeed, the shrinking of the power and influence of the executive branch mirrors the growing influence and branding of governors and congresspeople, such as Marjorie Taylor Greene, Lauren Boebert, Greg Abbott, and Ron Desantis, all of whom saw a massive surge in popularity and media coverage since 2020, in large part due to opposition to Covid restrictions, the perception of the 2020 United States presidential election having been stolen, and Biden’s falling approval ratings. Even the judicial branch is overshadowing Biden, such as the overturn of Roe v. Wade–a major loss for the left.

Another possible factor is that voters increasingly care about the economy. The post-90s era of the ‘home as an ATM’ and the 401k, had made the economy a top issue. It’s only relatively recently that homes were considered investments instead of just dwellings. But solving economic issues does not really require good leadership, but rather either printing money for stimulus (for the left) or tax cuts (for the right) but otherwise not doing much. It’s not like trying to fundamentally build a new society or major reforms (like what Lincoln, FDR, Washington, Jefferson, and LBJ did), nor a call for civic action, like during wartime. The absence of major conflict or unrest, means that economics issues will tend to dominate, not militaristic ones (the so-called ‘long peace’ as described by Steven Pinker is still intact, despite Ukraine vs. Russia, and the Cold War is long over). The economy is something that is autonomous that generally works best when left to its own accord, with minimal intervention.