Credible sources are still entertaining the possibility of societal or economic collapse of the US. People are obsessed with this topic. Maybe they see collapse as an opportunity to break from the monotony of consumer capitalism, or they are bored, or something to do with ‘bullshit jobs’, which seems to come up in every discussion about collapse and the decay of society.

There is still scant evidence to suggest the collapse or unrest in the US. Even compared to 50-100 years ago there is less unrest in the US despite BLM and antifa. For all the talk of gun violence today, in the 60s-80s alone there were numerous assassination attempts, some successful, on political leaders and other important public individuals in the US, such as John F. Kennedy, George Wallace, Lincoln Rockwell, Ronald Reagan, John Lennon, Robert F. Kennedy, Martin Luther King, and Malcolm X.

In the nineties there were many successful terrorist attacks and unrest, such as numerous abortion clinic bombings, Ruby Ridge, the Waco siege, the 1996 Atlanta bombing, the 1995 Oklahoma City bombing, and the 1993 World Trade Center bombings. And then also the race riots of the 60s and 90s, such as the Watts riots, the Rodney King riots, the 1967 Detroit riot, among others.

Fast-forward to today and although people seem angrier and more divided than ever online, it has not led to the sort of violence like in the past. The death and injury toll from the 2020 George Floyd riots, as bad as those were, is still small compared to the Rodney King riots. Despite the ongoing hype about Jan 6th, only a few people died and it was contained within hours. It was not the undermining or subversion democracy and the democratic process as the media made it seem.

Indeed, despite an uptick of violent crime in 2020, the multi-decade trend of declining crime rates is still intact:

Revolutions are typically spurred by poverty, not necessarily wealth inequality. This was the case with the French, Russian, and Chinese revolutions, and also the rise of Nazism . Usually revolutions make things worse, but there are exceptions. [0] Famine was a cause of the Chinese Communist Revolution:

Even in areas where most peasants owned their own land, the plots they owned were so small and infertile (almost completely lacking in soil fertility) that they remained on the edge of starvation.[19] Periodic famines were common during both the Qing Dynasty and the later Chinese Republic. Between 1900 and the end of WWII, China experienced no less than six major famines, costing tens of millions of lives…

People will tolerate significant economic inequality provided basic needs are met. Inequality may be blamed for such needs being unmet, not that the inequality itself is causal. Not uncommonly pundits will show a chart that wealth inequality is the highest since the late 20s, suggesting a sort of cyclicality in which wealth inequality will fall again: 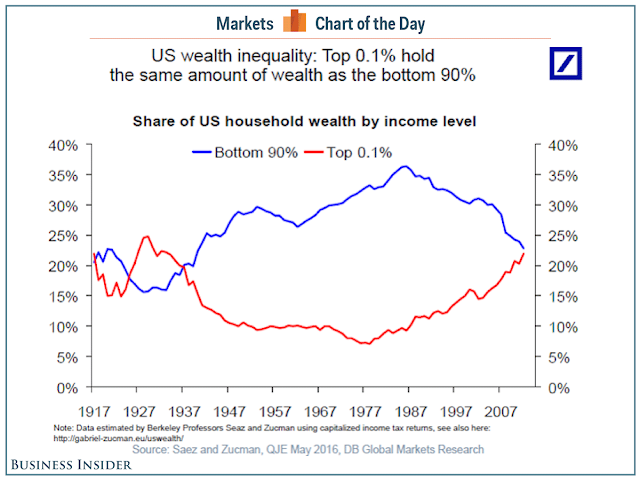 I strongly disagree with this. There is no ‘iron law’ that wealth inequality must fall after a certain threshold is crossed or that history must be cyclical. Provided living standards keep rising, for everyone including the lower classes, and existing trends remain intact, there is no reason to expect anything to change.

Outside of certain Appalachian regions or homelessness, poverty does not really exist in America anymore. Poor families are inundated with aid, like housing, dental, education, misc. subsidies, credits, welfare, etc. It’s not uncommon to go to a McDonald’s in an urban area and see large, lower-income families in which everyone has nice clothes, the latest iPhones or Androids, and a high standard of living overall even if they are technically at the poverty line, although aid for individuals is much less generous compared to families. The money is evidently coming from somewhere. Compared to the UK, even poor Americans have a better standard of living.

By almost every metric, economically, the US is in stronger shape compared to elsewhere. The stock market had one of its biggest weeks ever and keeps going up. The 2022 recession is likely already over, as equally brief as the Covid recession of 2020. Amazon went up 10% on earning, and there are five tech companies in the US worth at least $1 trillion each, those being Tesla, Amazon, Google, Apple and Microsoft. There are no such European equivalents of trillion-dollar tech companies; the closest is China, which has Alibaba. Or maybe Spotify, founded in 2006 in Sweden. US GDP recovered its Covid losses in just a little over a year, the fastest in the world. The dollar is at close to record highs, again not indicative of collapse and is further evidence of confidence in the US financial system.

The drug abuse and homelessness epidemics are a problem. Parts of America seem even worse than 2nd world countries at this point. If not for certain economic hubs like California or New York, the US would be in worse shape and closer economically to that of Europe. You can see how by the end of the 19th century the US began to pull way ahead of Great Britain, and at an accelerating rate:

These handful of areas, like the Bay Area and Seattle (home of Starbucks, Microsoft, and Amazon), are pulling a lot of weight. It’s like you’re wondering, “How are things so strong economically when otherwise so many people are ‘out of it’ and are not contributing?” Home delivery is one of the fastest growing industries now even though the pay is poor; for many people, this is the best they can aspire to.

Admittedly, a case can also be made that government has gotten worse. The PPP loans and other Covid stimulus programs had considerable waste and didn’t help the economy much relative to its cost. The ‘Inflation Reduction Act’ and the $250 billion ‘Domestic Semiconductor Manufacturing Act’ are inherently at odds with each other. The Biden administration seems like one of the worst ever. The President doesn’t know if he has Covid again or not, and this is a year after he promised that the vaccines would significantly stop the spread of Covid. I think a certain amount of badness is a built in feature of American government.

But in spite of this, the evidence suggests that other countries are collapsing instead of the US, or closer to it. Turkey, Venezuela, Brazil, Russia, and Siri Lanka have high inflation and unrest and are much closer to collapse then the US, yet pundits keep predicting collapse here. In summary, my advice is to stop waiting for the collapse. It’s not going to happen, or you will be waiting a long time.