If having a syringe, an LBGT flag, a BLM fist, and or Ukraine flag in your Twitter handle signifies support for ‘the current thing’, then having #bitcoin hashtag in your profile description and or having an NFT-themed avatar, signifies being an idiot who has lost or will lose a lot of money.

Here’s one such example: 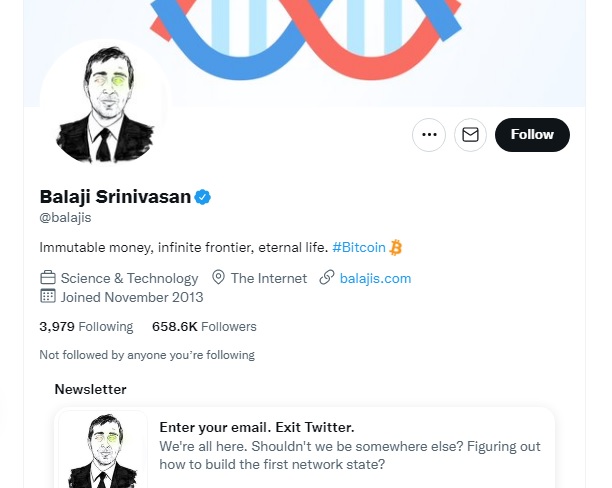 He’s a former CTO of Coinbase and has some notoriety for occasionally making controversial remarks or associating with controversial people, but outside of Twitter he’s pretty much a nobody. I am not sure how someone who is so mediocre is held up as this ‘great expert’ or genius when clearly he’s not.

“Immutable money?” How about “no money” because that is where things are headed. Bitcoin has lost 1/3 of its value in just June alone. This is on top of already losing 55% of its value, for a total decline of 75% from the peak in November 2021. To put it another way, investing in Bitcoin at its peak would have been like investing in Bear Stearns, Freddie Mac, Fannie May, or Lehman Brothers in early 2007. Or WorldCom or Enron in early 2001. The chart of Bitcoin follows the trajectory of Enron almost perfectly. It took Bitcoin and Enron roughly 8 months to fall 70%.

Bitcoin is not like buying Amazon stock in 2002, which like Bitcoin had lost 75% of its value. Amazon does not need a cult to try to tell people how great it is. Amazon succeed because it proved useful and people used it at their own volition, not because Amazon customers had to be brainwashed that Amazon was a new paradigm of commerce. Web3 is not at all like ‘Web 1.0’. I never never seen anything hyped so much which is otherwise useless. The World Wide Web proved useful and caught on almost instantly such as Amazon, Yahoo, Lycos, etc., but a decade later and crypto is still slow, unusable, and a niche, and at best only poorly imitates existing services and payment protocols.

Amazon stock came roaring back in the 2010s after falling so much in 2001-2003. The same is not going to happen with Coinbase stock or Bitcoin. The tech stocks and 3x funds I recommended are down a lot, but it’s a certainty they will recover soon (as in a few years at the latest), but Ethereum and Bitcoin are almost certainly never coming back, or at least not within this decade.

At least no one lost money over vaccine hype. Few people lose their life savings over stupid or faddish political beliefs, unlike bad investments. Even the amount of money donated for Ukraine aid, which is also another scam, pales in comparison to crypto losses. The ‘$40 billion Ukraine bill,’ which has everyone up in arms, is just the size of Luna/Terra losses alone. Now multiply that by 20-50 to get an idea how big crypto losses are.

People like Balajis and others who tend to be involved in tech or venture capital are ‘professional morons’. They are high-profile professionals who have a lot of money and clout in various tech and investment fields despite being sorta dim or wrong about many things. It’s like you’re wondering, “How is this guy so rich if he’s so dumb or if his advice, investments, and or insights are so bad?” Think of the pointy-hired boss from Dilbert. See also Putt’s Law.

The time to have put the hashtags #bitcoin or #ethereum in your social media bio was pre-2017. If you’re still telling people to buy crypto in 2022, not only are you way late to the party, you’re doing your followers a major disservice. Late adopters always get burned as the early adopters cash out. It happened centuries ago (the South Sea Company, the East India Company, the Mississippi Company), it’s happening now [1].

That’s not to dismiss all people who are in technology as idiots. Curtis Yarvin is a legit genius although I may disagree with him on some things. Yarvin, like myself, is bearish on Bitcoin, but was wrong in predicting in 2013-2014 that the federal government would try to shutdown Bitcoin, which it hasn’t. I didn’t think the government would ever take such drastic steps. In early 2013 at $100 I invested in Bitcoin because I thought that it would ride a hype cycle that would make it worth as much as half a trillion, like Facebook and other hot growth companies. Which did happen, and I cashed out in 2018 at a much higher price. At that point, after seeing that the hype had worn off that Bitcoin would no longer be able to generate long-term real returns being that it cannot generate profits. This would in turn make Bitcoin much more like gold or oil than a growth stock/story, hence no reason to own it.

Also despite being prolific on Twitter, his volume of tweets has suddenly dried up, having only made two tweets since April, both on June 10th. This almost certainly has to do with Coinbase stock and Bitcoin crashing and losing a good chunk of his net worth, which is a major blow to his ego and confidence. I have observed this with others as well, who were pumping crypto 4-12 months ago and now are much more quiet on Twitter.

The deal is done. But the campaign has just begun.

This is the true election. The establishment will throw everything it has at @elonmusk to preserve their power. To win, he needs a way to align all Twitter users behind him.

If you think Elon is a brilliant businessman wouldn’t you rather buy shares of the actual company he runs, that being Tesla, than Bitcoin? Tesla stock gained 11% on Monday, whereas Bitcoin hardly did much of anything. It’s evident and not surprising that investors would rather invest in a company that will generate tens of billions in profit annually and be a major global player in energy infrastructure and transportation, than digital tokens.

[1] This typically only applies to non-revenue generating assets like collectibles and commodities or overt asset bubbles. Large cap tech stocks are a possible exception to this rule, and are good investments even for late adopters. Google stock will still generate superior returns for investors 15+ years after its IPO and having done so well, because Google makes so much money.