Scott Aaronson weighs in on the overturning of Roe v. Wade :

In 1973, the US Supreme Court enshrined the right to abortion—considered by me and ~95% of everyone I know to be a basic pillar of modernity—in such a way that the right could be overturned only if its opponents could somehow gain permanent minority rule, and thereby disregard the wills of three-quarters of Americans. So now, half a century later, that’s precisely what they’ve done. Because Ruth Bader Ginsburg didn’t live three more weeks, we’re now faced with a civilizational crisis, with tens of millions of liberals and moderates in the red states now under the authority of a social contract that they never signed. With this backwards leap, Curtis Yarvin’s notion that “Cthulhu only ever swims leftward” stands as decimated by events as any thesis has ever been. I wonder whether Yarvin is happy to have been so thoroughly refuted.

This shows how insular the bubble is. According to even Vox, which is hardly a source favorably biased to conservatives, it’s not even close to 95%. 85% of Americans support ‘some’ abortion rights, but this encompasses a huge spectrum of what such rights entail. This includes partial birth abortion, but also abortions only under very limited circumstances (like rape or severe disability). This means there is also considerable overlap between the pro-life and pro-choice side in this 85%, became many on the pro-life side support some exceptions. It’s impossible to come up with a poll in which a majority Americans, sampled from the general population, support Abortion except under heavily restricted conditions.

As was made acutely obvious in 2016, the lesson is that left-wing positions are not as popular or self-evident, whether it’s vaccines, mask mandates, or abortion, as they (the left) want to believe such positions are. Does this apply for right-wing positions, possibly, but I think the left tends to frame their values as being universal, like universal healthcare, human rights, education, etc…Even if they are universally applicable to all, it doesn’t mean people will not push back. When conservatives lose, because their values are more exclusive than inclusive, it only seeks to reinforce this exclusivity, so I think this is why conservatives are perhaps more content with losing compared to liberals.

After decades of losing the culture wars, this is a major win for conservatives, and will boost morale and turnout. The belief that moderate conservatives will be repulsed by this and stay home or defect, or at least enough of them will defect as to hurt Republicans in important elections, is wishful thinking.

There aren’t many options for the left legislatively, due to the 10th Amendment. It’s not like Congress can pass a law to force states to allow abortions. It would have to be more indirect, such as perhaps allotting federal land for abortion clinics, similar to military bases, or making certain federal funding contingent on allowing some abortions.

My own take is somewhat different. I think both sides are irrational, but in different ways. The left believes in the sanctity of Covid victims and POC, and and the right believes in the sanctity of fetuses. Both of these strike me as irrational. Just put the delineation/demarcation at 20 weeks, which is is slightly below the threshold of viability, and call it a day. This is yet another example of how states’ rights only create needless complications, inefficiency, and more government. The number of abortions annually in the US is small anyway, and has been falling for decades, so it’s not like this is a worsening problem that necessitates such drastic measures.

Unsafe, deregulated abortions may incur greater healthcare costs compared to safe abortions, due to complications. Paying for ‘abortion tourism’ is expensive and not viable for many states.

Abortion imposes no externalities. It’s not like trying to get someone cancelled or looting/robbery (like during the 2020 BLM protests). It’s not like public education, which costs tax payers a lot of money. This makes abortion more like a negative liberty, which is consistent with libertarianism, not a positive one. If you believe that abortion is murder, then this libertarian framing goes out the window.

Abortion may be eugenic. According to a 2020 updated study by Donohue and Levitt, who in their 2005 best-seller Freakonomics popularized the abortion-crime hypothesis, found that abortion is still possibly an effective prophylactic against crime. “We estimate that crime fell roughly 20% between 1997 and 2014 due to legalized abortion. The cumulative impact of legalized abortion on crime is roughly 45%, accounting for a very substantial portion of the roughly 50-55% overall decline from the peak of crime in the early 1990s.”

The spike in homicides in 2020, combined with the George Floyd protests which led to billions of dollars of property damage and looting, suggests that this eugenic effect may be wearing off as the annual per-capita abortion rate keeps making new lows: 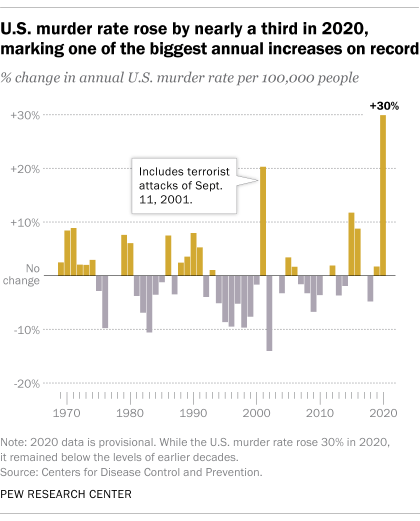 Unfortunately almost every single metric of societal decay–homelessness, mental illness, permanent joblessness, drug addiction/opioid epidemic– has gotten worse over the past few years, so this probably suggests that having more abortions, not fewer, could in the long-run (decades from now) improve overall society. There has always been some fraction of society that is non-contributing, but it would seem as if recently this fraction has grown.

I think peer or political pressure also plays a possible role in Republicans being so overwhelmingly pro-life, and that stated preferences don’t reflect true/internal ones. Just as moderate liberals have to pretend to go along with the SJW/BLM agenda. It’s expected that Republicans, conservatives are supposed to be pro-life even if it means tolerating more crime, worse demographics, or imposing an inconvenience on even their own lives.