It’s not news that America’s homelessness problem seems to have gotten worse over the past decade. Although homelessness has fallen or stayed the same since 2007, especially after adjusted for population growth, the number of tent cities has surged since then. The tents dot freeway onramps, lawns outside of strip malls, along sidewalks, parks, etc. Not just tents, but also RVs, trailers, and camper trucks that serve as semi-permanent housing. In addition to the usual factors such as drug addiction, mental illness, or some combination thereof, housing unaffordability is likely an important contributor.

Although homelessness in San Francisco and Seattle has received disproportionate media coverage, it’s everywhere. From yale.edu The Rise of Tent Cities in the United States:

Because of the economic recession and the financial and mortgage foreclosure crises, homelessness has increased and intensified in the United States over the past several years. According to the U.S. Department of Housing and Urban Development, from the beginning of the recession in 2007 through 2010, family homelessness has increased by 20%, and the U.S. Department of Education reported that over a million schoolchildren were homeless in the 2011 to 2012 school year—close to a 75% increase since 2007. At the same time, there have
been increasing reports of homeless encampments emerging in communities across the country, primarily in urban and suburban areas and spanning states as diverse as Hawaii, Alaska, California, and Connecticut. Our media survey of news reports from 2008 to July 2013 documents over 100 tent communities in 46 of 50 states and the District of Columbia.

The U.S economy has been able to adapt and even thrive with fewer workers overall. To quote Donald Luskin of Trend Macro, “…a workforce reduced by 5 million, US GDP on a real inflation adjusted basis is far higher than pre-pandemic levels.”

Indeed, despite 1 million Covid deaths in the US and another 1.2 million debilitated as of 2022, metrics such as GDP, corporate profits, and consumer spending have recovered and made new highs: As if the Great Recession was not bad enough, the Covid pandemic has seen the labor force shrink even more, and is at multi-decade lows. Men have been hit especially hard. The male labor force participation fell from as high as 87% in 1950 to just 67% today: From Bloomberg, Five Million Men Are Still Missing From the U.S. Workforce :

…employment among Americans in their prime working years, usually defined as age 25 through 54, is edging close to where it was before the pandemic. But for prime-age men—an estimated 86.1% of whom had jobs in March, according to the U.S. Bureau of Labor Statistics, vs. 86.5% in February 2020—that’s still quite low by historical standards. In the 1950s and ’60s, the prime-age male employment rate averaged 93.8%. If it were that high today, 4.9 million more men would have jobs.

Also, disability claims have surged too, 10 million as of Dec. 2016. Why wait for Social Security when you can find a doctor to write you up a claim now:

This far exceeds the rate of population growth. Perhaps some of this this is attributable to aging of the population, but this surge in claims since 1995 tracks the loss of manufacturing jobs and the rise of the opioid epidemic in the Midwest.

Some thoughts on the above trends:

The US economy has adapted to make do with less. The reason why the surge in Covid cases, deaths, and disability claims has not hurt the economy, such as consumer spending and corporate profits, is that the upper-middle class and wealthy contribute disproportionately to economic growth and consumption overall.

The Pareto Principle holds in economics as it does in business. According to the Washington Post, “…nearly 40 percent of overall consumer spending comes from the top fifth of earners — households that earn at least $120,000 a year.” Covid tended to disproportionately affect the old, the infirm, or those with low incomes or unemployed, so the impact to the US economy was not that bad. It’s people with large incomes or retirement savings who are buying pricey Disneyland tickets, home renovations, large SUVs, or Superbowl tickets, not the tens of millions of Americans who are on the margins, on disability, or are just scraping by.

Same for the rise of the luxury foreign consumer, such as in China. Disney and Nike derive an increasingly large share of earnings from overseas.

Much of the US economy bypasses the consumer altogether, such as business to business. For example, Google and Facebook selling ad space to cloud storage providers, insurance, or credit card companies. Cloud storage, webhosting, mobile advertising, mobile apps, etc. are all booming industries which require fewer workers relative to manufacturing, agriculture, or retail, and are not marketed directly to consumers but rather to other businesses.

The sad and unavoidable reality also is that the opioid epidemic, the ‘disability claims epidemic,’ or the ‘male worker shortage’ is in large part a low IQ epidemic. Society has less use for males who have IQs between 90-105 or so, who cannot cut it in STEM, and who are finding it hard to cope with increasingly competitive economic conditions and higher overall costs like rent, and is why many men are delaying family formation or moving back with parents (but also due to careerism for women).

And it’s not just limited to young people either, many boomers and gen-x fill the ranks of the jobless, poor, or homeless. The so-called ‘teen Summer job’ is hardly limited to teens or the Summer: one not uncommonly sees people in their 50s or 60s doing low-skilled service sector work. There is an overly optimistic assumption by policy makers and economists that low-skilled workers are supposed to ‘graduate’ to better jobs, but for all too many people it’s the final destination. Despite that indebted millennials, gen-z, and student loans dominate headlines, according to data from the Insured Retirement Institute in 2019, about 45% of baby boomers surveyed had no savings.

A lot of young people have rationalized that playing video games while living with friends or parents is a better value proposition than slave wages and demanding hours, or having to deal with political correctness at the office, diversity training, HR, or other inconveniences. Many low-skilled young and middle-aged men are more content with an easy retail job or just living with parents or with friends or with a girlfriend than going down the family formation route even if there is generous federal and state aid for families (way more than aid for individuals, which is comparably paltry).

And it’s not like employers are helping in the matter either for those who want to work. The barriers of entry to work keep rising, such as automated resume screening, tons of interviews and screening, credentialism, drug tests, background tests, etc. Rather then showing up to work on the first day, you apply online for the possibly of maybe getting a callback and then going through a gauntlet of screening in the small hope of finally getting a job that will pay a lower-middle class wage. The growing population of ex-felons and drug users means that the quality of workers has probably declined, necessitating more screening and also lowering overall social trust, which imposes a cost on everyone. Also, the threat of civil litigation and the difficulty of terminating workers. It’s also asymmetric: low-quality employees subtract more value than value created by high-quality employees.

This cheap, low-impact lifestyle is environmentally more sustainable than aspiring to an expensive, consumer-driven lifestyle (shared living and playing video games has a smaller ‘footprint’ than building a new McMansion or raising a family). It’s weird sort of bifurcation in which either you work at FAANG and get rich early, or you play video games. Family formation has become too time consuming and expensive for many young people, and high-earning professionals want to build their resumes and nest eggs, not a family, which confers neither social status nor money.

There is no reason to expect any of these trends to slow or reverse. Tent cities, RVs/campers, and trailer parks are the only solutions it would seem to housing affordability and will become permanent fixtures of American society, much like the rise of the suburbs in the 1950s. The problem is that just building houses is not enough. You need jobs, accessibility, infrastructure, schools, and everything else that goes into making an area desirable, or at least livable, in the first place. Thousands of Californians already spend hours a day commuting from the exurbs to the cities, so, yes, cheap housing does exist even in blue areas, but it’s much more inconvenient. Wealthy consumers pulled ahead after Covid, just as they did in the aftermath of the 2008 crisis. But mental illness is probably the biggest factor in at least explaining opioid abuse and homelessness. I don’t see any reason for this to suddenly improve.

Going back to the topic of IQ, according to a viral 2017 lecture by Dr. Jordan Peterson, there are very few employment opportunities for individuals with IQs below 80 or so, which is 10-15% of the general adult US population:

A commonly cited study shows a threshold for low-skilled jobs to be an IQ of 80, and an IQ 85-95 for lower-middle-class jobs: 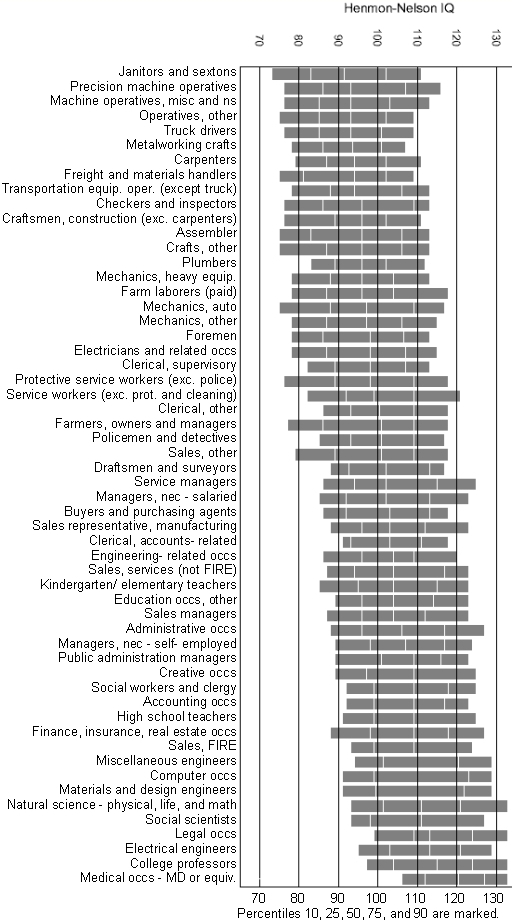 An IQ of 88-90 roughly corresponds to an AFQT score of 31, which is the cutoff for eligibility for enlisting in the Army or the Marines. Below this threshold, according to Dr. Peterson citing research from the DoD, there is no suitable task for such individuals such that their low intelligence is not too much of a hindrance, so this means up to a fifth of Americans are not smart enough to enlist.

Thus, 30-40 million Americans, who have IQs below 80-85, are either unemployable or barely contributing if employed. They don’t contribute much to consumer spending either, being that they tend to earn so little money. Covid tended to disproportionately affect these people, either by living in densely populated subsidized or group housing, and or by working in occupations that made them especially susceptible to contracting Covid.

I don’t think policy makers, on either side of the aisle, grasp or understand the extent of the situation. Many millions of people’s lives are blighted beyond any hope or repair. These are people who got off on the wrong foot decades ago, and are now so far off the trail, if not having already veered off the cliff. Or, in invoking Paige Harden’s The Genetic Lottery, were delt a bad hand of cards genetically. We’re not talking about something that can be fixed with ‘more education,’ ‘skills training,’ or ‘more welfare’. Because genes play a large role, whether it’s IQ or susceptibility to mental illness or addiction, means that social programs will be of limited efficiency. And as discussed above, skills training or education does not work for the 10-15% of the population who are not smart enough to benefit much anyway. Even if drugs were banned, the damage is already done to these people, and it’s not possible to raise IQ [0] . Even successful families in which there every possible environmental advantage, have some mental illness or other problems, suggesting a strong genetic contributor. And multiply by thousands of families over many generations, and it adds up to a lot of people who are not contributing.

In summary, The Atlantic a month ago published an article about the ‘normalization’ of Covid deaths in the US: how did so many deaths become like background noise, unlike 911, in which each death seemed to matter more, or we why 911 seemed to demand much more urgency. The difference between Covid and 911, is that 911 was an attack on America’s financial center, the World Trade Center, at the heart of finance, New York City. By comparison, as discussed above, Covid tended to affect those whose contributions tended to be much smaller or not as obvious.

[0] As Dr. Peterson has repeatedly said, nothing has consistently been shown to work at raising general intelligence. At best, training boosts performance at the specific skill being trained for, but this does not translate into a sort of meta-skill, or intelligence, that transfers to unrelated skills.