The past two months have been especially tough.

Does the recent selloff in the markets invalidate my forecasting abilities? I don’t think so. First, Bitcoin is still much weaker than the S&P 500 and Nasdaq, as I said would happen. Since late 2020, Bitcoin has lagged large cap tech and the S&P500, and the gap continues to widen as Bitcoin has now broken below $30,000. Yes, 3x tech ETFs will continue to beat Bitcoin. Also, there are still 7 full months in 2022 for the stock market to recover, which it will either this year or next year (not that it matters that much). Just because it fell more than I expected in early 2022 doesn’t mean I will be wrong long-term or that my thesis was wrong. I was only wrong for half a year, which is not bad considering I have been right for over a decade otherwise.

Bitcoin continues to lag the stock market. 3x tech ETFs (TECL and TQQQ) have gained 18% but Bitcoin keeps falling, like I would would happen. 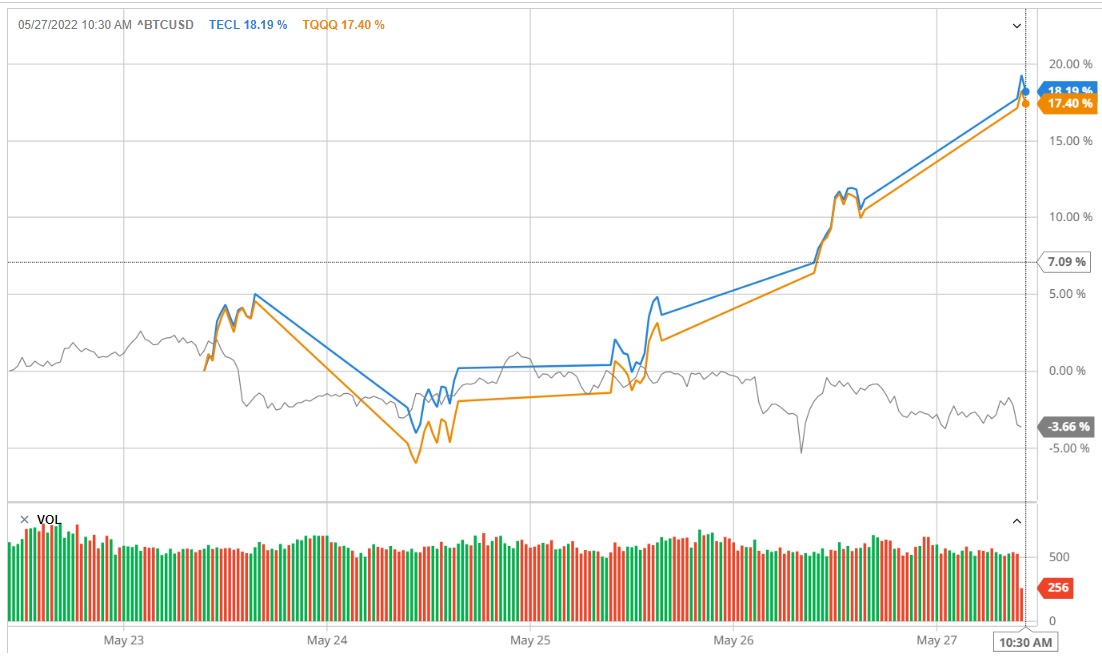 As shown above, BTC, in grey, lost 4% over the past week, but TECL and TQQ gained 18%. Bitcoin has also lagged Tesla significantly, which I also own.

Only a single stock I have recommended has done markedly poorly, that being Palantir.

Also, afik , no one except Peter Schiff and maybe a few others correctly predicted the sudden inflation in 2022 or the market crash, but given he has been wrong about everything else, means, relatively speaking, I am still one of the best forecasters alive. Just because you have been wrong for the past decade only to accidently be right for the past 6 months, doesn’t mean you’re a good forecaster. It just means you were lucky.

Three months later, I was also right about the Ukraine invasion being a dud, correctly predicting that Putin would not do much and there would be no escalation.

The overrated financial media is already predicting crisis again. Likely they will be wrong, just like they were wrong about Ukraine. These sort of headlines almost always mark the bottom and the resumption of the bull market.

There is no reason to expect big tech companies will suddenly stop generating huge profits. Tech salaries for top tech companies are not going to fall either. Nor will valuations for private companies like Stripe. All of the factors that were in place in 2020, 2015, and 2010 are still fully intact now: intellectual property and networking moats, scalability, consumer and b2b demand, mobile ad growth, etc. I took advantage of this dip to add to the 3x tech ETFs at a 60-70% discount. It sucks seeing it fall so much so suddenly, but in 2020 during COvid it did the same thing and came roaring back.