I’m kinda burned out on Ukraine, time for a topic that is completely different.

I want to describe a common mistake in reasoning, which I will call the “ignoring the middle” fallacy (not to be confused with the false dilemma). All too often, people focus on the endpoints when making decisions and ignore all the stuff the goes on in-between, for a process in which there is some continuous accrual of gains (e.g., income, wages, stock market gains, real estate gains).

Consider the so-called parable of the turkey, in which a turkey is happily fed and gains weight everyday, oblivious to the fate that awaits it on Thanksgiving: 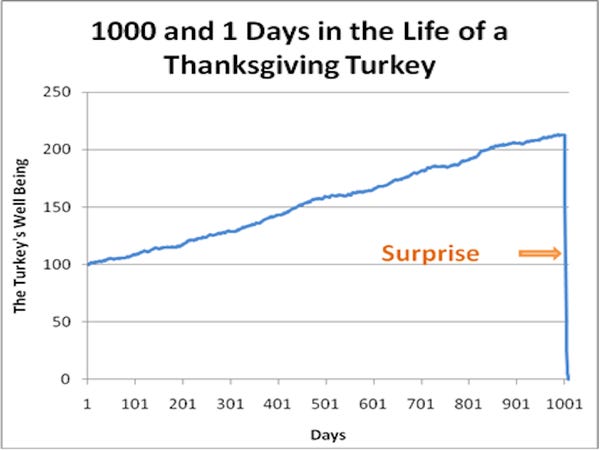 The endpoint event, that being Thanksgiving, erases all the earlier gains, that being weight. In mathematical parlance, this is called an absorbing barrier. The fallacy is believing that processes which stop must necessarily undo all earlier gains, hence ignoring the middle.

I will try to illustrate this with some examples.

Reflecting on the 1-year anniversary of his Substack newsletter, Freddie DeBoer writes:

Now I find myself firmly in the upper-middle-class. I know that I’ve worked hard and earned it, but I also know how lucky I am, and I am keenly aware that it can all go away at any time. But I intend to make the most of it while I am so fortunate, and I can tell you that I sincerely and deeply appreciate the contribution of every single subscriber. You have my thanks.

[The oft-predicted unsustainability of the ‘Substack model’ has never made sense to me. Why would people paying for something that creates value and they derive enjoyment from, be unsustainable? How is supporting a Substack creator any less sustainable than any other service, such as supporting an author by buying his books or paying for an online NYTs subscription. Most of the people who subscribe to Freddie’s Substack (or Jordan Peterson back when he was on Patreon) do so as a gesture of support for the creator and the values he or she represents, not necessarily conditional on the unfailing production of new content. That’s why people collectively donate millions to politicians, fully expecting nothing definitive in return, but just to show support for the politician and the said values he or she represents.]

In the above quote, Freddie is ignoring the middle by only focusing on the endpoint (losing his subscribers). The ‘middle’ are all the earnings he accumulated, starting from when he began until, I guess, he quits. Losing all his subscribers doesn’t mean he forfeits his accrued earnings (unless he is really bad at managing money, but that is a separate problem). So it’s not ‘all or nothing’, but more like a ramp in which earnings steadily accrue until stopping. The second derivative goes negative, but the slope is always positive or flat (or more technically, monotonically increasing).

Another example is comparing the income of a taxi driver to a banker:

Taleb spins an anecdote about two brothers, one who becomes a taxi driver and deals with variable income — when he has a week without a ride, he innovates by looking for a more active spot.

The other is a banker, who enjoys a comfortable office and a fixed, steady income. Everything is going fine… until the GFC hits. The banker is fired while the taxi driver survives (until Uber comes along).

Yes, the banker is dependent on a steady paycheck, but also makes considerably more money than the cab driver (also why would the cabbie not be dependent on income either). Even if the cabbie has a much longer career, the banker may still earn more despite having a much shorter career or being fired due to a recession. Like above, this is because the banker is able to keep his accrued earnings, so he still comes out way ahead even if his career is shorter. Also, the banker can invest his windfall in the stock market or real estate and make even more money even if he is not working. So if an investment banker earns $2 million, just a 2.5% annual return is probably equal to the salary of the cab driver.

This is why I’m not so quick to dismiss short-term strategies, such as on r/wallstreetbets. If someone can turn $1,000 into $50,000 in a week with option trading (such as buying out-of-money puts on Russian stocks and ETFs before Putin invaded Ukraine), that’s equal to a century’s worth of returns from investing that same $1,000 in the S&P 500. The short term strategy is risker and much briefer, but when repeated many times, the accumulated returns are far superior to the slower strategy [of course, this assumes that your strategy has an edge].

OnlyFans is criticized as being exploitative, but many performers/creators are earning far more money than they would with a regular job. Sure, a ‘career’ on OnlyFans is short, but like the banker, the pay is so much greater that perhaps it’s still worthwhile anyway. ‘Short-termism’ is not so bad, after all, if you can keep those large, short-term profits.

Or similarly, predictions of tech bubble or that current tech trends (such as apps, social networking, mobile advertising, etc.) are unsustainable. If you are earning hundreds of thousands of dollars or even millions of dollars in annual income in those industries, who cares if or when the cycle peaks; that is still $ in the bank as far as you’re concerned, for every day that you are getting paid.

This also applies to predictions of bubble/crisis as it pertains to the stock market and the real estate market. Since 2012 or so, there have been endless predictions by experts and pundits of an impending real estate or stock market crisis, or that valuations are too high, or that housing is a bubble, unsustainable, etc. On investing forums, there are constant warnings about an impending crash, maybe due to Russia, Covid, or whatever is supposed to be the latest crisis. But what is ignored or overlooked is that markets tend to rise when they are not crashing. Crashes are rare, but otherwise stocks tend to rise. Only focusing on crashes means ignoring the middle, in between crashes, when prices are going up.

If you sold your stocks in 2016 after Trump won over concerns he would be bad for the economy or start a world war (at the time, these were not unreasonable concerns), you would have had to wait three years, assuming you timed the exact the bottom of the Covid crash in March 2020, to finally get back in at the very price you sold (and you would have missed out on all the dividends): 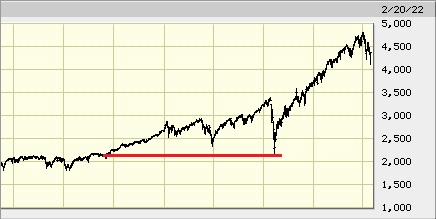 If your timing was bad enough to have sold in November 2016, before a 50% rally, what would make you think you would be able to time the bottom of the Covid crash? Likely, you would miss out on that too.

This is because in between when Trump won and Covid began, the S&P 500 gained 50%+ in those three brief years. That shows the power of the middle, and also the futility of market timing. If you only look at the worst that can happen, you miss out on the potential gains that come in between.