They don’t. It’s just that successful ones go out of their way to tell everyone how successful they were in spite of having mediocre or low grades, and the media laps up such stories because it affirms a popular narrative/belief.

It’s like those stories that occasionally go viral about a janitor who dies and bequeaths a multi-million dollar fortune. It’s newsworthy, not because being a janitor is the secret to wealth, but for its rarity. It’s so uncommon for someone whose occupation pays so little to accumulate so much money, and when it happens it takes an extremely long time, an abundance of luck, and fastidious saving and investing. But lawyers, executives who donate multi-million dollar fortunes are not nearly as newsworthy, because it’s much more common.

The same for successful C-students. Purportedly self-made entrepreneurs like Gary Vaynerchuk (assuming inheriting your family’s wine busines counts as self-made), will go on about how they did poorly in school or are not that smart, but this is a textbook example of survivorship bias. What about all the Gary wannabees who also got poor grades but struck out (maybe because they did not have the luck of inheriting a family busines).

What matters more in the median (not the mean, because this may be skewed due to outliers), not the extremes. Sure, someone like Joe Rogan, who did not finish college, may be worth $100 million. Or James John Liautaud, the founder of the Jimmy Johns sandwich chain, who is worth $1 billion despite dropping out, but these are outliers. The median paints a much more realistic picture of the prospects of mediocre students, who do not attend college or fail to graduate (the data also shows that college dropouts do no better than high school grads, but still get all of the debt of having attended college): 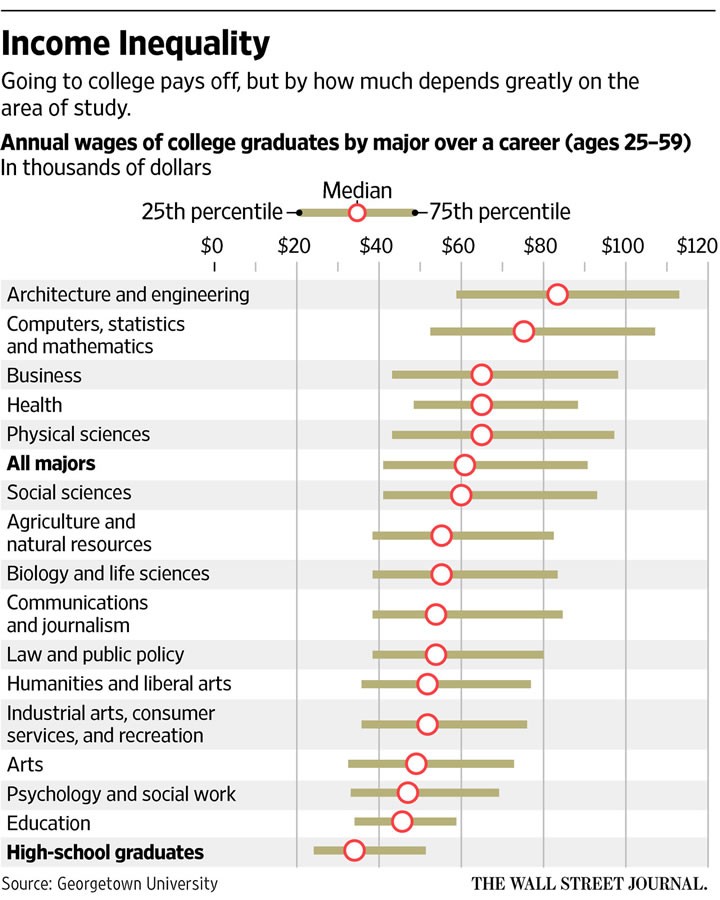 The difference is stark.

That is not to say C students cannot be successful, but as discussed in the article Normies, Status, and Substack, if they are wildly successful financially and or in terms of social status, it’s due to a combination of luck (like inheriting a family business), timing (being early), or connections (such as knowing the right agent who can land you a highly sought after acting role), not due to raw intellectual horsepower or merit like in STEM or finance. Seth Godin is very successful despite writing nothing but mediocre, pithy blog posts and books, because he was early and utilized his connections from his earlier jobs to help promote his work. Once you gain the necessary name reconnection from being early and having connections, you can coast along without having to be that talented. Same for podcasts, in which being early and getting ‘plugs’ in what has become a very saturated medium, helps greatly.

C students who finish college and make money tend to excel at things in which exactness, memorization, or accuracy is not a necessity, but rather more vague things in which success or skill is harder to quantify, such as ‘leadership’, ‘motivation’, or ‘management’. They are not the ones at the computer terminals trying to get it down to the very last detail. Professions such as programming, law, medicine, engineering, etc. are very details-orientated, and that’s why those jobs pay a lot, because few people are smart and or patient enough understand the necessary intricacies and subtleties.

A generation ago, the disparity between high achievers and C students was not as great, but the surge in lucrative FAANG jobs (as well as ‘big finance’) over the past decade, and the forever-widening college wage premium (which shows no sign of slowing and has only widened since Covid and the Great Recession), has given a major boost in terms of the median income and wealth (but also outliers) for brainy high achievers. 50 years ago, to be a multi-millionaire at 30 you either needed to be in the entertainment industry or a star athlete, but many young people working at start-ups, at major tech companies, or on Wall St., are becoming much wealthier than even the young wealthy of generations ago (even after adjusting for inflation). Instead of having to be an elite-level baseball player to get rich, you can just be a decent coder and still make a very good living, whereas a merely being decent baseball player can maybe get you a coaching job or spot in the minor leagues, which pays worse than being a decent coder.

They [C students] are not going to be writing viral 3000+ word Substack or Medium posts, are not going to suddenly develop a Substack online following by critiquing the moral inconsistencies or blind spots of society or the ‘ruling class’. Nor are they going to be retiring at the age of 35 with millions in savings from a lucrative tech job, as commonly seen on ‘FIRE’ communities/subs. Financial success, if it comes, will be slow and tangible, like doing things, not handling abstractions, and without the prominence that comes from having viral success.