A month ago as Bitcoin was crossing $65,000, I saw a major uptick of discussion on FIRE/investing communities about crypto. I think some people were hoping to actually retire off Bitcoin or Ethereum. I was saying to myself, “ain’t gonna happen.”

Sure enough, Bitcoin has since fallen 35% in a month, and has done nothing for almost all of 2021. This is despite a strong S&P 500 and Nasdaq and high inflation.

Of course, one can point to the long-term chart of Bitcoin as evidence to ignore such selling. But the tendency of Bitcoin and other coins to fall quickly and not hold gains anymore, has made them worse investments compared to leveraged ETFs.

Since early 2018, (three years, which is a pretty long time), Bitcoin has lagged TECL and TQQ considerably, and the gap has only widened since December: 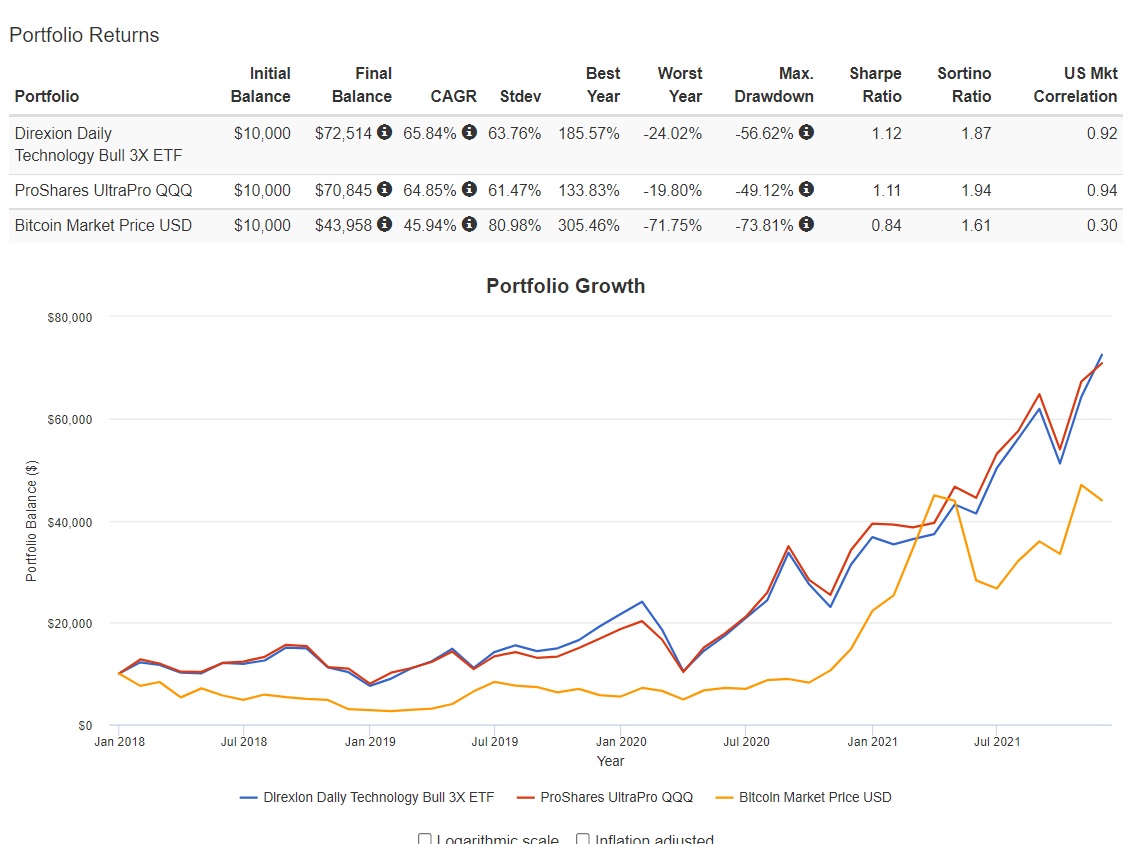 If that does not sufficiently convey how bad Bitcoin has been, an ETF which tracks Bitcoin, BITO, is down 31% since its debut in late October, versus 3.8% gains for the S&P 500: 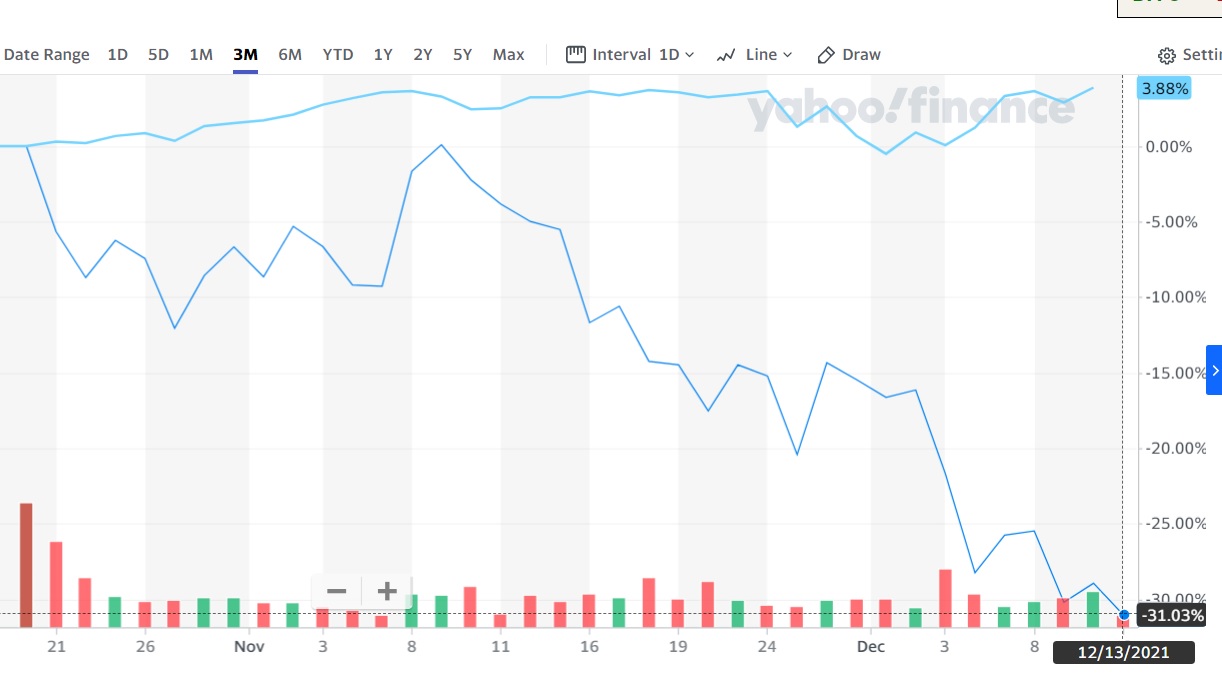 It’s hard to sugarcoat this. It’s evident all the hype over the past year, whether about hyperinflation, scarcity, El Salvador, etc. was for nothing. By the time a narrative is already well-established it’s already too late and there is no one left to buy, so the only direction is lower. Bitcoin’s price is purely a function of supply and demand, not recurring cash flows or other metrics that provide at least a floor or intrinsic value.

Crypto investors get mad when you show them the above charts. Despite being the most over-hyped asset probably ever, Bitcoin’s performance lags simple index funds (albeit, leveraged versions of them). So for the same amount of volatility, Bitcoin’s performance is much worse than 3x ETFs. I dunno why people would get mad about this…I am showing an actual way to get rich quick that is far superior to crypto, that anyone can replicate. A lot of people got duped by the usual sales pitches about how inflation would make Bitcoin go to $100k or whatever, or someone like Michael Saylor promising Bitcoin would go to $10 million (or some other implausible target). Better to cut losses now and put your money in something that actually goes up, than hoping for a comeback that may never come.

What do you think is a better hedge against inflation: the Nasdaq, which has gone up in a strait line since 2009, or Bitcoin, which recently lost 30% of its value against a backdrop of both high inflation and a strong stock market (true, Bitcoin has more gains overall, but much of those gains are from pre-2018).

If TECL and TQQQ go up 70%/year, which based on past performance is doable, compounded for 4.5 years turns $100k into $1 million. That is enough to retire off of based on FIRE standards. Then you can just park it in safe 1x ETFs. That is what I have been doing.

I ran some numbers. For example, if you start with $100k and add $20k/year, with a 70% annual return with TECL or TQQQ (which based on past performance is easily doable), at the end of four years you will have over $1 million. On many “FIRE” subs, having $1 million is considered a success and is a sought after goal. 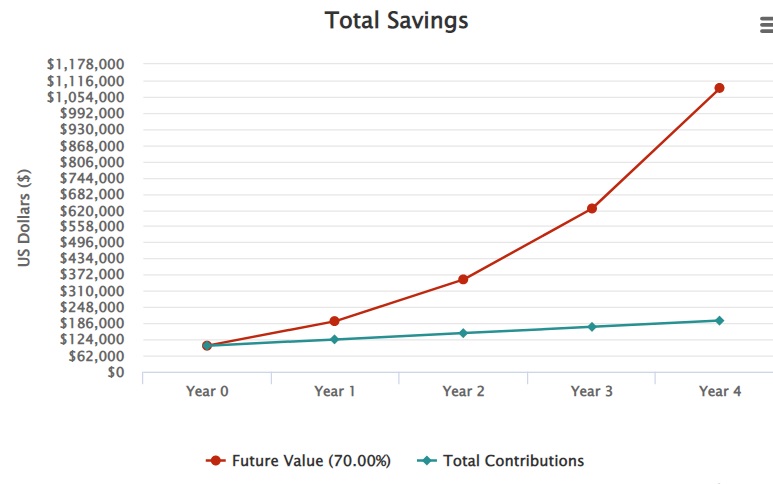 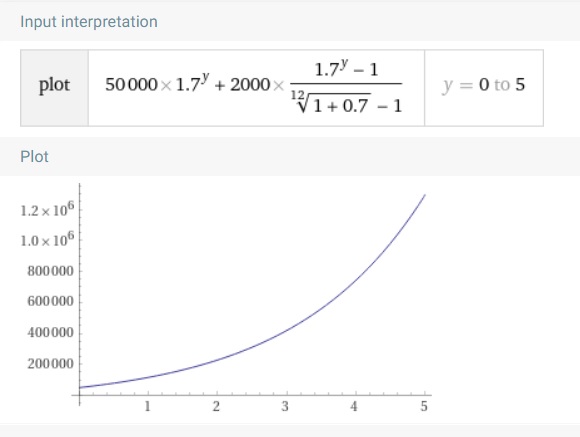 [I derived the above formula for compounding with monthly contributions, because I was unable to find any online. You would think this would be easy to find, but it’s not and I had to derive it myself.]

This assumes past performance continues, but investing Bitcoin is also premised on the assumption that the past will repeat.

Smaller coins can go up even more, but there are hundreds of small cryptos to choose from, so the odds of getting it right are low. For every SHIB there are many that do not do even 1/100 as well. I remember how everyone was so excited about LINK in 2019-2020 yet it completely missed out on the 2021 rally. Same for YFI and many others.

If the goal is to make money and retire, crypto is falling way short of that objective. Unless you bought before 2013-2015 or so, or unless you get lucky, no one is going to retire off this, I guarantee it. There is not enough money in the world for Bitcoin to even meet its most conservative price forecasts [and if there were enough money, it would probably be worthless anyway]. At some point, the number of new buyers must dry up, leaving only sellers; that point has probably already come.

Some say you cannot get rich quick, or that it requires enormous risk-taking or luck. This is wrong. You can get rich fairly quickly if you avoid the the pitfalls such as Bitcoin. Turning $50,000-$100,000 into $1 million with 3x ETFs in 4-5 years is pretty close to getting rich quick. No luck either, since all you’re doing is buying ETFs composed of some of the biggest, most profitable, most visible companies the world. You are not trying to find a diamond in the rough, which almost never works well due to the high probability of failure, but rather just picking up free money. What speculators get wrong is the whole speculation part. It is way easier to make money investing in what already works, and then adding some leverage to it, than trying to find The Next Big Thing.