I think way too much money is spent on programs of dubious efficacy or are just useless. But this does not mean we have to tolerate wrong/bad arguments against such spending either. A recent poll showed that 65% of Americans, presumably including many conservatives, support unconditional government remittances of $2,000/month. A common response is that such Americans are either acting against their interests or are ignorant of economics, because such spending will incur a so-called ‘inflation tax’, negating the $2,000, or something like that.

Just running some numbers shows how unsound this argument is. Such spending would only be a tax if someone’s increase in inflation costs exceeds the $2k or $24k (if looking at annual numbers). So if the $2k/month makes the CPI go up 1%, then someone would have to spend $2.4 million/year to have a net loss, assuming no attendant increase of wages, asset prices, etc. Someone who spends a lot of money would see a net loss, but not someone who earns and spends little. As for investors, it does not matter anyway, as the S&P 500 does well in both high and low inflation environments.

It’s hard to come up with plausible numbers in which such spending acts as a tax. Even if it made the CPI rise 5%, someone would have to spend $480,000/year for the inflation to act as a tax. We’re talking half a million in spending, not income–a $500k/year income is already in the top 1% territory. This also assumes wages and asset prices do not go up, so you would have this situation in which a UBI-like program causes a spike in inflation but somehow wages and asset prices do not rise, which would be very unusual–the last time that assets had a negative real return during high inflation was the 70s, so in theory it could happen again, but I think it would be very unlikely.

For it to be a tax requires contrived situations that would probably not apply to the vast majority of Americans. For example, someone who is awarded a $1 million lump sum (such as an injury claim) and then CPI surges 5%, would see a ‘loss’ of about $26,000 (minus $50,000 for inflation plus $24,000 for the stimulus).

Someone who in invested stocks and real estate would almost certainty come out ahead–the opposite of a tax. In 2021, despite high inflation, due to surging stock and real estate prices and high wages, many Americans have actually gotten wealthier relative to the rest of the world and on an inflation-adjusted basis. In Venezuela or Turkey, it is the opposite situation of people getting poorer and poorer as their local currencies plunge against the dollar all while inflation surges. This shows the power of having world reserve currency status and the dollar being the ‘global unit’ of wealth.

But despite high inflation, the dollar has continued to gain against the Euro, Pound, and other currencies, proving that Peter Schiff is always wrong no matter what, high inflation or not: 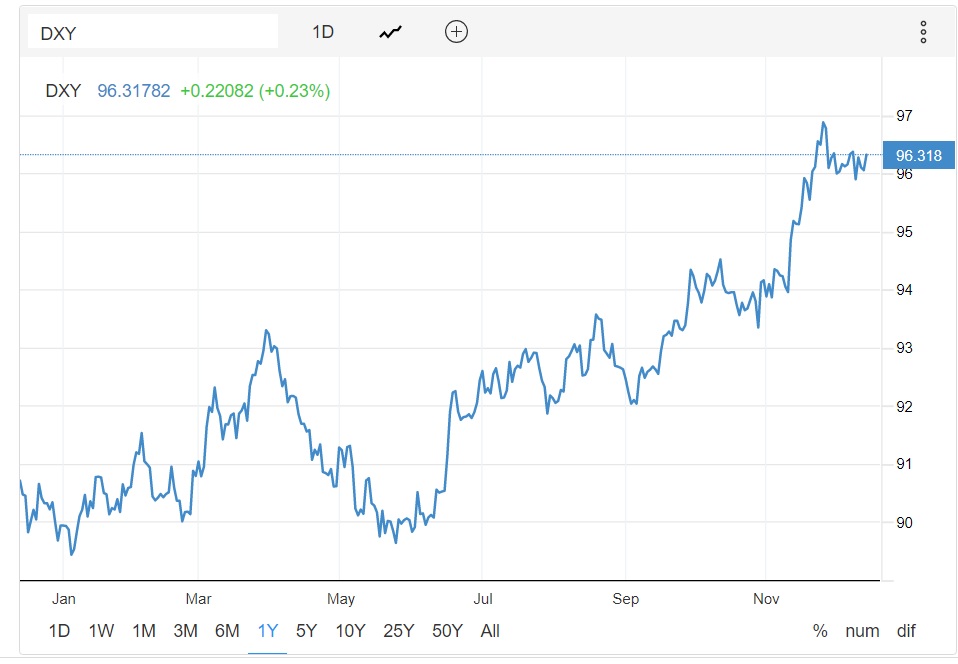 Unless you have a huge family or are an Olympic swimmer, people are generally not spending much money on food even after factoring in recent inflation. The average American household spend $7,000/year on food, so a 10% increase due to inflation is $700, or about $2/day, which is pretty insignificant. If someone has $100,000 in investible assets and those increase even just 2-3%, that is enough to offset much of the inflation, ignoring any increase in wages too. Healthcare inflation is a much bigger deal and long predates Covid. A single serious illness is easily equal to many year’s worth of food-based inflation.

I personally have noticed that certain food items have gotten more expensive over the past year, but it still does not seem like a crisis that the media would have you believe. Interestingly, despite shrinkflation and higher food prices, the obesity problem keeps getting worse, suggesting that even major macro factors cannot override people’s biological urges. I think overeating has become a way for people to kill the monotony of having such an abundance of free time given that Covid has created much permanent job loss for so many people or shortened hours.

To bring this back to inflation, the link between government spending and inflation is tenuous. Federal spending surged for 20 years under Bush, Obama, and Trump, but inflation only spiked in 2021. Interest paid on debt relative to GDP has not increased either. Part of the reason why unconditional remittances may not be that inflationary is because the money tends to be saved or used to pay down personal debts, as was the case with the Covid stimulus checks, which totaled $3,200 over three payments.

But what if the debt becomes unsustainable? Because of reserve currency status, if the the debt burden becomes ‘too big’ that it also somehow threatens the U.S. economy, such fears would be deflationary, causing bond yields to fall, ironically making it easier to service said debt. In emerging markets, it’s the opposite situation compared to the U.S., of loss of economic confidence causing debt to become more expensive to service, not cheaper. To pull itself out of such a hypothetical situation, likely the treasury would issue long-dated bonds at low yields to pay off short-term debt, and then stop issuing as much debt overall, and the fed would likely try to engage in a type of QE to push long-term bond yields lower.