Are the health effects of obesity exaggerated? possibly

I think much of what is considered ‘scientific truth/orthodoxy’ needs to be scrutinized better. The replication crisis for example has called into doubt many assumptions that were in the past taken for granted. As it turns out, things that should be self-evident or intuitively ‘obvious’ fail to replicate, such as social priming research. Daniel Kahneman, Nobel Prize winner and author of the best-seller Thinking Fast and Slow in 2017 admitted that he “placed too much faith in under-powered studies.”

There is little reason to expect health research to be any more impervious to scrutiny and the replication crisis than behavioral psychology. The ever-changing media narratives about masks, vaccine effectiveness, the origins of Covid, etc. show the difficulty of making this sort of stuff rigorous and definitive in spite of deferring to science. At best, science seems to produce hunches that possibly a hypothesis is true based on the correlation between some variables, but this hardly sufficient to prove causality.

A study may show that people who exercise daily live longer, but it’s not necessarily true that it’s the exercise that prolongs life expectancy, but perhaps people who exercise a lot have higher IQs, better health insurance coverage, higher incomes, or visit their doctor more frequently. In fairness, studies try to control for these factors.

Consider the picture below William Shatner, 90, who is demonstrably obese (he cannot even hide it under the suit), set a record as the oldest person to go into space. This should not be possible. He should be dead, yet evidently he’s healthy enough to be have been cleared by his doctors to go into space, and his reentry was success too, suffering no ill effects. Having a world-famous, beloved actor dying or having a heart attack on your live-streamed space launch cannot be good for PR purposes, so it’s reasonable to assume that he was put through a rigorous gauntlet of tests to be cleared for launch.

Unless you’re so overweight that you have to use a scooter to get around or find it hard to move, any loss of life expectancy attributable to moderate obesity is low, perhaps 2-4 years [1] for men and 2 years for women. People get mad when you tell them this, in part because they invested much of their egos in this belief that being fastidiously healthy will make them live much longer than their sedentary brethren, but only getting an extra 2-4 years in exchange for decades of sacrifice through exercise and diet, does seem like a poor deal and a letdown. Of course, one must also take into account quality of life, but William Shatner just went into space despite being obese, so evidently his quality is not suffering much.

One can also argue that Mr. Shatner is just an exception due to good genes. Perhaps, but he’s hardly alone. There are plenty of examples of obese or very overweight people who are or were fully-functional well into old age, some notable examples:

Henry Kissinger, still kicking at 98 despite being obese (or overweight; hard to tell because his posture is so poor); last surviving member of the Nixon cabinet. Pretty amazing.

Donald Trump, still fully functioning at 75 despite having an overweight BMI, little to no exercise, poor diet.

Warren Buffett, although only overweight according to BMI instead of obese, still fully functioning at 91 despite a poor diet and no exercise.

But what about increased risk of heart attack, stroke, cancer, diabetes, etc. Yes, that’s all accounted for by the 2-4 years. As it turns out, plenty of thin people get those conditions too. It’s not like thinness is a magic shield that protects against illness, hardly.

The Oxford University research found that moderate obesity, which is now common, reduces life expectancy by about 3 years, and that severe obesity, which is still uncommon, can shorten a person’s life by 10 years. This 10 year loss is equal to the effects of lifelong smoking.

The analysis brought together data from 57 long-term research studies mostly based in Europe or North America. People were followed for an average of 10 to 15 years, during which 100,000 died, making it the largest ever investigation of how obesity affects mortality. It was coordinated by the Clinical Trial Service Unit (CTSU) in Oxford and the results are published online today (18 March) in The Lancet.

I didn’t think it was so few years until I researched it, as I originally assumed that it would 10-15 years. It goes to show how you should always do you own research instead of blindly trusting media narratives or heeding the advice of overrated experts (such as overrated expert Michael Burry, who predicted that Tesla stock would fall; Tesla stock would go on to make new highs this week as I correctly predicted earlier this year it would).

A BMI of 40-45 is quite a lot. Someone with such a high BMI would appear very overweight all over, as opposed to just having some stomach fat. When people see the word ‘obesity’, what often comes to mind is having a huge, protruding gut, but it’s more like just carrying some extra weight which can be mostly concealed with lose-fitting clothes.

Yes, I do see the possible inconsistency of being skeptical of science but at the same time deferring to a scientific study to make my argument, but it’s all we have to work with.

Indeed, this corroborated by data which shows that U.S. life expectancy is at (or close) to record highs in spite of Americans also being fatter than ever (and this holds all over the world too, especially Australia, which is only slightly less obese than the U.S. but has longer life expectancy). 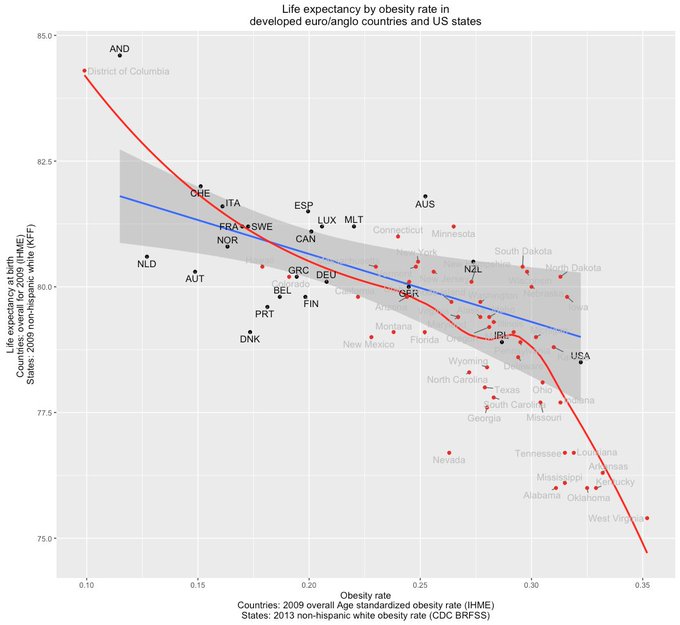 Moreover, the distribution fat and other factors are important. South Asians, Pakistanis, Indians, Filipinos, etc. tend to have high rates of heart disease despite being thin or only moderately overweight. This is in part because such individuals tend to be thin but carry a lot of central fat and visceral fat. Anglo-Whites however despite high rates obesity also tend to pack a lot of muscle, which offsets some of the deleterious effects of obesity (and also explains why Whites excel at football, rugby, ‘strong man’ competitions, mixed martial arts, shot put, weightlifting and other events in which strength and or size is a necessity).

In terms of killing people, adiposity does not seem to be that effective. However, obesity is possibly a drain on healthcare resources even if it does not reduce life expectancy much. But this cost is offset to some degree by higher insurance premiums (so although obese people need more treatment, they are paying more too), greater consumer spending (such as on food), and also less social security payouts (an affect also observed with smokers) by dying prematurely.