Some people turn to stand-up comedy for entertainment. For me, Tooleb’s twitter is my go-to source.

Academic careers have three stages.
1) The love phase: you want to devote your life to learning
2) The reputation phase: you discover the need to get established
3) The status phase: you are trapped into a hostile rank-obsessed rent seeking machine with an oppressive hierarchy

How about the stage in which your papers do not get published except in the lowest-ranked of journals.

Taleb is still holding a grudge against Dawkins for something he tweeted three years ago. To put it another way, this tweet is still festering in Taleb’s mind three years after it was tweeted.

Had Dawkins singled out a different religion, would Taleb have taken offense? Of course not.

Is there anyone who Taleb has not yet blocked?

I saw this going viral:

This is not a partisan issue.

This is not a women’s issue.

This is a babies, families, work and dignity issue.

The expectation of a parent at home with their own children is fundamental.

I dunno what world he is living in. It’s the exact opposite of this. There’s an obesity epidemic, especially among the poor. If anything, life has become too easy. There is considerable aid, welfare, scholarships and charity healthcare for poor families. When was the last time a child or young adult in the US was denied healthcare or education or some other fundamental service due to a lack of money? The 19th century? The govt. spends too much money on non-contributing people. It’s not because because the ‘poor’ cannot afford healthy food or gym memberships, which are cheaper than the latest iPhones, fast food, and cable plans anyway. Produce, beans, rice, lean chicken in bulk is considerably cheaper than a meal for four at McDonald’s. It’s not a poverty issue, but a laziness, poor choices one. 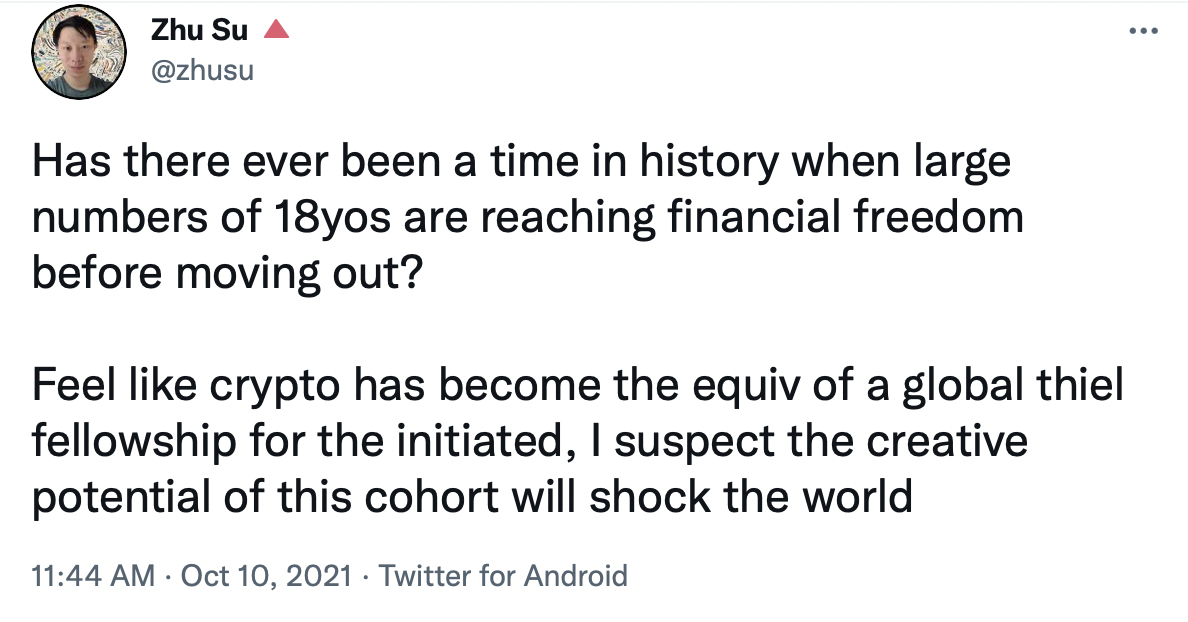 Don’t believe the hype. Hardly anyone is making life-changing money with crypto, or enough to retire by a long shot.

If 20-and 30-year-olds are getting rich, it ain’t with crypto that for sure. On crypto Reddit communities, it’s people with <$1,000 Binance accounts, vs. $100k+ Robinhood accounts on r/wallstreetbets. On FIRE subs, for every person who became millionaire with crypto, there are probably hundreds of others who did it with stocks, real estate, tech salaries, etc. (and not all old people either). Sure, crypto would have been faster, but the gains are not sustainable, and few individuals have gotten rich despite the hype. So to say that crypto is a path to financial independence for someone who buys today (as opposed to in 2013) is just ludicrously wrong. I posit that someone who invests in large cap tech (such as Tesla) will be much happier with their choice than someone who invests in crypto. Investing in Tesla (which will go to $4,000/share soon) is like investing in a company that will literately power the world and lay the global infrastructure in coming century, whereas Bitcoin is just a hobby that for some reason, defying rationality, became worth $1 trillion despite having close to no adoption or practical use.

Wait until she learns about Hollywood…no fan of Harris, but god these people are dumb.

Here is Tooleb again with a ‘probability tutorial,’ which amounts to just screenshots of formulas produced with Mathematica:

PROBABILITY TUTORIAL:
Explains why the Lognormal can mimic a Gamma distribution when the variance is low and the tails are thin.
In Medicine, where thin tails, the Gamma is better except when multivariate. pic.twitter.com/jaK2XRq5uQ


This guy is so smart..he knows how to generate formulas with software. whoaaa

“Explains why the Lognormal can mimic a Gamma distribution when the variance is low and the tails are thin. ”

Obviously…it can be shown via. the Stirling approximation that the behavior of the gamma distribution at the tails is the same as the log normal.

The crew of #NS18. pic.twitter.com/qKRAOY39TS

The Blue Origin space launch ft. William Shatner was a success, which agrees with my earlier prediction of the next ‘space race’ being led by billionaires, as such launches become increasingly common and major media spectacles.

NN Taleb's famous essay explains much about why a few mentally ill ex-men in frocks have a fighting chance to get America's most admired comedian, Dave Chappelle, cancelled:

"The Most Intolerant Wins: The Dictatorship of the Small Minority" by
@nntaleb https://t.co/761IKvpOFz

Not sure why Steve praises Taleb, the latter who equates IQ research with literal racism and cheered on Stefan Molyneux being de-platformed in 2020. Chappelle’s greatest crime is not making trans jokes, but that his material is not funny anymore. Anyway, that’s enough Twitter for this week. Over and out.