The bull market is long in the tooth. How long can it continue? Will future returns be poor?

From Josh Brown, This is why, he writes:

The S&P 500 has been compounding at 14% per year over the last ten years. That rate of return, which was not expected by anyone and should not be expected going forward, turns $100,000 into $370,000 if left alone. There have been people doing their best to talk you out of taking stock market risk, or convincing you that you could hedge it away while still earning the same (or better) returns. This is now and has always been a fantasy – risk-free reward is the domain of the charlatans. It only exists on Twitter, not in real life.

He says it is not expected going forward. But people said that 5 years ago, 10 years ago, etc. Maybe 15-25% annual returns are the new normal. I have long argued that people tend to overestimate the likelihood of change, either societally or economic; I take the opposite view, that trends, once established and and with justification behind them, tend to persist much longer than many assume or predict. The media narrative in mid-2020 was that vaccines would put an end to the Covid crisis, yet new variants keep popping up and cases in the US are rising again. So in spite of mass vaccination, the Covid crisis won’t go away, and probably never will, much like the threat of terrorism that 2 decades after 911 still necessitates we take off our shoes at the airport.

The main driver of surging stock prices since 2009 is reliable, scalable, recurring profits protected by intellectual property and network effects. It costs next to nothing for Facebook and Google to host ads. Millions of people everyday click such ads, often confusing the ads as part of the website on which the ads are hosted on (such Google Adsense publisher ads) or as links on a Facebook profile, adding up to billions of dollars of profits annually. Amazon connects buyers with 3rd-party sellers, taking a cut in the middle, as does Apple and its app store, taking a small cut from each app sale. Cloud hosting providers sell server space a large mark-up to firms. Microsoft can just keep selling the same facsimile of Windows and Office over and over, with small adjustments with each new iteration, at huge profit margins, which businesses willingly pay for.

Disney can keep making endless reboots and sequels of the same franchises, and earn billions more from licensing digital content, which costs nothing to distribute and store. The media narrative in Feb-May 2020 was that Covid would severely hurt Disney, but the always-wrong financial media overlooked that intellectual property and streaming entertainment are the main contributors of growth even if the theme parks were temporarily closed and losing money.

Profits matter more than even GDP. Multinationals, especially in tech,are generating record profits and cash flows. Interest rates rock bottom and not expected to go up anytime soon. These are optimal conditions for returns. The amount of cash generated by large firms is unprecedented in the history of the US economy and probably capitalism overall. It has been this way since 2009 and there is no reason to expect this to suddenly change, nor any signs that the conditions that were in place in 2009 have changed 12 years later.

Profit margins have been rising steadily for the past decade, only to swell even more so after Covid: 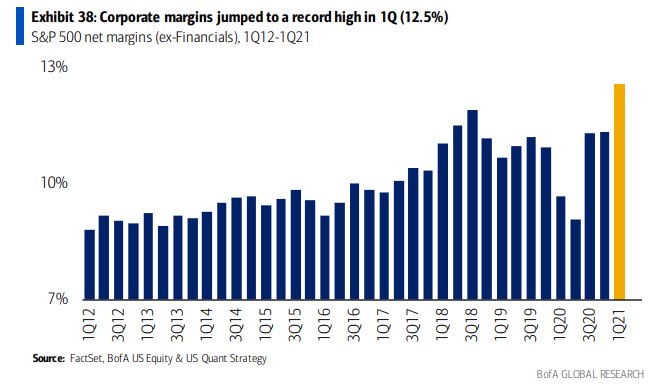 Zooming out, margins are the fattest ever, exceeding even the 90s:

The US economy entered recession in 2001 shortly after Clinton left office, and Bush was blamed for it (and this was before 911), but had Gore won there is little reason to expect things would have been different. By the late 90s there were many underlying problems such as high interest rates (6% vs. 0-.25% now) and shrinking profit margins as shown above, and other signs of stagnation. But no such problems exist now, hence my optimism going forward.

In the ’90s, Amazon, McDonald’s, Nike, Walmart, and Disney were successful, but were still just consumer brands, not major cultural and economic institutions in and of themselves, which is what they have become, especially since Covid.

Pre-2009/2008, ‘big tech’ was not a thing. Cisco, Oracle, IBM, and Microsoft were big and powerful, but nothing like we see now. The past decade saw the rise of 5 tech companies worth at least $1 trillion each, those being Apple, Amazon, Microsoft, Google, and Facebook. By comparison, Cisco and Microsoft in 2000, at the peak of the ’90s tech bubble were worth $1 trillion combined, yet valuations were considerably higher. 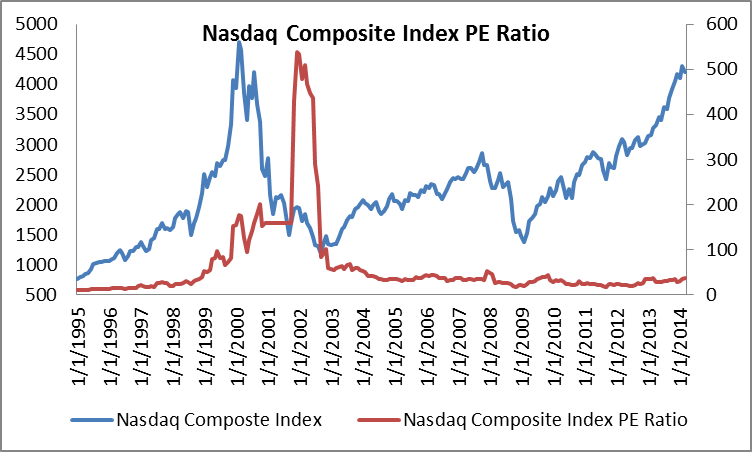 The PE ratio of the Nasdaq 100 is currently around 37, compared to 400+ in 2000. So to put it another way, given that the combined market capitalization of Nasdaq 100 companies is $19.4 trillion today versus $7 trillion in 2000 at the peak of the bubble, yet PE ratios are 90% lower, implies that companies are generating about 30x more profits. [But this includes new companies such as Facebook and Google, so it’s not like existing companies are earning 30x more money.] By comparison, US GDP only doubled in that same period, from $10 trillion to $20 trillion. This goes to show the huge disconnect between economic growth and corporate profits, especially in the tech sector.

As discussed in more detail here, the second tailwind for stocks is that yield curve is very steep and the CPI exceeds interest rates, as it has been since 2009 and even more so since Covid. Everyone is talking about surging inflation, yet the fed is obstinate about not raising rates until 2022-2023 at the earliest, and any rate hikes will be verrrryyy gradual and with tons of forewarning. This forces individuals and institutions to either buy stocks and other ‘risky’ assets [it’s not that stocks are that risky, but risk is defined as having the potential to lose significant value, unlike short-term government bonds], or lose 2-3%/year due to inflation. If the CPI lags the ‘true’ inflation rate, which most people seem to agree it does, then this only makes stocks more attractive as a hedge.