The Gwern article McNamara’s Folly: The Denial of Individual Differences has gone viral many times. I think however he overstates his case. I, probably like many others who read his review or similar articles about Project 100,000, such as on Unz.com or on Reddit, was under the mistaken impression that McNamara enlisted literal retards (or borderline retards) out of an act of misguided compassion, or that Project 100,000 was an abject failure that exploited the handicapped, but the evidence paints a somewhat more nuanced picture.

I think the examples he gives are cherry picking. He describes a particular ‘moron’, Freddie Hensley, who died:

To emphasize how visible they were, Gregory goes into detail about the one exception: the handsome young Freddie Hensley, who nevertheless was not the sharpest tool in the shed, to the surprise of everyone interacting with him and discovering things like his reflexes being far too slow to shoot a rifle or believing that thunder and lightning were unrelated; Hensley was sent into combat and died

So Project 100,000 recruits may have actually fared better than average.

The historynet.com link above says that Project 100,000 recruits died at a 3x higher rate compared to other GIs (the control group), but I was unable to corroborate this with the math. I think the worse-case calculation shows a 50% higher rate.

This doesn’t necessarily mean they were competent soldiers (the evidence suggests they were not), but they were not sacrificial lambs or cannon fodder as portrayed either.

Project 100,000 recruits were not just selected by IQ, but also included individuals who would have been rejected for other reasons, such as exceeding or failing to meet weight requirements, poor hearing or vision, or having ‘poor moral character’.

Project 100,000 recruits were not retarded or mentally handicapped. So one may see the word moron and be inclined to believe that Project 100,000 recruits were like Bill Murray in Stripes, but this is an exaggeration. During McNamara’s era, the term ‘moron’ was technically defined as someone with an IQ between 50-69. An ‘imbecile’ was defined as someone having an IQ between 20-49, and anyone below that was an ‘idiot’. Moron sounds worse than imbecile, but at the time it was not.

To enlist in the armed forces, an individual must score at least 10% on the AFQT battery, which is like an IQ test. Such scores are percentiles, so a score of 99, which is the highest possible score, implies scoring higher than 99% of test-takers. Category IV enlistees score between 10-30%. Anything below 10% is category V (by comparison, a score of 93-99% is category I), which since 1948 have never been recruited even during Project 100,000. These are the actual morons, not the IV recruits.

However during WW2 a different test was used, the AGCT. Astonishingly (or appallingly, depending on how you view it), 9% and 28% of WW2 recruits fell under categories V and IV respectively, versus 0% and 13% for Project 100,000. Only in 1948 did Congress make it illegal to induct category V enlistees. Thus, the US military has a long history of digging from the bottom of the barrel, so it’s not like what McNamara had done was unprecedented.

The above link also states that Project 100,000 recruits (New Standards men), although they took longer to train, they were not all failures, and were not an overall net-negative:

In combat, their record is less clear. Some performed poorly, some performed well. In a few instances, the failures of New Standards men probably cost their lives and the lives of other Marines. But New Standards Marines did not force leaders to alter their tactics, nor do they seem to have lowered the overall fighting power of Marine units.

Moreover, recruitment shortages forced the Marines to induct more IV enlistees, and even without Project 100,000, standards would have been lowered anyway.

Trying to convert AFQT categories/percentages into IQ scores is somewhat difficult, because the former tends to not work well for extremes of IQ. The AFQT is trying to test for competency for large numbers of people, so this means it’s designed with different objectives in mind and has different ‘norming’ than a conventional IQ test. However, I was able to find a conversion table from 1980 between AFQT and IQ scores: 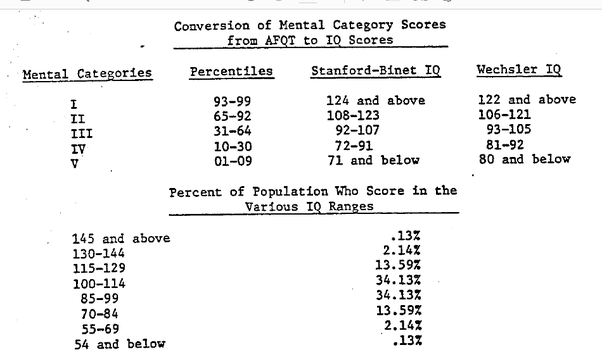 A correlation of around .8 between the AFQT and the Wechsler Adult Intelligence Test was ascertained, according to a 1974 Air Force Human Resources study.

The idea of Project 100,000 was to kill two birds with one stone by drafting recruits who were developmentally disabled, unhealthy, evil, or just too dumb to be conscripted previously: it would provide the warm bodies needed for Vietnam, and use the military to educate the least fortunate and give them a leg up as part of the Great Society’s faith in education to eliminate individual differences and refute the idea that intelligence is real.

According to the table above, category IV recruits have IQs between 72/81-91, which is higher than I would have otherwise guessed. An IQ of 90 is technically considered ‘average’ according to some classifications…a far cry from being developmentally disabled or a moron. And given that the rarity of low IQ falls exponentially as stipulated by the mathematics underlying the Bell Curve, a calculation shows most Project 100,000 recruits likely had IQs in the mid 80s, which is dull or slow but above handicapped, especially given that low ASVB scores were not the sole criterion for induction into Project 100,000, but as discussed above, included other attributes, such as flat feet or poor eyesight, that would have otherwise been disqualifying.

As the above Slate.com links shows, although category IV recruits take longer to train and are not as competent at marksmanship and other aspects of soldiering, are not entirely useless or incompetent. The rationale is that during shortages, low-quality troops is still better than not having any. Given that category IV enlistees are still used today, even at double-digit rates during the Iraq war according to the above link, suggests the DoD still has use for them, Project 100,000 not withstanding.

So why was Project 100,000 considered a failure? Because Project 100,000 recruits fared worse in civilian life, after war, compared to a control group of non-veterans. Project 100,000 was supposed to, in theory, serve as sort of launch pad to lift the disadvantaged out of poverty, in which it failed:

This should not be a surprise though. A study from 1987 showed that Vietnam veterans were more likely to be unemployed, overall, compared to non-veterans due to disability and poor education. So again, similar to war casualties, it’s not like Project 100,000 recruits were that much worse off than others. The inability of Project 100,000 recruits to thrive in civilian life, can probably be explained more by having low IQs than Project 100,000 failing. Yes, in failing to meet impossibly optimistic hopes of lifting the poor out of poverty, Project 100,000 failed, but IQ and unemployment rate and wages are negatively and positively correlated respectively anyway, so having a low IQ is will be an impediment regardless of veteran status.