If one listens to the media, one may be inclined to believe that China and the US are on the brink of war, much like the 50s and the ever-present threat of nuclear war by the Soviets, or that the US is falling behind China.

China will be a world power with immense military, diplomatic, and economic influence for the rest of my life and yours. We can do things, primarily economically, that can hopefully help improve the human rights of people in mainland China, Hong Kong, Tibet, Taiwan, and elsewhere in China’s sphere of influence.

Agree, and I also predict that there will not be any meaningful/substantive deterioration between US-China relations, besides the occasional exchange of words and threats unacted upon. But this does not mean that the US will cede influence to China.

But China dominating Hong Kong? There is literally nothing we can do to stop that; I know, because I can look at a map. (The United States dominates South America, and that’s a fucking continent.)

And also because that happened 23 years ago. Hong Kong was transferred to China on 1 July 1997, after 156 years of British rule.

America’s unipolar dominance is probably already dead, but if not it’s a terminal patient, and again there is nothing we can do to stop that. All of history tells us that unipolar power of the kind enjoyed by the United States the last several decades is simply not sustainable.

According to what history or whom? The Galactic Empire in the Foundation series lasted 12,000 years. Yes this is fiction, but there is no immutable law that says that empires must fall, that old powers must fall to new ones, that history must be cyclical.

The empirical evidence suggests the opposite, of US dominance rising. The US economy has grown in relative size compared to the rest of the world despite Covid. The US Covid recovery exceeded all other developed countries in speed ad magnitude, save for possibly Japan and China. Same for dominance of US firms:

Overall, the post-Soviet order is one in which the US has remain the superlative leader on the world stage, and I don’t see this changing for reasons described here and earlier posts.

Was the US pulling out of Afghanistan a defeat? Nominally, perhaps, but relative to the 30s, the US still has unrivaled relative power, and China is no Nazi Germany or U.S.S.R anyway. Even the mighty Roman Empire had some defeats, long before it actually collapsed. The Confederate Army had over 100 wins, such as the “First Battle of Saltville,” among many others. Such defeats were thus of no predictive value in the broader context of history. Also, it was not a military defeat but more of a tactical one. The era of of proxy wars is over too.

I empathically believe there will be no escalation of tensions between US, China, and Russia, but the just the same sort of muddying along that we have seen for the past 15 years or so.

If only there was some way to test this hypothesis. In spite of all the doom and gloom in 2018 about Trump tanking the US economy by starting a trade war with China, the stock market only dipped a little, only to surge in 2019 and again in 2020 and 2021. Despite predictions by ‘experts’ by economists and pundits of hyperinflation due to tariffs, inflation did not budge, only to start picking up again in 2021 during the Covid recovery, completely unrelated to China. There was no recession in 2019-2019 either, until Covid came along. Any ‘trade war’ was more of media-generated war than anything that posed a threat to either economy, as I correctly predicted. US imports from China did fall a little under Trump, but quickly rebounded during the pandemic: 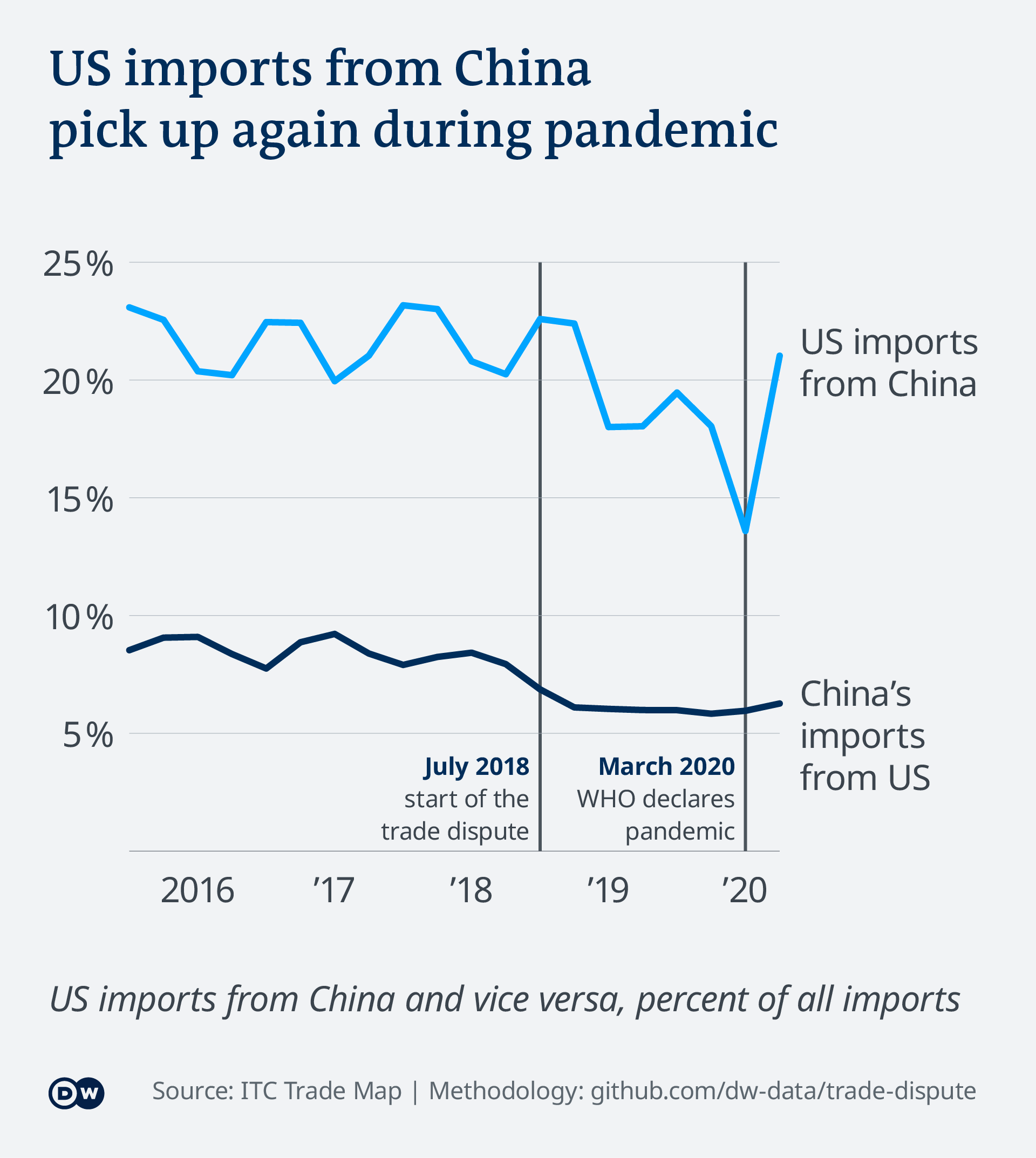 Contrary to the media myth/narrative of China-US codependency, only 20% of Chinese exports are to the US (and imports from China only accounted for 18% of overall US imports in 2019), which is lower than I would have guessed otherwise. In spite of US-China dominance, the world is huge, so there is plenty of trade outside of those nations.

Although there are stark differences in terms of traditions and government between the US and China, China for the past few decades has continued to borrow from and appropriate US consumer and entertainment culture (such as Chinese-versions of major US brands, such as Apple, Starbucks, and Disneyland,) which also makes me optimistic even if coverage and rhetoric by the media and politicians is overall overwhelmingly pessimistic. Typically, countries that mutually acrimonious do not seek to borrow from each others’ cultures.

In the 50s and 60s, nuclear war seemed ‘inevitable’…50+ years later, nothing has happened. Of course, this does not prove it cannot happen eventually, but it goes to show how things that seem to obvious or certain–whether it is the threat of nuclear war, or China-US economic and geopolitical crisis, or hyperinflation–tend to be the least probable even if it feels like the most possible.

But how many people predicted Covid? I don’t think anyone, yet that was much more of a Crisis than anything Trump or China did. I believe maybe only a handful of people predicted the 2008 crisis (it was so uncommon, a book and movie was made about one such individual). Or 911, which also no one saw coming. The Jan 6th Capitol protests, although not anywhere in the same league as the earlier example, also came as a surprise. If there is another crisis, it will likely be something unforeseen and not getting constant coverage by the media and pundits.