Entrepreneurship, of course, requires time devoted to imagining and dreaming—time today’s students simply don’t have. Many spend every minute trying to build a résumé that will usher them into the best colleges. In The Coddling of the American Mind, social psychologist Jonathan Haidt and former Foundation for Individual Rights in Education president Greg Lukianoff argue that, for the last two decades, parents have overscheduled their children to their detriment. To make sure college applications shine, they fill up kids’ time with supervised activities, eroding the hours they need to enjoy playing and simply being young. When you have school, then piano recital, then soccer practice, then choir, then homework, then bed, it’s tough to find time to go skateboarding with your friends. That isn’t a good thing.

With the exception of Web 2.0 and stuff like Uber (which is a pretty small niche), this is possibly one of the worst times ever for entrepreneurship. For multiple reasons:

Expenses are very high on an inflation adjusted basis, such as for rent, insurance, and advertising, all of which have exceeded inflation since the 80’s. Software and app companies require fewer employees and physical space than retail and scale more easily, which can explain the success of the former and why the ‘Retail apocalypse‘ is a thing.

Second, large companies benefit from low interest rates and cheap credit to expand very quickly, whereas small businesses have to borrow at much worse rates. What matters specifically is the differential between investment-grade debt interest rates vs. junk & consumer debt rates, which is very high. In 2009, for example, interest rates were close to zero yet credit card borrowing rates didn’t fall much. From 2009-2014, multinationals were able to borrow at just 2-3% a year, which is just slightly above Treasuries, but retail borrowers paid much higher rates (>10%). SBA Loans cost 7.25% to 10%.

Third, the college wage premium is higher now than ever, and more education is correlated with higher wages and lower unemployment. Due to the competitive job market, the less educated are at a disadvantage if they cannot hack it at entrepreneurship, because they will likely be earning very little and be competing with college grads for those same low-paying positions. This means there is no safety net should your venture fail.

As shown below, in spite of the burgeoning ‘anti-college movement’, the income gap between graduates and drop-outs is the widest it has ever been. These pundits such as James Altucher who are advocating not going to college could not have chosen a worse time: 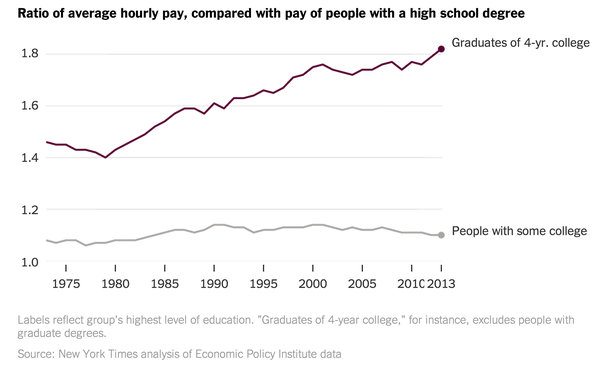 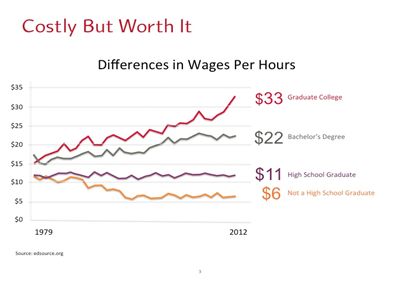 This is why despite being on the ‘right’, I don’t believe we’re in a college bubble and predictions of such are wrong or premature. I said this as early as 2014, and four years later it looks like I was correct again. I also wrote that the student loan bubble/crisis is overblown and that the media often cites outliers ($200k debt/student) as being representative of all students, when the actual debt is much less ($20-30k/student). As long as the college wage premium remains as wide as ever, there is no reason this bubble should pop.

Our national emphasis on college is not worth all the effort anyway. While some college programs provide a lot of value and push up the aggregate earnings of graduates, many are a waste of four years. Only 39 percent of managers say that students are ready for the workforce. More than half of liberal arts majors work in jobs that don’t require their degrees. As The Atlantic put it in 2016, “Is there really a Millennial underemployment crisis? Yes, but only among liberal-arts majors.”

Yeah, but having a better shot at being hired–even if, as Bryan Caplan argues, college is only good for ‘signaling value’ than actual learning–is still better than being unemployed and making less money. The problem is that too many low-IQ and unprepared students are being admitted and taking on debt, but for those who are smart and conscientious enough to get good grades and finish, college is still a good deal, and the alternatives aren’t that great. WordPress blogs, self-publishing books on Amazon, driving Uber, hosting podcasts, web design..etc. all that stuff is saturated, and maybe only couple people succeed for every thousand who try.

These are not complicated arguments and this is not a complicated subject, but similar to the debate over the minimum wage, there are a lot of conflicting opinions and no consensus on the matter, so such debates tend to go in circles after awhile.

The rise of the gig economy is attributable to the fact that the differential between what salaried workers earn, versus value created, is still too wide. This benefits college grads who can get good-paying jobs by exploiting this differential, but there is no guarantee this will continue. The 2008 crisis brought the first wave of lay-offs, giving employers an excuse to thin the herd, and even as profits rebounded quickly, many of the jobs lost (such as in the housing and financial sectors) did not return. A second crisis will be even worse for workers.