From The Atlantic, this article is going viral: Why Are Young People Having So Little Sex?

I dunno if it’s just me, but I’m tired of these ‘concern pieces’ by the NYTs, The Atlantic, Vox, and The New Yorker. “Young people are not doing enough XYZ,” whether it’s scolding young people for not buying homes, not getting married, not having sex, not buying cars, or for not consuming enough worthless crap, etc.

Here’s another example. Regarding the Kavanaugh confirmation, on October 5th, 2018, the very same publication, The Atlantic, published the article Why Men Sexually Harass Women. Gee, I wonder why men aren’t having as much sex.

This 12,000 word article hinges on the premise that there is a decline in young people having sex, and that this is an urgent matter, but also a recent development that demands an explanation. The author writes:

To the relief of many parents, educators, and clergy members who care about the health and well-being of young people, teens are launching their sex lives later. From 1991 to 2017, the Centers for Disease Control and Prevention’s Youth Risk Behavior Survey finds, the percentage of high-school students who’d had intercourse dropped from 54 to 40 percent. In other words, in the space of a generation, sex has gone from something most high-school students have experienced to something most haven’t. (And no, they aren’t having oral sex instead—that rate hasn’t changed much.)

Meanwhile, the U.S. teen pregnancy rate has plummeted to a third of its modern high. When this decline started, in the 1990s, it was widely and rightly embraced. But now some observers are beginning to wonder whether an unambiguously good thing might have roots in less salubrious developments. Signs are gathering that the delay in teen sex may have been the first indication of a broader withdrawal from physical intimacy that extends well into adulthood.

Over the past few years, Jean M. Twenge, a psychology professor at San Diego State University, has published research exploring how and why Americans’ sex lives may be ebbing. In a series of journal articles and in her latest book, iGen, she notes that today’s young adults are on track to have fewer sex partners than members of the two preceding generations. People now in their early 20s are two and a half times as likely to be abstinent as Gen Xers were at that age; 15 percent report having had no sex since they reached adulthood.

The problem is there is zero historical context for such data, so it’s impossible to know if this rise in celibacy is a secular or cyclical trend. A 27-year timeframe is insufficient to draw conclusions about sweeping societal changes. This entire article could just be a post-hoc rationalization of something that is just statistical noise.

Let’ assume the author is correct and that this decline represents a statistically significant development. As shown below, unmarried women are sexually active at the same rate now as in 1990, but there is a small uptick in inactivity for unmarried men: 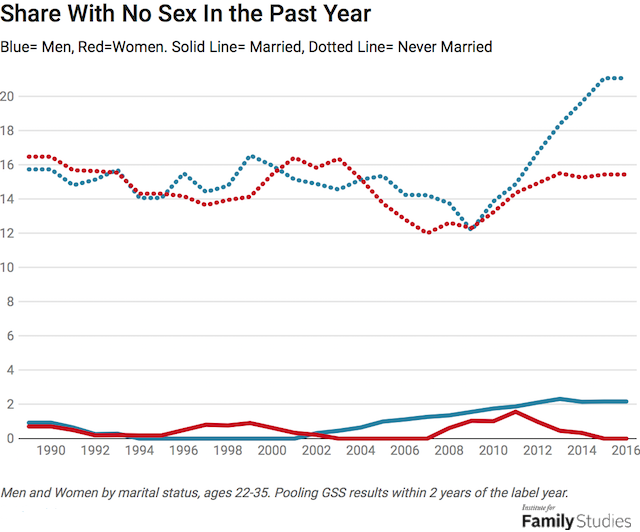 This suggests rather than people not having sex, they may be waiting until they are older. Which is not necessarily problematic but rather perhaps reflects more careful planning.