Tyler Cowen has written about the so-called ‘great stagnation‘ to describe what he perceives as stagnation of the U.S. economy and innovation in the aftermath of the 2008 crisis. But the evidence suggests he was wrong. In terms of GDP, stock market gains, Silicon Valley innovation, and plethora of other metrics, there is no stagnation, especially compared to the rest of the world, which is in worse shape than America.

Instead of stagnation, I propose a new concept: the great slow-down. But by slow-down, I don’t mean economic recession, but a slow down of life for most Americans. This is juxtaposed with a media that will become increasingly partisan and angry, but over issues that are increasingly inconsequential and the stakes minuscule, because the economy and society will have entered ‘autopilot’ mode and all of the uncertainly and risk that characterized earlier decades and generations will be mostly gone. So the media needs to create divisiveness, much in the same way sports teams create contrived rivalries, to keep ratings and advertising revenues high and to prevent boredom.

The slow-down will also be characterized by fewer hours worked and a decline in the labor participation rate, which are trends that are already underway but will continue even more-so in the years to come: 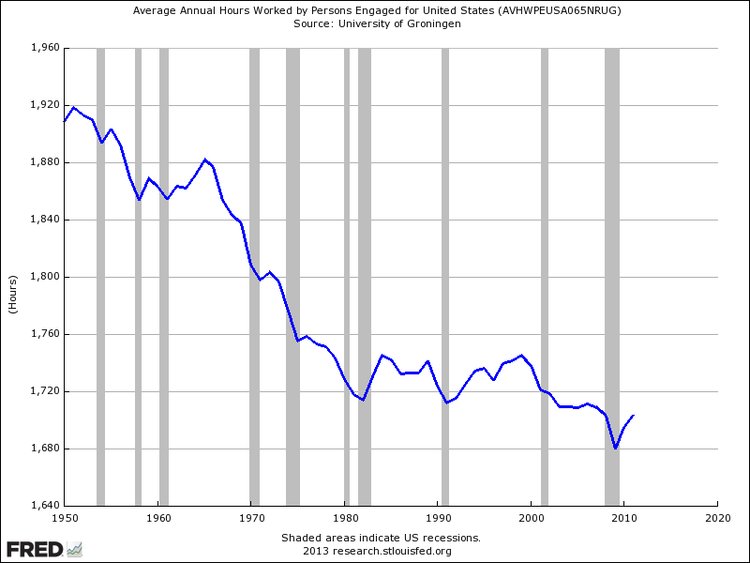 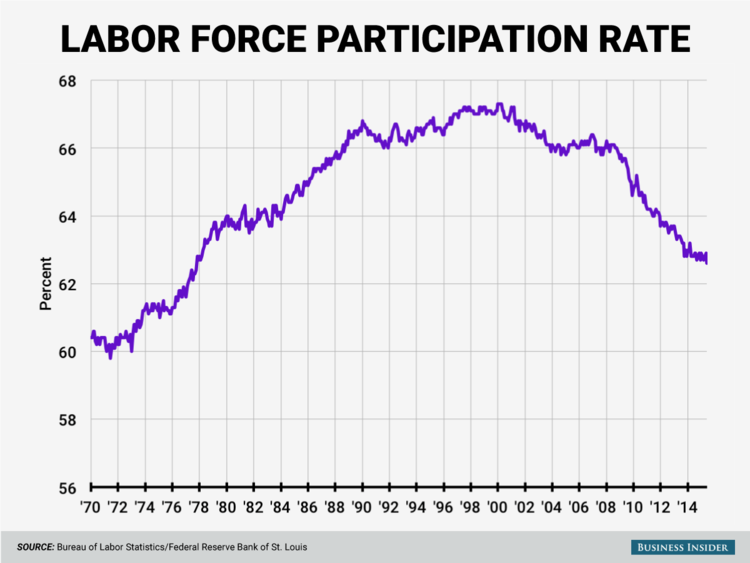 I predict the workweek will shorten to just 25-30 hours and the labor force participation rate may fall below 55%, yet the official unemployment rate will remain low and the economy strong by conventional metrics such as GDP, consumer spending, and exports. As evidence of this trend, in America, at least, for many jobs there is a marked slowdown on Friday; people tend leave work early, there are fewer customers, and there is less productivity compared to Monday, Tuesday, and Wednesday, which are the busiest days of the week. Thursday will become the new Friday. The workweek will shorten to 4 days, and the workday will shorten from 8 hours to possibly as few as 6.

Nominal wages will keep rising, but real wages will remain stagnant for most people. This leads to the question, how can a consumer-driven economy stave off collapse if so few people are working and real wages are stagnant? The answer is, domestic and foreign consumption from the top 10%, which is enough to offset any weakness from the bottom 90%; second, the rise of business to business commerce, which bypasses the consumer altogether; third, abundant credit.

The slow-down continues on the recent trend of young people–millennials and gen-z–delaying adulthood, such as choosing education and work experience over marriage and family formation, and ‘leaving the nest’ later in life, possibly using the saved money to buy a home instead of renting. It also means young people being much more thrifty and choosing to live a low-maintenance, minimalist lifestyle, eschewing consumerism. As evidence of this trend, nightclub attendance has plunged in recent years, alcohol and drug use is down, young people are less likely to get divorced, teenage pregnancy is at all-time lows, and young people are not driving as much.

With all this extra free time, Americans will have more time to consume, but also more time to engage in creative endeavors. This will lead to more innovation in the technologically sector, but also more creativity in the arts, which includes print media, internet media, and television. This creates a positive feedback loop of less need for labor, and hence more creativity and innovation, which leads to more productivity, and hence less labor, and so on.

Unlike the post-labor society envisioned by Marx, this is does not lead to communism, nor is communism needed to achieve it. Capitalism, private property will remain fully intact in spite of fewer people working and more leisure time. The tech elite will keep getting richer through asset appreciation and winner-take-all capitalism. Wealth inequality will keep widening, but it will not lead to revolution as Marx wrongly predicted it would.

The U.S. government will also resemble, if not already, what could be described as an ineffectual-ocracy, which is not the same as incompetence, but it means that government will become increasingly ineffective and stultified at doing anything unless there is a crisis that necessitates action (such as 2008), which is good news for libertarians, but it also explains Trump’s difficulty at effecting change (save for tax cuts). This is similar to the nightwatchman-state advocated by minarchists. At the same time, as another example of a contradiction, this ineffectiveness and sluggishness in government is coupled with an increasingly frenzied media, both traditional media and social media.