Chanda Chisala’s latest Unz Review article A Troublesome Intelligence? A Note to Richard Lynn, Charles Murray, James Thompson et al. is going viral, and like all of his articles, has generated enormous discussion. Chisala claims to have ‘refuted’ Charles Murray, Lynn, and other proponents of the se-called HBD movement.

Although some hereditarians had already noticed some troubling signs (for their hypothesis) that the black African kids in the UK appeared to be at worst only about 8 IQ points below white children (instead of at least 20 to 30 points expected by racial IQ hereditarians), my humble contribution to the debate was to note that Africans were almost always lumped together into the ‘black African’ group when doing such comparisons. This concealed the real picture of how certain nationalities that were migrating from English-speaking African countries to the UK were actually already outperforming the British whites. On the face of it, it does not seem useful to lump English-exposed Nigerian or Ghanaian immigrant children, for example, with children of Somali refugees fleeing much worse humanitarian emergencies in Africa, especially without any prior exposure to the English language.

As he points out, there is a roughly 1/2 standard deviation deficit between Africans immigrants and ‘White British’:

But this is not reflected by test scores:

Isolated evidence against HBD does not disprove it. The evidence Chisala presents does not suffice to disprove Charles Murray, Jensen, Ruston, etc., whose research mainly focuses on African Americans, not African immigrants to the UK. A few outliers is not a refutation of HBD. We’re talking a very small, select population. According to the last British census there are under 200,000 Nigerians in UK, which is around 0.3% of the population (and only 0.1% of the Nigerian population).

Much of his articles focus on Nigerian academic achievement in the UK as being evidence against HBD , but that is just a small fraction of the overall black UK population. Also academic performance is not the same as IQ, and as shown, tests still show a 1/2 SD gap.

It’s possible that a 1/2 standard IQ deficit can be overcome through conscientiousness, and that Black immigrants have to study much longer to produce the same test scores as White British students, which is not a factor considered in Chisala’s write-up or the test data analyzed, but an important one. However, in more difficult and competitive academic settings such as university, no amount of studying is sufficient to overcome the IQ gap.

Although early intervention such as head start can cause boost achievement, the gains evaporate by the third grade.

While it is true that the gap has narrowed a bit more for younger students, it is important to understand the Wilson effect: test scores are much more influenced by genetics at age 17, when shared environment only explains about 15% of the variance in cognitive ability, than at age 10, where shared environmental influences explain about double that.

Furthermore, as mentioned in the comments and most damning to Chisala’s thesis, in England, Blacks lag whites on the PISA:

In contrast to performance in GCSE examinations, White pupils in England obtain science scores around 40 points (more than a year of schooling) above their Black and Asian peers. Similar results hold in reading (25 points) and mathematics (30 points) with these differences between White and Black and Asian pupils statistically significant in each domain. Conversely, average scores are similar for pupils of White, Other and Mixed ethnicity, and do not ever reach statistical significanc 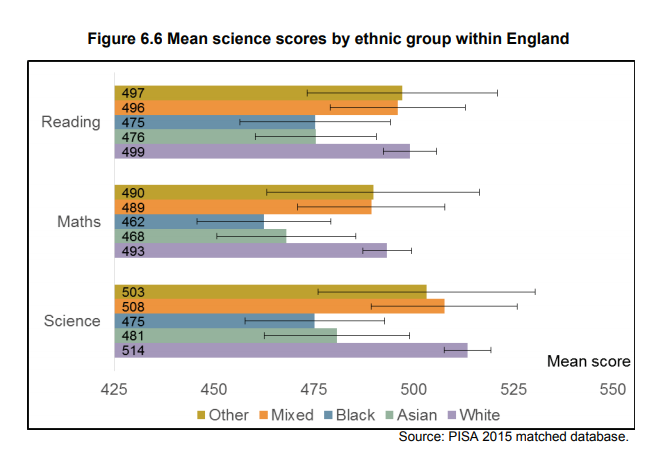 The black-white gap on the PISA corroborates with similar racial gaps observed with the SAT in the US.

There are two possible reason for GCSEs inflating Black’s scores: The GCSEs cover as many as eight subjects, many of which are non-academic (such as “Design and Technology,” “Business and Enterprise,” and “Arts”), whereas the PISA only covers reading, science, and math. Second, the GCSEs are a much higher stakes exam than the PISA, so it’s possible Blacks study longer in preparation for them.

However, in support of Chisala’s thesis, ‘English as first language’ African Blacks do as well as British Whites on the math and reading sub-tests of the KS2 (which unlike the GCSE, is taken at age 11 instead of 16).

Overall, Chisala provides some evidence that challenges HBD, but is far from outright refuting it as he purported to have done.