Ann Coulter continues to demonstrate her ignorance of politics:

Less than 1/2 the country even pays any significant income taxes, so MAXIMUM POSSIBLE popularity of GOPs tax bill is 40%. 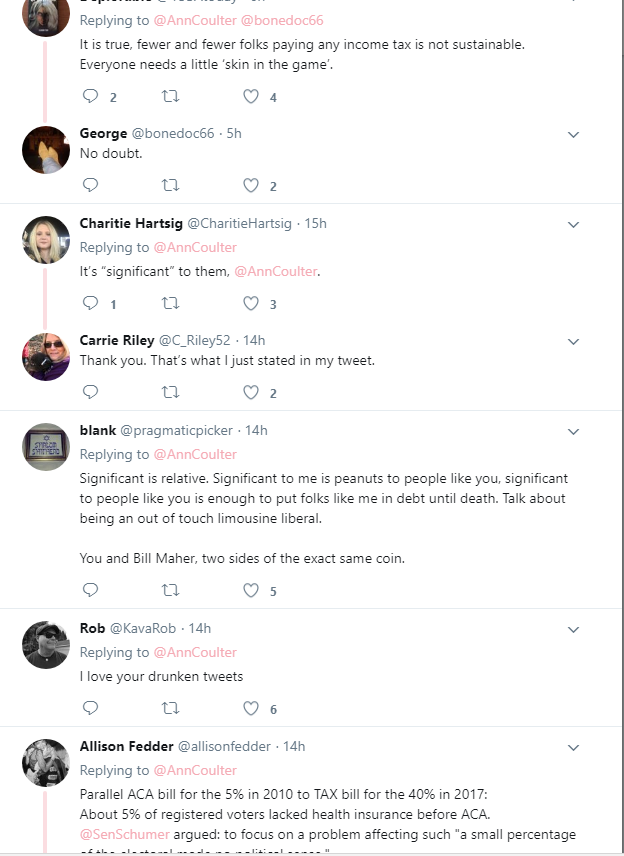 Note how she engages in misdirection by using a common argument of the right that “50% of the nation does not pay taxes” against the right…The fact that 50% of the country does not pay taxes is not a reason to oppose tax cuts; rather, it’s an argument for welfare reform and against democracy. But also, Trump supporters who do not pay taxes still support tax cuts, because it’s a matter of fairness, justness, and principle that people should be able to keep more of what they earn. In the paternalistic sense, much like the left, she thinks she knows what is best for Trump and his voters. As the screenshot above shows, the overwhelming majority of Trump voters want tax cuts.

Why does Trump keep tweeting about how strong the economy and stock market is, but relatively little about walls and immigration? Because, if Trump knows he cannot get immigration reform through, then tweeting about it will remind voters about his failure and also set unrealistically high expectations. Second, Trump voters (with the exception of harpies such as Ann Coulter and some others on the ‘dissident right’) care more about the stock market, patriotism, homeland security, tax cuts, and the economy than walls and immigration. Yes, voters want a wall, but they will settle for things that are much more realistic and feasible. People wonder “How did such a lousy, unpopular president as George W. Bush get two terms?” Because of that.

She’s a Leninist masquerading as a conservative, or maybe Leninists are the ultraconservatives. She wants a right-wing proletariat revolution against the wealthy.

This is the problem with the left. They want what they cannot have. They want power rather than accepting their place in society. All of 1960’s (and beyond) feminism is due to this.

Republicanism is not democratism. Burke 101.