The NYTs asks Why Are Middle-Aged Men Missing From the Labor Market?

As many have noted the unemployment rate is < 4%, but this ignores that a lot of people have dropped out the labor market permanently. Just drive down the street or go to any coffee shop or store during the weekday, during working hours, and you will see lots of middle-aged, seemingly able-bodied men who for whatever reason are not working. This is part of the broader, long-standing trend of the labor participation rate falling: 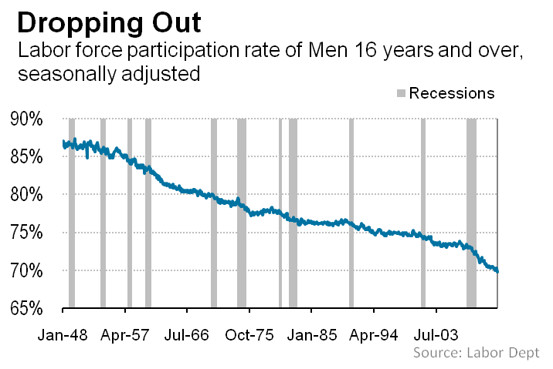 So why is it falling?

I think this is the least convincing or plausible explanation. There is scant evidence to suggest that increasing automation means fewer workers, at least not on an absolute basis. The total labor force keeps growing:

Part of the reason for this is that low-skilled jobs are also among the most difficult to automate–nursing, landscaping, hair cutting, burger flipping, etc. require fine motor control and cannot be easily automated at scale with existing technology. Automation can be capital-intensive, which makes it infeasible for many businesses. It’s not like a restaurant or salon, which operates on thin margins, can install expensive robots.

McDonald’s and other fast-food chains have had those self-ordering kiosks even as far back as 2007, same for self-checkout kiosks at grocery stores, yet the machines are prone to breaking or customers find them confusing, so it’s not like they have replaced cashiers. What happened instead is that the machines coexist with cashiers instead of replacing them altogether. And of course, ATMs failing to replace bankers, who either handle customer support or more complex transactions.

Fusion ignition was achieved for the first time ever a couple days ago–a major breakthrough–yet barber shops are still frozen in time from the early to mid 20th century. Low-skilled labor is like the ultimate ‘union’ being that it has the most bargaining power against the forces of technology and modernity. Cloud computing and smart phones cannot replace tools and the people who use them. For all the hype about self-driving trucks and the decline of truckers, there are more Amazon delivery trucks and other delivery drivers than ever before, such as Uber eats and DoorDash. Automating one part of the supply chain, still leaves the parts which are far harder to automate, but also a growing economy will mean more jobs overall.

Regarding the comment augment “who is going to buy the stuff if jobs are automated or there is too much wealth inequality,” this can be answered by the Pareto Principle: the top 20% wealthiest of consumers account for 40% of consumption–things like home renovations, Superbowl tickets, Disneyland season passes, iPhones, SUVs, and other expensive consumer discretionary items. When one looks at the data, consumer spending has not slowed at all, so such fears seem unfounded.

I think this is more plausible in explaining why the labor force participation rate has fallen compared to automation. It seems like many working-age men are suffering from chronic conditions that preclude them from working, such as drug addiction, vague non-specific illnesses (maybe long Covid?), mental illness, prescription drug abuse, etc. This is especially true in the 18-25 year-old age group: 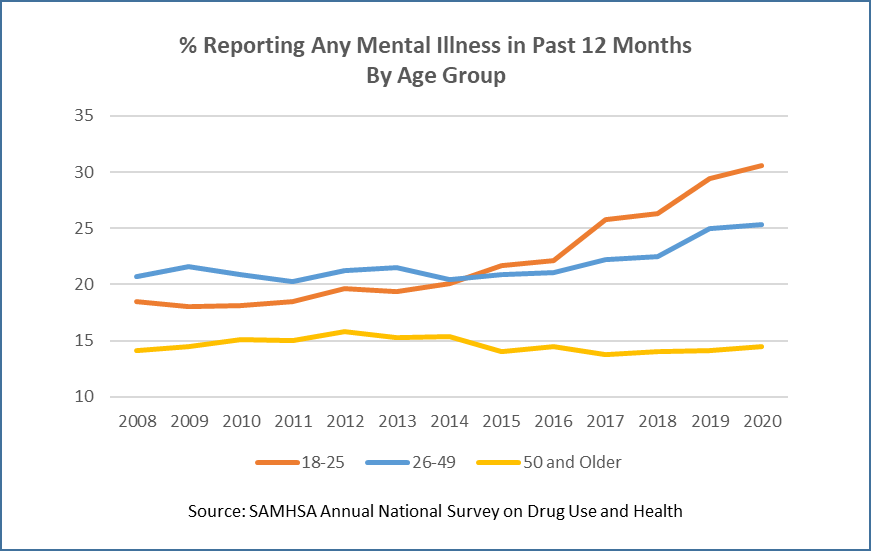 Maybe some of these illnesses are a form of a “somatization disorder”. You see this a lot on social media, where people claim or self-diagnose having a disability such as ADHD or autism-spectrum disorder, but who know if it’s exaggerated or not.

Maybe IQ is another possible factor. Dr. Jordan Peterson helped popularize an argument that a lot of people are excluded from the labor force by virtue of not being smart enough. According to Dr. Peterson, as predicted by the normal distribution of IQ scores, 15% of the general population has an IQ below 85 and either are unemployed due to insufficient skills or being untrainable.

This argument has gained some popularity among some on the center-right, which I think is better or more accurate than just just ascribing unemployment to laziness or the minimum wage. The minimum wage argument assumes that low-ROI employees will eventually become profitable for employers without a minimum wage floor, but it’s possible that some people are so incompetent or untrainable that that they are a net-negative value at any wage.

However, the IQ explanation does not answer why more people are not working, because it’s generally assumed that national IQ is stable over time. Dr. Peterson also argues that automation raises the cognitive floor for work, which could be true, but it’s not like low-skilled work has been automated-away, as discussed above. Low-skilled jobs are surprisingly impervious to automation, but they can be outsourced.

This could explain falling labor participation rates among the least educated of men, whose jobs may have been the most negatively affected by outsourcing or offshoring:

Another factor is the ‘wealth explosion’ hypothesis, which as far as I know, no one has discussed before, but I think it merits some consideration. It could explain chronic joblessness (or the so-called ‘NEET phenomenon’) among working-age men who may not fall under the above categories. The idea is that there is so much private wealth sloshing around that it disincentivizes the need to work. If capital, such as homes and stock prices, is appreciating faster than population growth and inflation, it stands to reason everyone will become wealthier in real terms, so people can live off of equity (or the expectation of a windfall) instead of wages. The S&P 500 has posted real total returns in excess of 10% annually since Jan 2009, even including 2022, compared to 1% annual population growth.

Household wealth doubled over the past decade, far exceeding inflation and population growth: 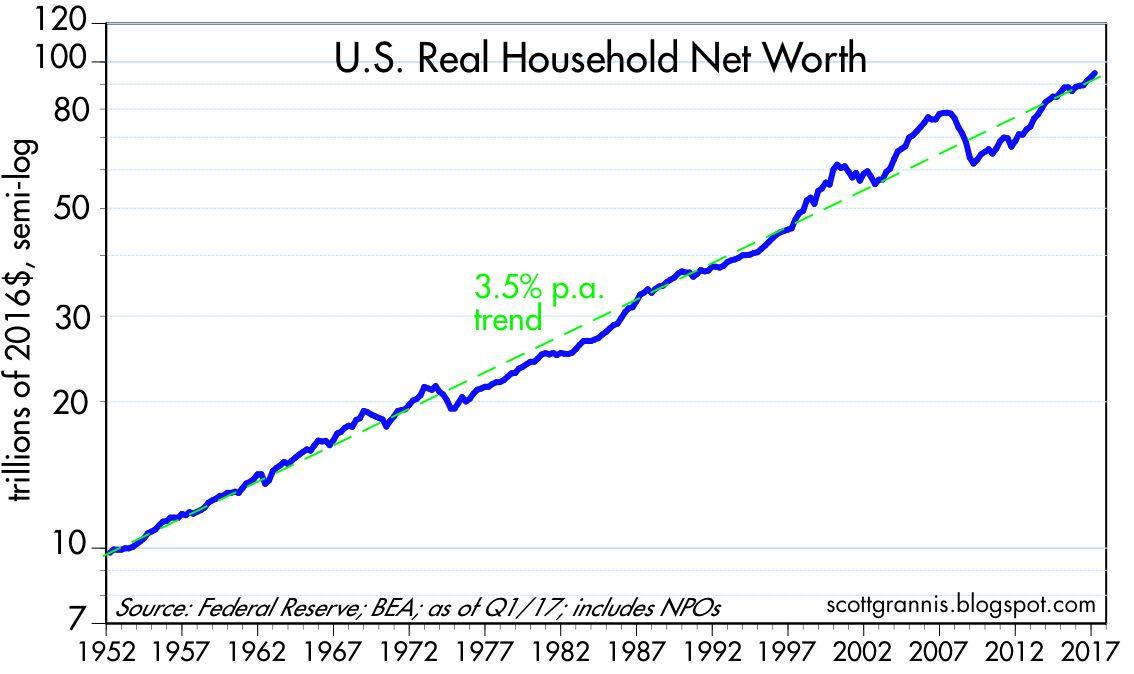 Same for real per-capita net worth (which adjusts for population growth): 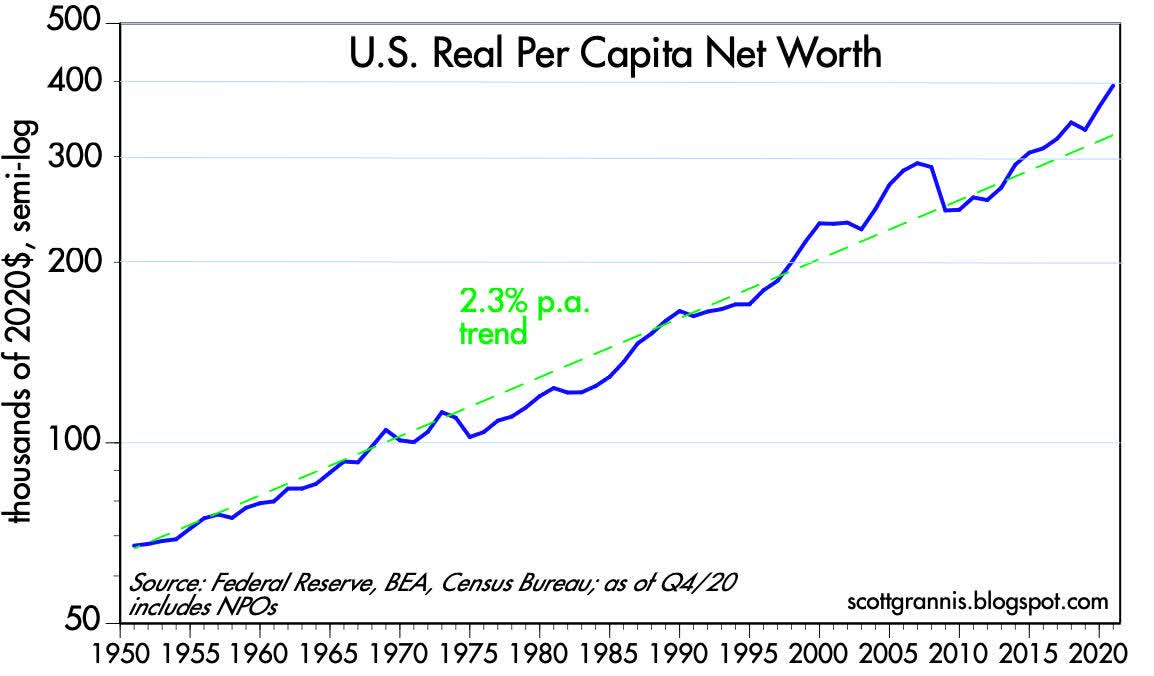 Baby boomers are set to pass to their children more than $68 trillion, the biggest wealth transfer ever. When you can expect a nice inheritance down the road, maybe this makes going to work less attractive or unnecessary.