Bitcoin and other cryptocurrencies are down 15-30% this week, vs the Nasdaq being up 3%. As far as predicting goes, this is right on the nose. You could not have asked for a more accurate forecast.

The Nasdaq was up 7% today, it’s best one-day gain in over a decade, and the S&P 500 was up 5%. This is why I have remained resolutely bullish and invested despite this bear market. When the market does recover, it will be so sudden that anyone on the sidelines will miss out. Just a hint of inflation abating will send stocks soaring, like today. If you’re not ‘in’, you will be chasing it all the way back up. The midterm elections will have no effect on the stock market or economy: large companies will continue to generate record profits regardless of which party has more seats. Discretionary consumer spending , especially for the top 10%, will keep doing well.

Regarding the 3x ETFs, TECL and TQQQ, those so far are neck-and-neck with Bitcoin again: 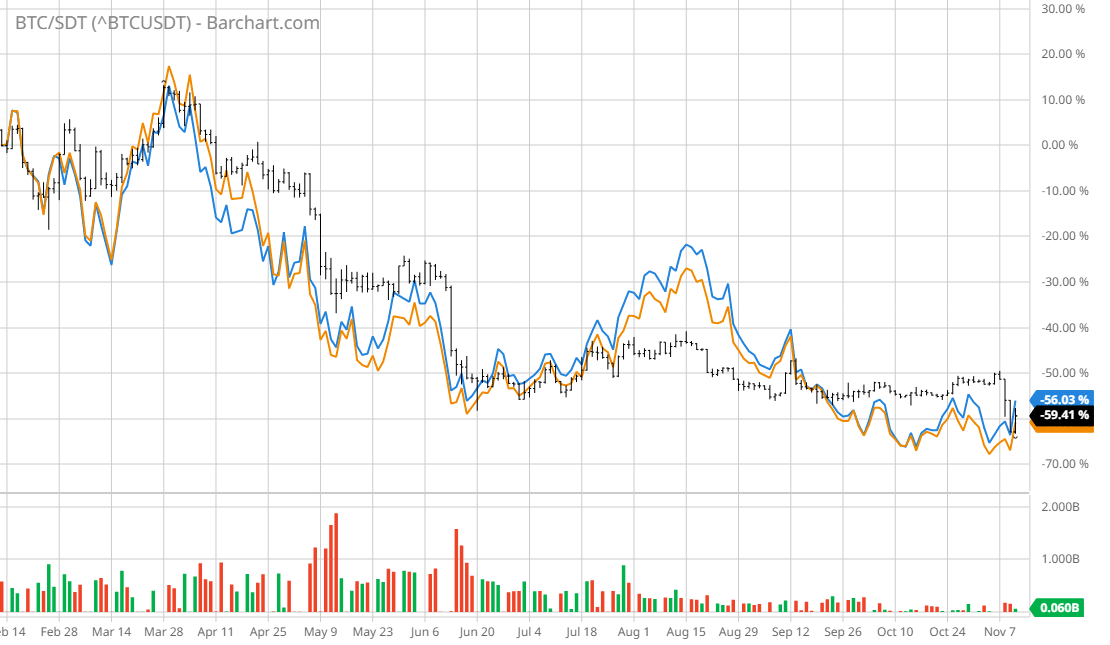 A few months ago the 3x etfs were solidly ahead of Bitcoin, but have pulled back due to market weakness over the past 2 months. The 3x ETFs have a decay factor, so this means they do much worse in a bear market compared to unleveraged variants. This is like a handicap that helps Bitcoin. If not for this handicap, Bitcoin would get crushed by the S&P 500 and Nasdaq, without this leverage drag.

Here’s James Altucher in regard to Bitcoin and the recent drama between Binance and FTX. CZ purportedly caused the insolvency and likely demise of FTX, which in part caused Bitcoin to fall this week. He writes:

Until there is some sort of good news, these coins will go down further. But I will say, and I’ll state the reasons why below, BTC and ETH are enormous buys here. But…short term is short term and it’s painful and it would be good if this didn’t happen.

– good inflation data tomorrow morning will send liquidity into the markets in anticipation of a Fed pivot on raising interest rates.

See the logical mistake here. If the objective is to make money, why not just buy the market, such as 3x tech ETFs, which were up 20% today, versus Bitcoin which fell 15% this week (and keeps falling with no end in sight)? That way you eliminate a risk, that being the insolvency of FTX, while still capturing the upside of good CPI data? Bitcoin and stocks are highly corrected, especially to the downside, but stocks do not have the uncertainty that Bitcoin does. So with stocks, you get equal or more upside as Bitcoin but less downside risk. Or to put in another way: Bitcoin assumes all of the risk of stocks, plus risks unique to Bitcoin. You may as well take you money and stick it on one of those little Viking rafts and light it ablaze.

FTX is doomed. Even if it does get bailed out, its business is probably close to worthless anyway, because all of its customers will have left and its reputation will be irreparably tarnished. Therefore, no one will lend it the $4-10 billion or so it needs. Customer funds will remain in a state of limbo, what little is left disbursed after a lengthy bankruptcy resolution process.
.

The second correct prediction is that Twitter is thriving under Elon Musk’s leadership, reporting record high usage. Even if Trump does not return, Elon has filled that role of turning controversy and division into user engagement and ad clicks. The always-wrong liberal media was predicting that Elon would drive people off the site to alternative platforms. Sure, it may be too soon to tell, but with the 2024 election coming up, why is anyone going to waste their time with Mastodon when all the action is on Twitter.