Over the past few years that has been considerable hype over tail-hedging funds, most notably Universa, which made headlines everywhere after it booked a 3,000-4,000% return in 2020:

A ‘Black Swan’ fund posted a massive 4,000% return after the coronavirus blew up markets

Investor who returned 4,000% in Q1 2020 explains what people get wrong about risk mitigation

Universa is run by Mark Spitznagel, who is close friends with Nassim Taleb. Taleb doesn’t run Universa per say, but his role is to indirectly promote it on Twitter and is an advisor; the bulk of the promotion is done by Mr. Spitznagel himself. I have counted dozens of headlines over the past few months alone of Mr. Spitznagel promoting his fund, such as on CNBC, the WSJ, and Bloomberg. It blurs the line between advertising and news. The guy is an indefatigable self-promoter: 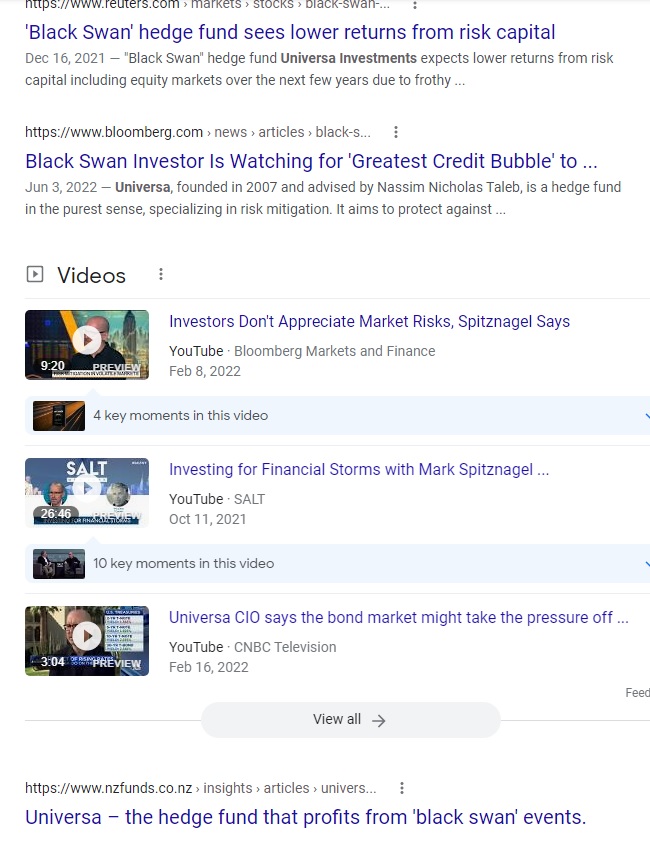 Universa’s strategy, from what I have gleaned from Mr. Spitznagel’s self-promotion and media coverage, is that it allocates a tiny amount of its portfolio, maybe 2-3%, in various derivatives that are supposed to make a large profit if volatility surges. So you would put 95% or so of your capital in the S&P 500 and then the other 5% in Universa’s proprietary volatility strategy. In Feb.-March 2020 these tiny derivative positions gained over 3,000%, hedging the S&P 500 portion during the Covid crash. It worked very well.

Yet unlike 2020, tail hedging has likely not worked for the 2022 bear market.

There is absolutely no way Universa hasn’t lost money during the 2022 bear market, due to the inability of volatility to spike. Of course I could be wrong given that Universa’s methods are proprietary, but tail-hedging strategies need a major spike in volatility to be effective, which hasn’t happened. As Covid panic gripped the world, in early 2020 the volatility index (^Vix) surged from 15 to 80 in under a month:

By comparison, today, volatility is still in the low 30s range despite the S&P 500 falling over 25%. This is a path dependency problem. For tail hedging to work it’s not enough for stocks to fall…stocks have to fall suddenly enough for volatility to spike a lot. As volatility surges, the secondary effects of volatility expansion manifest (so-called higher-order Greeks), which is how Universa made so much money in 2020. Derivatives which were trading for pennies in early February 2020 were worth dollars by March 2020. The 2022 bear market has been relatively subdued, spread out over 10 months, compared to in Feb-March 2020 when the S&P 500 lost 30% of its value in a month.

This shows the dangers of overhyped or oversaturated strategies. Just because something worked in the past, does not mean it will work again.

Apparently, funds associated with Taleb have a history of mixed performance, and then closing, such as Empirica Kurtosis Ltd, which somehow lost money in 2001 despite 911 (the ultimate ‘black swan’ event):

Before penning my previous commentary, I contacted Nassim Nicholas Taleb to check whether there were any inaccuracies in a Wall Street Journal article about the performance of his previous black swan fund, Empirica Kurtosis Ltd. The article said the fund had a 60% return in 2000 followed by “losses in 2001 and in 2002.” In 2003 and 2004 it had low single-digit gains, a period when hedge funds posted average returns of 20% and 9% respectively. The fund’s size was around $375 million when most of the assets were returned to investors.

The complicated interplay of path dependency and derivatives pricing can explain why black swan funds fail to deliver, even during 911, the 2022 bear market, or the 2000-2003 bear market. In a post from 2016 I calculate that a tail hedging strategy has a carry cost of 10%/year, which can be a significant performance drag. Although 10% is a lot more than the 1-2% allocated by Universa, the latter is somewhat misleading because it ignores turnover, which is key. Much like how insurance premiums are paid monthly, a strategy which only allocates 1% of its portfolio to hedging every month, this adds up to 10-12% over a year as expired or worthless options are replaced with new ones on a recurring monthly basis. And to realize maximum profits requires market timing to know when to exit the hedge, because staying in the trade for too long can mean the options expiring worthless. Bear markets tend to be brief and shallow compared to bull markets, so perhaps investors are better off just accepting that down years are inevitable instead of obsessing over loss mitigation, which can be counterproductive.