One of the major problems with the financial media is not that it’s inaccurate per say (or so-called ‘fake news’), but it’s a combination sensationalism and data being taken out of context. The reporting of the data is the bigger problem than the data itself. 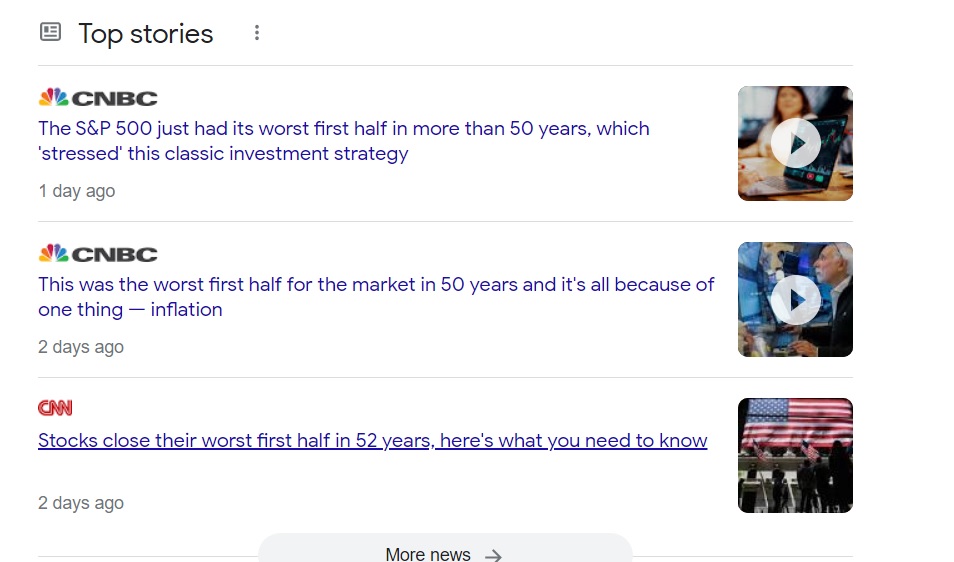 This sounds way worse than it actually is. It’s not that this is the worst bear market in 50 years or that this recent decline is exceptionally severe, but rather because the 2022 bear market happened to start at the very beginning of the year. As you can see, the S&P 500 peaked at 4,800 on January 3nd, 2022, which was also the first trading day of the year, for a total decline of 21% as of July 1st, 2022:

But what if the bear market had begun in October of 2021? Then presumably it would have fallen maybe 10% between October-Dec 30th, and then another 10% from Jan 1st to March 30th or so. So there would have been nothing newsworthy about it even though it’s the same percentage decline. This is also shows how it’s possible to make almost anything newsworthy by creating arbitrary slices or timeframes, such that it’s always possible to find a “best/worst start/ending for the S&P 500 for ‘X time duration'” For example: ‘the worst first quarter in 40 years’, or ‘the worst January in 20 years’, or ‘the worst first 2 months in 30 years,’ etc.

The 21% decline for 2022 is still way less than the 30% decline in early 2020 during Covid, or the 60% decline from 2007-2009 during the Great Recession, or the 50% decline from 2000-2003, and comparable to the 20% decline sustained 1998 during the Russian financial crisis, or the 19% decline in mid-2011. All of this is easily within the last 30 years, so it’s not like 20% declines are that uncommon. It’s just that it happened to coincide with the start of the year, and the path or trajectory of the bear market is such that it’s still ongoing by the half-way mark (unlike the Covid crash, which was steeper and deeper, but ended by April and had recovered mostly by July).

Second, has inflation been going up 8% every month? Huh? What do you mean? Consider the following headlines: 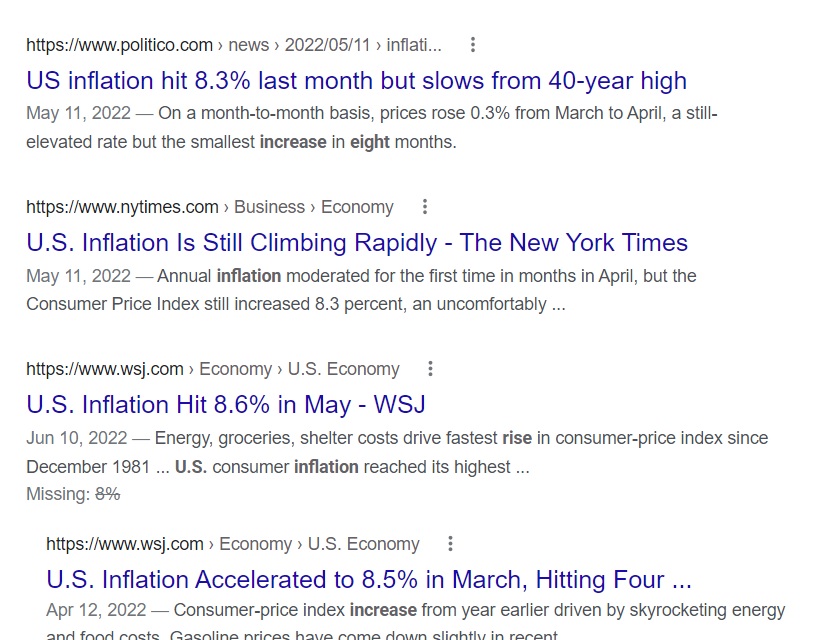 It says inflation rose 8% for March, April, May and June. Just going by the headlines alone would seem to suggest that inflation is rising 8% every month. But this makes no sense and would be a way worse inflation situation than presently. What this 8% actually means is the year-over-year change.

Consider that the CPI is modeled as a hypothetical step function:

For the first 12 months of 2021 inflation is completely unchanged, and then it abruptly rises 10%, and then for the next 12 months it’s unchanged again but 10% higher.

This would mean that for every month of 2022 inflation is 10% according to the headlines even if it’s unchanged on a month over month basis. The 10% is just the percentage change from a year ago.

This confusion can have political and economic implications too. Because people are constantly reminded every month of this 8% change, one can easily be under the mistaken impression that inflation is rising 8% every month and thus adjust their behaviors or beliefs accordingly, when clearly it’s not.

Given that inflation is reported monthly, it would be more accurate if the headline reported the monthly change instead of the year-over-year change, because that would give a more accurate picture of how much inflation is changing right now (or at least over the past month). To be honest, this used to confuse me too. I was like “Inflation is up 3% again, but it’s also 3% annually?” I’m sure I’m not the only one.