This passage regarding the show “Breaking Points” stood out:

Ball and Enjeti are not immensely popular influencers earning many millions of dollars from a vast audience of followers. But they’re also not toiling away on a show that’s effectively a nonprofitable side hustle. They instead fall into a middle ground that Lanier despaired didn’t exist for creative professionals. The total budget for “Breaking Points”—including all equipment, rental fees, and contractor costs—is around a million dollars a year. From this budget, Ball and Enjeti pay themselves individual incomes that are somewhat higher than what The Hill paid them for their old show, but not extravagantly so. They make, in other words, a solid and stable upper-middle-class living doing creative work, and they do so in exactly the manner that Kelly had proposed: asking for serious support from a small but loyal fan base.

$1 million/year is more than I would have guessed, for a middle class salary. By comparison, Freddie’s Substack blog brings in $200k/year (by his own admission) but costs nothing to run, and he keeps all of it instead of having to split it between two hosts. It’s evident Substack is vasty more profitable. However, the potential audience for video is much larger, but the costs are much higher, so you need a bigger audience for it to pay off (but the potential payoff is far larger compared to a newsletter).

Also “Breaking Points” was successful because of heavy promotion and Krystal’s earlier connections, not because its success was organic. As discussed earlier, neither Krystal nor Enjeti are that smart and just parrot stale populist talking points (the left-wing equivalent of Tucker). Nothing they produce ever goes viral or is successful organically, unlike Freddie, Zvi, and Richard Hanania, who are much smarter and have viral success.

Doesn’t the success of Freddie and Krystal prove that ‘1,000 true fans’ can work? Yes, it can work, but it’s just very improbable. If the goal is to make money or earn a decent living, trying to get a lot of fans is probably the worst way of going about it. Assuming a .10% conversion rate for targeted traffic, which is an optimistic conversion rate assuming the traffic is well-targeted, means you need a million views to acquire a thousand fans. The reason why the conversion rate is so low is because you’re not just getting someone to subscribe/read but also pay for content on a recurring basis. To get an idea of how hard this can be, a Facebook campaign may only bring just hundreds of hits over a period of a few days (again, assuming the audience is targeted with laser-like precision; casting a wider net will speed this up but increase costs dramatically and lower profitability because the conversion rate will be poorer).

Like Chris Anderson’s ‘long tail’ theory, Angela Duckworth’s ‘grit/growth mindset’, or Anders/Gladwell’s ‘10,000 hours‘, Kevin Kelly’s ‘1,000 true fans’ theory has always been sorta bullshit that has failed to replicate. [The long tail is debunked here.] Anderson and Kelly come across as out of touch boomers whose advice is outdated and a relic, much like Wired magazine. My complaint with boomers is not just pulling up the ladder and refusing to retire, but also failing to understand or grasp how much things have changed and how much more competitive everything has become.

A couple of months ago the Kevin Kelly post Bits of advice I wish I had known went viral. About half of the comments were positive or in agreement, but many were quite critical that Kelly’s advice was wrong and showed how out of touch he was with today’s much more competitive economic landscape. Niceness and a ‘firm handshake’ may not pay off like it did in the past. People are tired of platitudes that only seek to affirm the privileged worldview of whoever espouses them.

These trite sayings and rules are just a way for them to justify their position on the wealth pyramid in an easier era. “You’re not successful because you’re not putting in your ‘10,000 hours’…you need more grit.” There is not one thing today that isn’t more competitive and difficult than 50 years ago. You got kids learning calculus at 15 in high school and uploading code to GitHub. In the 70s hardly any high schoolers were learning calculus and GitHub didn’t exist. STEM majors have to compete against ultra-smart immigrants, whether it’s math competitions, college, or graduate school. Published papers in econ are much longer and data-dense than even as recently as 30 years ago. The Ivy League admits roughly the same number of students despite the US population doubling and more foreign students. 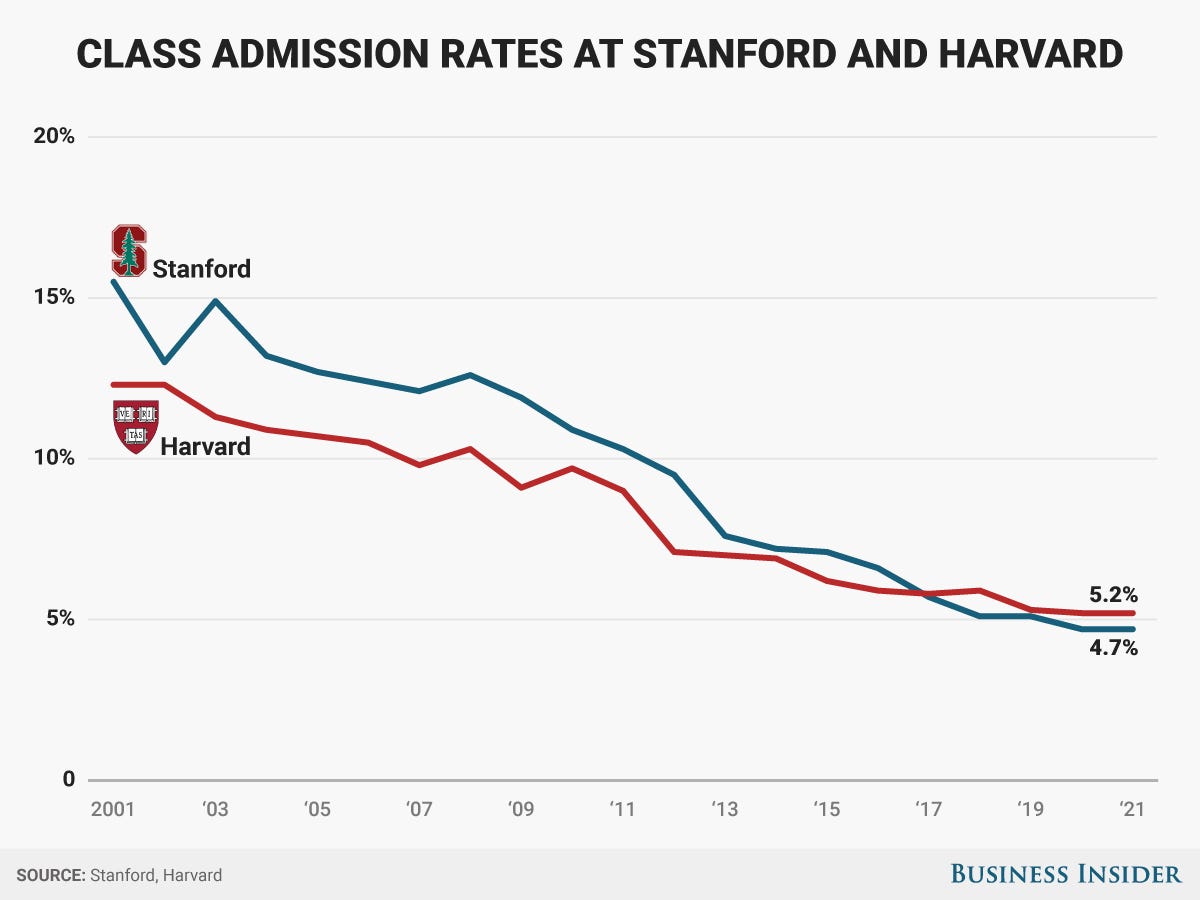 Same for the nine UC colleges: Writers, creative-types have to compete against armies of unpaid contributors. Professional jobs are equally or more competitive, with thousands of people applying for positions in which maybe only a couple dozen spots are open, such as in finance, law, or tech. There is no way that some homily or buzzword like “grit” can possibly give you an edge in such an environment when in the end the only deciding factor is raw intellect or talent.

This means that the median is lower even if the mean is higher (thanks to superstar outliers which skew the average). Today’s superstars, in finance, STEM, coding, podcasts, stock trading, YouTube, sports etc., are making more money and getting more recognition than earlier generations even after accounting for inflation, but the median is likely lower. There was no such thing as $300-thousand/year tech jobs in the 70s or people making millions in options trading, like we see today on /r/wallstreetbets, but it’s not like you needed to be the next Einstein to get into a good graduate school either.