Search interest in Ukraine, not surprisingly, has collapsed: 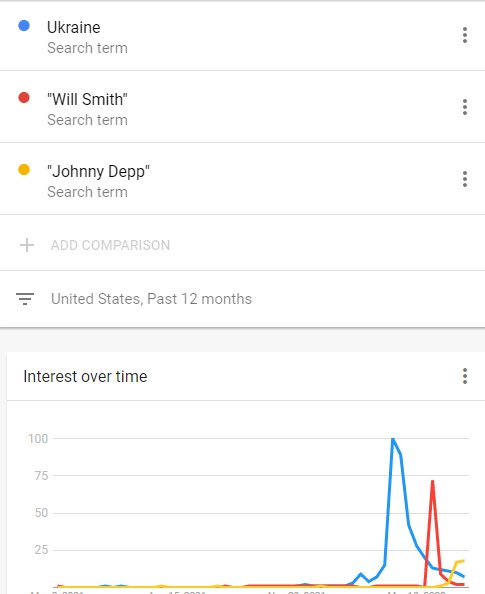 It’s been over 2 months since the invasion began. What happened to imminent threat of nuclear war or ww3? Over so soon? Over and over, we see a recurring pattern of things that are hyped by the media as a crisis, failing to live up to that designation. Will the liberal media apologize for trying to lead America into another war? Of course not.

Russia is holding back by not using its air force, as predicted, but for reason that are not understood. Maybe Russia has some ulterior motive, such as to inflate the price of oil or to weaken the EU. If Russia won a decisive victory, then that would introduce two new problems: what to do next, and also retaliation by NATO allies. It’s like a basketball game in which both teams agree to not score points in order to profit from an unlikely outcome, except the losers are Americans who donated to Ukraine. Both sides benefit from having the war drag out. Ukraine gets more aid. Putin builds up nationalist support. I think also conservatives and liberals alike are overestimating this historical significance of this. Russia does not threaten the ‘neo liberal world order’ at all, nor does it represent some ‘great Russian restoration’ either.

It looks like Elonis Muskus is not keeping to his promise of ‘free speech’. The assumption was that many previously banned users, mostly on the right, would either be allowed to make new accounts or get their old accounts restored. Nick Fuentes and Lindell both got banned after making new accounts. So maybe Vox Day was right that nothing would change. What is Musk’s role at this point? Who is overseeing which accounts get banned or not? The fact that Lindell and others were banned within hours suggests that someone was alerted and acted by suspending the accounts manually instead of algorithmically. Why can’t Musk veto this? It’s his site, after all. Maybe he doesn’t care, or he doesn’t consider it his responsibility, or he doesn’t want the controversy. Another possibility is that he doesn’t technically own Twitter in its entirety. By not putting up all his money, the ownership is divided between multiple backers, such as JP Morgan.

There was a lot of confusion as to why the stock market did so well in 2020 & 2021 despite everything that was going wrong. This is the cooling off period after such strong gains earlier. 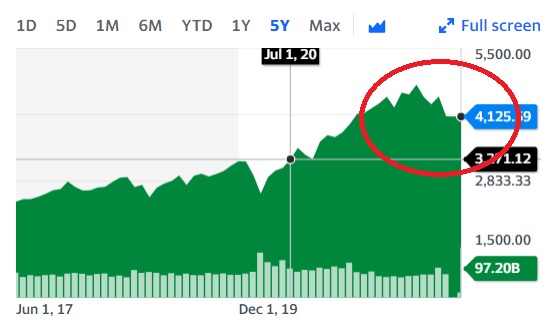 CPI has gained 10% since January 2021 vs. 13% gains for the S&P 500, which includes dividends, to technically the market is still hedging inflation, just not as well as before.