Time for a market update

1. The fed raised interest rates yesterday, as expected. I am very optimistic about the stock market going forward. I’m expecting new highs this year despite the recent selling due to Ukraine.

2. Right now, real interest rates are the lowest ever, at around negative 6-8%. This is hugely negative, as shown below (courtesy of Lyn Alden): 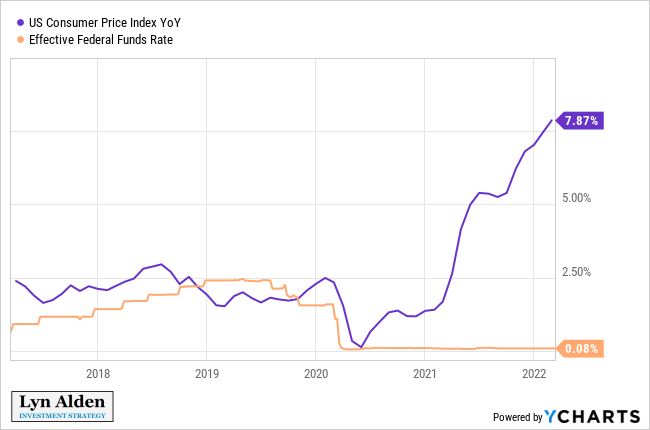 I don’t think the difference has ever been this wide ever.

This is extremely bullish for stocks, because all fixed income assets are now losing money due to inflation, so the only way to get a real return is to invest in risker asset classes such as stocks.

3. I emphatically believe that 3x tech ETFs (TECL & TQQQ) will beat Bitcoin for 2022, just as they did for 2021. TECL and TQQQ will make new highs later this year but Bitcoin will remain well below $60k. It will not even come close to its old high of $69k.

4. To beat a dead horse, Bitcoin and gold are bad hedges against inflation. To understand why, the CPI is not some arbitrary number; it’s correlated with companies raising or lowering prices, which are passed on to consumers. So when consumers are feeling inflation, as they are now, that is from companies raising prices. Simple enough. So higher prices thus means more earnings for companies and thus higher share prices. But gold and Bitcoin does not have that property. Investing in gold is not like investing in the ‘thing’ that is inflation, but more like investing in something that you hope will go up because of inflation. The difference is subtle but important.

5. There is considerable concern by the media, laypeople, and pundits about fed being too aggressive and ‘crashing’ the economy. Such fears are greatly unfounded. The fed will raise rates very, very slowly and with tons of advance warning. It’s not going to be like in the late ’70s under Volcker when interest rates shot higher without warning. Not once in my lifetime have I seen the fed tank the markets. It’s more like the fed being tailwind. Since 2008 the pattern has been for the fed to be way behind the curve [meaning that real interest rates will remain solidly negative], by keeping real interest rates negative and raising rates very slowly, and with tons of advance warning even as the stock market and economy rips higher. Stocks generated real returns in the 80s, 90s, 2003-2007, 2015-2017 despite the fed raising rates.

6. The fed is forcing people into the market and riskier assets overall, like it or not. But participation will be uneven. Bitcoin and gold will miss out. Mega tech companies and ‘big retail’ will lead the way higher. Growth stocks are ill advised, which is why I am pessimistic about ARKK. Oil, commodity stocks also have too much volatility.