I saw this tweetstorm by “PrestonPysh” going viral:

The below chart is the QQQ (which tracks the Nasdaq 100), which has done very well over the past decade (as I correctly predicted many times it would):

Why does everything feel like the world is falling apart, yet the stock market has looked like this since 2009?

Well, here's a thread w/ some interesting charts that will help you understand: what you see is NOT what you get.

PrestonPysh’s argument is that the inflation of the ‘money supply’ is why the Nasdaq has done so well:

The point is this. Central banks are trying to do everything possible to keep the global economy afloat. Through their constant manipulation of the currency supply, they are obliterating the middle class & adding immeasurable systematic risk to the system. These actions…

This is wrong. Surging profits and earnings is the main reason, due to an increasingly large percentage of economic activity being funneled into maybe 10-20 of the biggest, most dominant tech, payment, and retail firms such as Microsoft, Tesla, Walmart, Nike, Amazon, Google, Facebook, Disney, Netflix, Visa/Mastercard, and Apple, and this trend has only accelerated since Covid due to small/medium-sized business closures and shutdowns.

So to put in perspective how much earnings have surged, Facebook stock (which I have been recommending since $25/share in 2012) has a PE ratio of 24 at a price of $325/share. When it went public in 2011 at $33/share it had a PE ratio of 100. So earnings went up 40x in a decade. Insane. Same for other major tech companies. No amount of ‘money printing’ can make an already $100-billion dollar company (in 2011) grow its earnings by 40x in a decade. No amount of central banking can make Tesla go from some obscure niche auto brand that was losing money, to a major player and generating over a billion dollars a year in annual earnings.

The second reason is due to overall growth of the U.S. economy and strong consumer spending. Neither Congress nor ‘the Fed’ can just make an economy grow (they tried in Japan for almost 2 decades). Central banking and fiscal policy is more of a tool to create conditions that are conducive to growth, than an elixir. U.S. GDP grew 45% from $15 trillion in 2011 to $22 trillion now, but it took $5 trillion of stimulus spending just to maybe, at best, add a few percent of GDP in 2020/2021, so it’s evident that stimulus spending is not that effective at growing an economy relative to its great cost. Also, B2B is huge: for example, Google and Facebook selling ad space to cloud companies, which sell cloud hosting to businesses that also buy Google and Facebook ads. So it’s like a big loop of businesses selling ad space, cloud hosting, and software to each other.

So what is the author’s solution? Buy Bitcoin, of course:

So what can you expect? Volatility. And lots of it. And if you think it'll be predictable, good luck. Predicting cascading credit impairment is akin to predicting avalanches (complex systems). I own #Bitcoin because it's the one thing they can't manipulate or control.

Even if we assume the premise of the author’s argument is correct, buying Bitcoin is the worst way of going about it. The correct investment is literally in the first chart he provided: just buy the Nasdaq 100 (or specifically, an ETF which tracks it such as QQQ). Why would anyone take the unnecessary risk of buying Bitcoin, which since Feb 2021 has done nothing despite the Nasdaq making strong gains and CPI going up, when a much more reliable inflation hedge is staring him in the face?

Every time I look at the chart of Bitcoin it’s either down >1-3% or flat. I cannot even remember the last time Bitcoin was up more than 8% in a single day. Bitcoin never keeps gains anymore. How again does losing money every week, day, etc. help when hedging inflation? It does not take a math whizz to see that Bitcoin has 5-10x the volatility of the S&P 500 and none of the upside. I have never see anything hyped as much as Bitcoin that has delivered so little.

1% weekly gains with the Nasdaq or S&P 500? No thanks. Give me 2-10% daily down days. I prefer to lose more money and take more risk, thank you very much. Of course, you can point to pre-2018 Bitcoin performance, but this is 2022, not 2013 or 2011. Bitcoin, being more of a commodity than an equity, will likely face limited upside like all past commodity bubbles after bursting

Companies can hedge inflation by raising prices, but Bitcoin, like all commodities, is just subject to the whims of supply and demand.

And Bitcoin is much more heavily manipulated by exchanges and whales than most stocks or any index fund. The U.S. government is all over Bitcoin: the idea that you can hedge inflation and uncertainty or be anonymous with Bitcoin are both false. Bitcoin, like gold, is a better hedge if your local currency is in freefall such as in Turkey [1] (Turkey borrowing dollars and Euros means that the falling Lira makes those debts go up, increasing indebtedness and creating a cascade effect or more debt and a falling currency). There is no need to buy gold or Bitcoin to hedge when when the dollar is the global ‘unit of wealth’. Inflation just means that Americans will see a shifting of the y-axis in terms of prices, wages, and asset appreciation, but not much else changes (stagnant wages coupled with high inflation is exceedingly rare and even contradictory, as wages in and of themselves are a major input for inflation).

It’s not like Americans became poorer as a result of high inflation, compared to Turkey or Venezuela. Indeed, American household net worth surged in 2021 on a real basis despite high inflation. 5% gains in CPI is no match for 15% gains in homes and 25% gains for the S&P 500.

This brings me back to why some investors are so much more successful than others. It’s often assumed that to be a ‘great investor’ that you either need insider information or be psychic, but it really just comes down to minimizing sub-optimal investments (like commodities, which Bitcoin shares many of the same properties) and just sticking to what is simple and what works, like the Nasdaq 100 or the S&P 500. Someone who merely bought and held QQQ in 2011 would have outperformed the vast majority of active managers. The data is pretty grim for active management:

The performance of active managers gets much, much worse when you look at longer time horizons: over a 10-year period, only 25% of all active funds beat their passive counterparts, according to the Morningstar report. 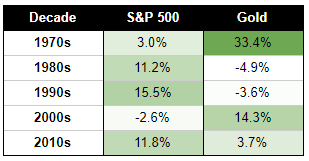 But like Bitcoin, much of gold’s gains are compressed to just two decades: the 70s and 2000’s. Otherwise, it does poorly, so bad that it barely keeps up with CPI: 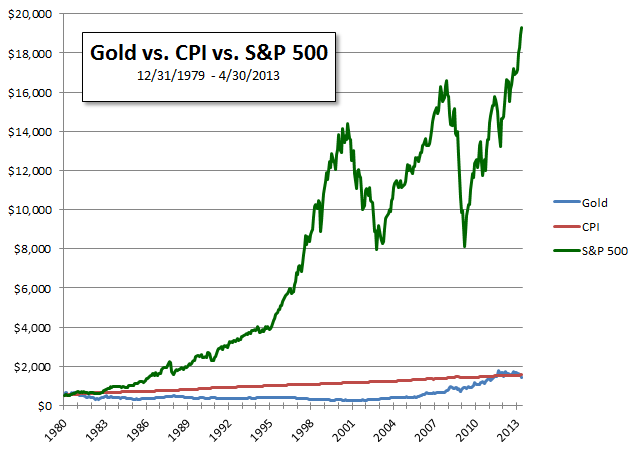 The worst case scenario for Bitcoin investors is if buying Bitcoin today is like buying gold in 1980, in which investors would have to wait a generation just to see new highs on a nominal basis, and even 40 years later would still be lagging on a real basis. This is not a risk I would be willing to take.

[1] To expound on this, because the U.S. dollar is the official ‘global unit’ of wealth, it means that gold prices tend to be quoted in dollars, so Americans who buy gold to hedge inflation are not really hedging anything unless the price of gold goes up in real terms, and there is no guarantee it will (it didn’t in 2021). But someone in Turkey who converts their Turkish Lira into gold, is able to hedge the lira losing value to the US dollar, because gold prices tend to be pegged to the dollar, not the Lira. So the hedge works.