Why Is It So Hard to Be Rational?

Often, I asked myself, How would Greg think? I adopted his habit of tracking what I knew and how well I knew it, so that I could separate my well-founded opinions from my provisional views. Bad investors, Greg told me, often had flat, loosely drawn maps of their own knowledge, but good ones were careful cartographers, distinguishing between settled, surveyed, and unexplored territories. Through all this, our lives unfolded. Around the time I left my grad program to try out journalism, Greg swooned over his girlfriend’s rational mind, married her, and became a director at a hedge fund. His net worth is now several thousand times my own.

In the above article, the author, a journalist, contrasts the trajectory of his life to that of his friend, Greg, who became a wealthy hedge fund director. He argues that his friend acted rationally by choosing a lucrative career path.

Although ‘Greg’ has much more money, one of the perks of being a professional writer is people care about your opinions , which can potentially have some lasting or permanent impact on society or policy. ‘The Classics’ are immortalized, but Ray Dalio in 2019 wrote a book about his ‘principles’. Owing to Dalio’s wealth, the eponymously titled book made a splash for a week and was soon forgotten, with thousands of unsold copies returned to the publisher and condemned to an ignominious pulping. No one talks about his book anymore…for all intent and purposes, it does not exist. But pundits, critics still talk about the contemporary classics too, such as the epic-sized works of William Gaddis, Jonathan Franzen, David Foster Wallace, Pynchon, and Don Delillo.

Having a lot of money does not in any way equal power or influence. Jimmy John Liautaud is the founder of the Jimmy Johns sandwich chain. He’s worth over $1 billion, but pundits such as Paul Krugman, Glenn Greenwald, and Mathew Yglasis, who have huge platforms, keep dominating the discourse on important issues. Being rich is hardly sufficient to have a large platform. It means you can buy a big house, which is cool, but it’s not nearly enough to make people want to care about your opinions. Having academic credentials is no guarantee either, although I think it helps way more than just having a lot of money.

Scott, spending no money, generates more traffic to his Substack blog–and his book reviews have more readers and traffic than even Bill Gates’ own book review website/blog, Gates Notes–than probably any NYTs or New Yorker writer (if we use comments as a proxy for traffic, Scott’s blog routinely generates hundreds of comments per article, comparable to or even exceeding that of the NYTs (not the entire website, obviously, but just for the specific columnist)).

Tyler Cowen, mentioned in the above article as an example of a ‘rationalist blogger’, has one of the most popular and influential blogs out there, Marginal Revolution, read by thousands of people everyday by some of the leading experts in economics, and his podcast, Conversations With Tyler, is also a success despite (I am assuming) spending no money.

Curtis Yarvin/Moldbug created an entire body of political theory/philosophy from scratch, generating considerable influence and even permeating the ranks of the Trump administration (Bannon purportedly read Moldbug and may have been influenced by him), all while spending no money to promote it, only because his ideas went viral and generated traction by virtue of their originality and his prolific exposition.

But couldn’t Mr. Liautaud use his wealth to buy influence? Hardly, at least not lasting influence. Money can buy media attention, but not influence. People tend to vastly overestimate the importance of money in terms of influence, or overestimate the exchange rate of dollars into influence. Even when the ultra-wealthy try to use their money to try to buy influence, their success tends to be quite limited or fleeting, nor does fame and success at one endeavor–hedge funds, software, or sandwich-making–extend to publishing, politics, or punditry.

Deceased Texas oil billionaire T Boone Pickens in 2008 spent $100 million of his own fortune to promote his eponymous ‘Pickens’ Plan,’ which called for spending $1 trillion on wind power as a form of energy independence. Have you heard of it? Thought so. However it does have a Wikipedia page, so there is at least an indelible record that it existed even if no one remembers it. In writing this post, I am old enough to remember seeing ads for it on CNBC, and Mr. Pickens making a few appearances to promote it, but by 2009 there was no talk of it ever again, suggesting it had no lasting impact, so all for naught. I think his hope was the incoming administration would try to implement the plan.

Multimillionaire inventor Dean Kamen spent tens of millions of dollars of his own money, plus VC backers such as John Doerr, to promote his Segway personal human transporter, which is effectively an electric scooter with a self-balancing mechanism using gyroscopes. It was probably most over-hyped consumer product ever, and in December 2000 was unveiled on Good Morning America to millions, but the only lasting impact it had was being the butt of jokes and having a cameo in the movie ‘Mallcop’. Mr. Kamen projected sales of at least a hundred-thousand Segways in the first year, but by 2020, when production finally ceased, only 140,000 had been sold total.

Can’t the wealthy use their money to indirectly affect politics, such as Peter Thiel’s involvement with the Trump administration. The ability of the wealthy to sway voters or to overcome the inertia of ‘politics as usual’ is limited. Regarding Mr. Thiel, all of his unconventional cabinet and staff recommendations were passed up, save for Steve Bannon, who was gone by August 2017 after a turbulent and ineffective run, in which he clashed with other staff. All of Trump’s high-level appointments were from established political, legal, and finance backgrounds, not deviating from orthodoxy despite otherwise running an unorthodox campaign.

During the 2015 primaries Trump spent considerably less than his opponents. Jeb Bush purportedly spent $100-150 million and came in last. And in 2016 TV ad spending, Trump lagged: 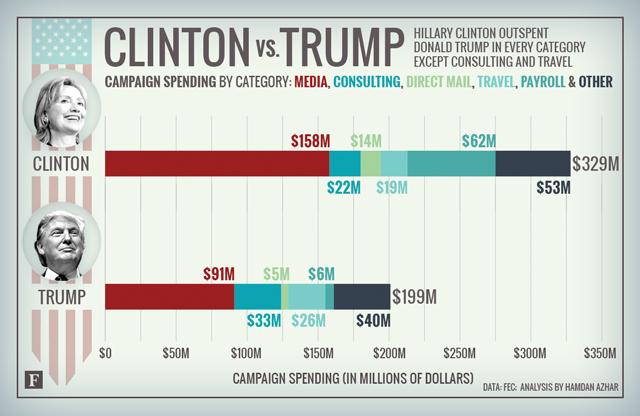 Michael Bloomberg in just (four!) months spent $1 billion of his personal fortune on his 2020 White House run, and like Jeb, was doomed from the onset, because although money buys ads and media attention, it does not apparently buy likability. By March 2020, as Covid swept New York, his campaign folded and he vanished from public sight seemingly overnight. Like Pickens, at least he got a Wikipedia page out of it, so not a total loss, I suppose.

So I guess this is good news for those who fear Mark Zuckerberg can buy his way into office; not being particularly likable or having a rabid fan base as Trump has, likely will face the same challenges as any other candidate.

Bill Gates’ 1995 book “The Road Ahead”, about his predictions in technology, had some lasting impact and at the time got much more media coverage than Day Dalio’s book or any any subsequent book [without using Google, what is the name of Mr. Gates’ 2021 book on climate change]. Although Bill Gates is much wealthier now, in the ’90s he arguably had much more influence and was more of celebrity than he is now. In 1995 the world wide web was only in its infancy, but nowadays audiences have become much more fragmented, and even the ultra-wealthy have to compete with podcasts, social media, apps, and YouTube for an audience, whereas in the ’90s everything was funneled through TV, radio, or print. Attention is limited by population size, which grows slowly, but the number of distractions and content creators has exploded in recent years, making it harder than ever for business pundits and elites to divert such scarce, invaluable attention to their published works and opinions.

Elon Musk a few years ago wrote a book, an autobiography; that is all I remember. I do however remember Peter Thiel’s book, “Zero to One”, which had some impact.

“The Rise of the Meritocracy,” 1958, by British sociologist Michael Young, continues to be referenced, as does “The Society of the Spectacle”, 1968, by Guy Debord, as both books contain themes that are directly pertinent and foreshadowing of society today. Do you think any billionaire’s book will have the lasting impact of those examples? Likely not.