I came across this story, which went viral MIT Predicted in 1972 That Society Will Collapse This Century. New Research Shows We’re on Schedule.

“Trump winning was supposed to tank the U.S. economy,” according to Paul Krugman

“Trump tariffs were supposed to cause economic crisis”

“We must shutdown small businesses to flatten the curve”

“2008 was supposed to be the end of capitalism, housing market, etc.”

“Covid was supposed to kill 1-3% of the world population”

The post-Covid economic and stock market boom exceeded even the the most optimistic of forecasts. Individuals who stayed invested made a killing, and the market keeps going up. It pays to be optimistic unless you’re the media, in which doom and gloom means more clicks and ad revenue.

These complex, interconnected system are more resistant to collapse than the media and experts assume. The bigger a system becomes, the more resources will be summoned to protect and ensure its continued existence, which is why if I had to predict, there will be no collapse and the bull market and economic expansion will continue even in spite of all the things that are going wrong. At any point in history, there will always be things that are going wrong somewhere.

To keep the system going, it’s remarkable how much spending has ballooned over the past 13 years, and this is coming from someone who is receptive to MMT. After 911, only the airlines got a bailout, which came to a paltry $15 billion. The 2008 bailouts set a precedent for printing-away problems, which at the time was a monumental undertaking and not without considerable deliberation, yet another $1 trillion for infrastructure (on top of all the trillions for Covid aid) feels like an afterthought, at a whim. We really are in the era of free money. We’re nowhere near the boundary what is possible. The idea is that massive cash infusions, from both the treasury and the fed, can attenuate market volatility and cycles until the underlying problem goes away. The boom-bust cycle has thus since 2009 become a perpetual ‘boom’, with low interest rates and stimulus providing a boost when things get turbulent.

As far as the social sciences are concerned, these experts tend to have a terrible track record at this sort of stuff, whether it’s incorrect calls of a housing market crash, stock market crash, recession, hyperinflation, etc. Economics and finance is one of the few areas in which the experts and the ‘expert consensus’ can be hopefully wrong…you typically do not see this with fields such as physics or math. Not just econ, but also behavior psychology: anywhere from 50-75% of psychological studies don’t replicate. Priming, one of the cornerstone findings of the best-selling Thinking Fast and Slow, failed to replicate. “Five years later, Kahneman’s concerns have been largely confirmed. Major studies in social priming research have failed to replicate and the replicability of results in social psychology is estimated to be only 25% (OSC, 2015)”

Forecasts of resource depletion and unsustainability also have poor track record, too. In 2007 there were concerns about commodity hyperinflation leading to worldwide shortages. A decade later, prices would make new lows: 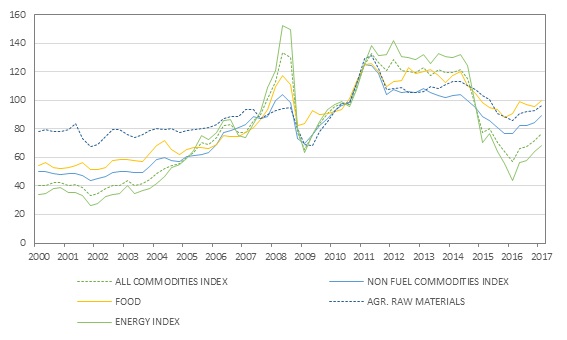 ‘Expert’ Robert Shill Shiller for years been calling for a stock market and real estate crash based on some useless/obsolete metric. Michael Burry famous for ‘predicting’ and profiting from the 2008 collapse of the housing market, for years has been sounding the alarm of high inflation. Peter Schiff is another one, since 2008 has been predicting the collapse of the US dollar. Mike ‘coke head’ Saylor shepherded his followers to buy bitcoin above $50,000 because of the promise it would change the world. If fool me once, shame on you, fool me twice, shame on me, the enduring popularity of the aforementioned individuals suggests there is considerable shame to go around.

But going back to the MIT forecast, 80 years remain in this century. Looking out that far ahead is impossible for any social science model (economists fail even when trying to look ahead a few years), but it would not surprise me at all if the post-2009 expansion continues interrupted for 3 more more decades based on the interest rate cycle and the favorable spread between inflation and short-term bonds (the idea that near-zero interest rates forces people to invest in riskier assets). And also the tech sector and retail being major drivers of growth too.