The possibility of a post-scarcity economy is no longer a sci-fi or political-science abstraction, but is rapidly becoming reality, as I predicted a year ago in the Jan 2020 article Is a post-scarcity economy possible? It’s already happening. Since the publication of that article, all of the trends I forecasted have accelerated: bigger and richer mega-tech companies, a higher unemployment rate, more stimulus spending, lower interest rates, etc. Covid has further accelerated these trends, but it has also ushered in a new era of permanence: permanent job and business closures, permanent social distancing and other restrictions, permanent stimulus, permanently-low interest rates, permanent tech fortunes that only go up and never down, permanently-high stock market, etc.

As opposed to the false dichotomy of having to choose between capitalism or communism, America’s post-post scarcity economy combines both the private and public sector, in terms of government stimulus but also the growing role of tech companies, with both contributing to this ‘new normal’. It is a sort of hybridization of privatization (in terms of tech fortunes and privatized profits and wealth) and socialism (huge stimulus programs; the government ‘picking winners and losers’, the losers generally being small business, and the winners being ‘big retail and ‘big tech’).

Rather then wealth being entirely downstream from the government in the form of remittances and services, it is also from asset appreciation, such as rapidly surging share prices of certain tech companies, surging real estate prices, crypto, collecting rent on properties, and also highly lucrative tech employment. Instead of going to work, people are making money, and some even becoming wealthy, with stocks and other investments. For example, assuming that the S&P 500 gains 20%/years, a $1,000/month stimulus check invested for 10 years ($120,000 principle) in the market, yields $$315,000, which is almost enough to live off of: 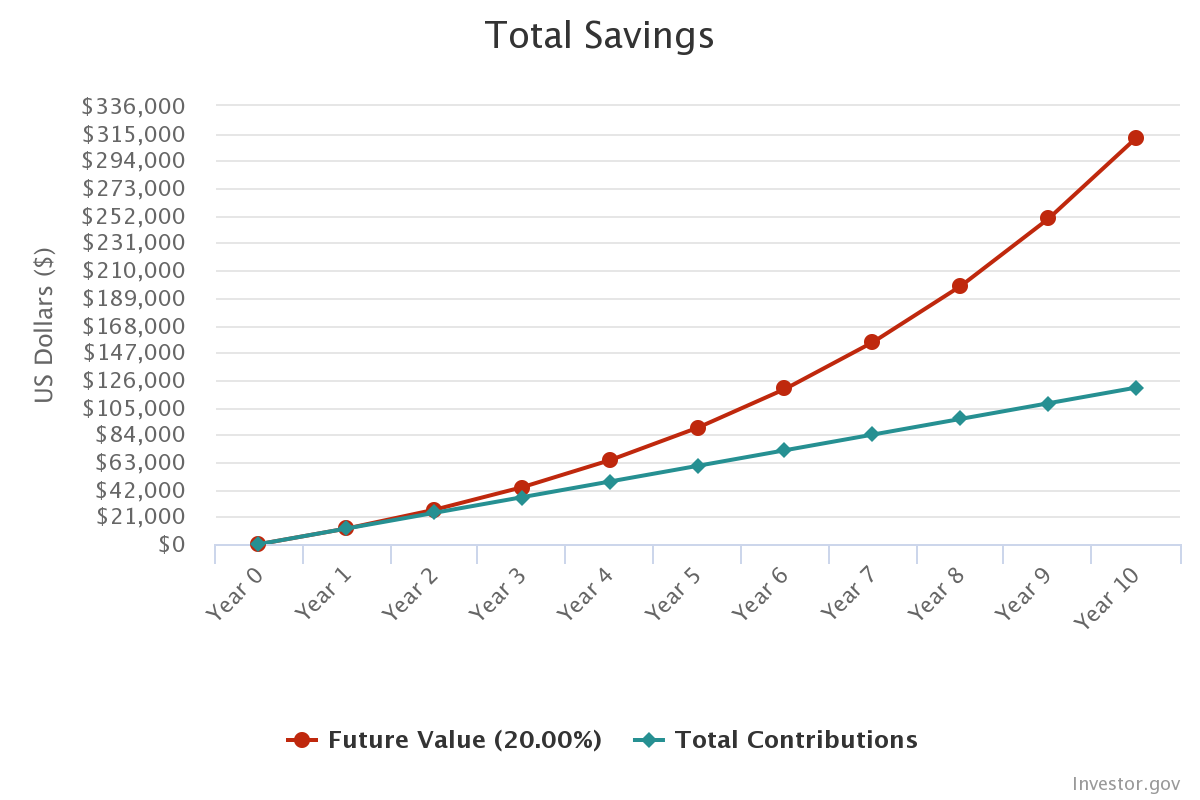 Remote work and the rise of ecommerce and remote learning due to the pandemic, has created a huge demand for coders and developers, with large salaries to match. The infinity-squeeze of GME stock is a symptom of the post-scarcity economy, as millions of young people with an abundance of cash (such as from parents, government stimulus, lucrative tech jobs, etc.) and free time get wealthy by speculating, such as in Tesla and GameStop stock. Other are making money with Cryptocurrency and with Only Fans, Uber Eats, and other gig and self-directed employment.

‘Meme warfare’ has gone from being an internet joke or phenomenon, to now having major potential economic and financial implications. /r/WallStreetBets, which I have written about on this blog for years, has gone from relative obscurity, to being the biggest thing in the news now and arguably the most important Reddit sub now, even more important than /r/The_Donald was in 2016-2019. Once again, I was on the forefront of these trend by writing about WSB , before it blew up in the news. I knew that with all the money these guys were making, it would not stay obscure for long. And abundance of free time due to Covid restrictions, joblessness, and passive tech, inheritance, and stock riches, means thousands of young people who would otherwise be busy with work and other responsibilities, can not only dictate the news cycle , but become wealthy while doing so. It has upended the top-down media and financial hierarchy.

IQ, again, acts as a sorting mechanism for the winners and losers’ of this ‘new normal’. If you look at the performance of the stock market over the past decade and also all the people getting rich with GME and Tesla options on /r/WallStreetBets, it is primarily high-IQ people who are getting rich (even on GME, as IQ is highly predictive of success at option trading), and it is people who have low/average IQs, who have low-paying jobs and without nice tech jobs or stock portfolios, who are falling behind. These people are most dependent on government stimulus and other programs to supplement their already meager incomes in the service sector, assuming they have not been laid off due to Covid.

The welfare state will continue to expand to support the increasingly large percentage of people who contribute little to nothing to the economy (in terms of consuming more in benefits and handouts than they pay in taxes), having been laid off or unable to find work due to Covid, but also due to rising healthcare and other costs, also made worse by Covid. In spite of so much spending, in addition to trillions of dollars of stimulus spending, interest rates and inflation will remain bafflingly low.

What about the mainstream-conservative argument that such programs will discourage work and thus hurt the economy, by creating a nation of moochers. As discussed in an earlier post, this argument does not take into account individual preferences. There are enough people who are looking for work and or want to earn more money, that even if tens of millions of Americans drop out, there will still be plenty of people who value money over leisure, who will still work in spite of a UBI and other handouts. This will boost economic productivity and is good for employers and customers, because people who dislike their jobs and value leisure over money, will drop out. This means a higher quality pool of applicants for employers to choose from, and better job prospects for such applicants, too, so everyone wins.

However, some argue that such spending is not sustainable and may end badly, which is a reasonable and logical position to take but not yet supported by the evidence. Thomas Friedman argues that America risks becoming more fragile, writing:

This is all actually making our system more fragile…Now that so many countries, led by the U.S., have massively increased their debt loads, if we got even a small burst of inflation that drove interest on the 10-year Treasury to 3 percent from 1 percent, the amount of money the U.S. would have to devote to debt servicing would be so enormous that little money might be left for discretionary spending on research, infrastructure or education — or another rainy day…Sure, we could then just print even more money, but that could threaten the status of the dollar as the world’s reserve currency and raise our borrowing costs even more.

Thomas Friedman has always been a staunch defender of the status quo, economically and politically, so it is interesting to see him, with Biden as president no less, beginning to embrace the same talking points as the likes of Peter Schiff and others on the libertarian/heterodox-side of politics and the economy. This signals a shift in the New York Times and other left-wing publications in embracing more populist viewpoints, with Trump gone, whereas when Trump was in power, they were resolutely pro-left. It is often assumed that the media, especially print media, is biased to the left, and it mostly is , but they also care about capturing the ‘zeitgeist’ of the nation, so if there if a growing national backlash, especially online, against the perceived overcoddling of college students, for example, you will start seeing articles by left-wing publications, such as from The Atlantic, about how college students have become overcoddled and intolerant of opposing viewpoints.

But in regard to Mr. Friedman, the evidence suggests the system is stronger than ever. The US stock market and economy outperformed the rest of developed and emerging world post-Covid in spite of a lot of deaths, and in spite of considerable government spending, the US dollar did not fall, nor did inflation budge. It is not the absolute debt that matters so much, but rather the interest paid on debt relative to GDP, which is very low and has been falling for a long time. Also relative power matters, too, and America is still on top even if it is in decline, as the rest of the world is declining further and faster. Rising interest rates does not mean that the debt will be harder to service, because the economy will also be growing more too. There is also huge demand for treasuries by pensions and sovereign funds, which should keep rates very low for a long time to come.