From Unz, by Jarred Taylor The Taboo That Could Break America, Part III

Last week I explained why different groups don’t achieve at the same level. It’s because the races are not identical. There are all sorts of interesting differences – this paper from just last year says you can tell American blacks from American whites just from the patterns of microbes living in their mouths. But the most important difference is in average IQ. As I explained last week, a white person is seven times more likely than a black person to have an IQ of 110 or higher, and 30 times more likely to have an IQ of 125 or higher. Very probably, 50 to 80 percent of the gap is due to genes, and no one has figured out how to change the environment to make up for the rest.

Expecting blacks to be just as good as whites at math is as deluded as expecting women to be just as tall as men. Yes, there are some blacks who are good at math and there are some really tall women, but the average man is taller than the average woman. There is no practical way to change that. When it comes to race, we are supposed to close our eyes and pretend that white racism – and only racism – is holding back blacks and Hispanics..

I agree with Jarred about the black-white IQ gap and how it explains the disparity of achievement between whites and blacks, and how this gap is impervious to efforts to ameliorate it without lowering standards. Both gaps–IQ and achievement–have persisted for decades (ever since testing began), in spite of efforts to narrow it.
Regarding the black-white IQ gap, it also appears in tests that do not have a cultural or language component, such as spatial reasoning, object assembly, and digit recall. It cannot be accounted for by lead poisoning, nutritional deficiencies, ‘bad parenting,’ or other environmental factors either.

Addressing the immutability and predictive power of IQ, opens a Pandora’s box that calls into doubt and questions many of the commonly held assumptions about democracy and about equality, so it is understandable why so many good-intentioned people won’t broach the subject.

I do not think the problem is ignorance; I believe almost everyone, even liberals, knows that the IQ gap exists, and that the achievement gap is largely tantamount to an IQ gap. In spite of preaching tolerance and equality, many liberals have a tacit awareness that some groups have a propensity for certain undesirable behaviors, compared to other groups, and this explains why rich liberals prefer insular communities with like-minded liberals, that have fewer of these undesirable people and their undesirable behaviors.

However, to try to steelman the opposing side, in regard to crime, I have a somewhat differing view compared to Mr. Taylor. This belief or notion that white people are exemplars and angels of morality who do not do crime , is false , too. The courts in America are full of whites ,too. Not just drug offenses but property crime, white collar crime, and so on. The three Twitter hackers in July who stole $120k in Bitcoin are white. On YouTube, there are a lot of videos and channels by former criminals and mob guys, all white, who for years evaded capture while stealing millions of dollars. Regarding the apparent huge disparity between white crime vs black crime and incarceration on a per-capita basis, one must take into account that whites, having higher IQs than blacks, some of this difference may be attributable to the fact that whites are smart enough to avoid being caught or may engage in the type of crimes that have a lower risk of being caught (such as cybercrime or identify theft). Without an arrest, it is not possible to make a determination of the race.

Norway, Sweden, Denmark and other predominantly white countries have surprisingly high levels of property crime , such as robbery, vehicle theft, and burglary, compared to the US: 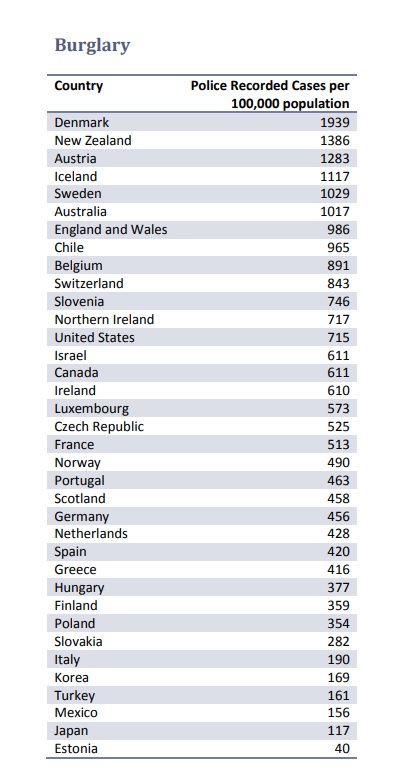 In the 19th and early 20th century, crime was very common, such as bank heists, stagecoach heists, and ‘smash and grabs,’ much more so than now on a per-capita basis, and much of it perpetrated by whites, as blacks had much more limited mobility and fewer rights. The situation got so bad by the early 20th century, with police often out-gunned by robbers, that the FBI was created to give the law enforcement the necessary resources to handle the problem.

Imagine you’re a white person living in a mostly white neighborhood. Your biggest concern is probably white-on-white crime or black-on-white crime, but not black-on-black crime. So removing the third option effectively significantly lowers the black crime rate as it pertains to whites (because blacks commit a lot of crime against other blacks, such as botched drug deals, domestic disputes, and so on).

When black people commit crime, but it tends to be mostly against other black people and impulsive in nature and with a limited scope of damage, such as a domestic dispute or a botched drug deal, whereas when whites commit crime, it is more indiscriminate and the potential damage is far greater (such as Enron , Madoff, or the 2020 twitter hack), and the duration of the crime may be much longer, owing to the smarts to avoid being caught. Maybe a black person is more likely to break into your car or loot the local Target over some percived racial injustice, but a white person is more likely to hack into your brokerage account, or loot the pension, or pull the rug out of your investment.

People tend to be motivated by the same sorts of things regardless of race: power, money, and status, and this means many will take shortcuts–be it crime–to attain those ends. Crime is everywhere and universal, regardless of economic background, race, or ethnicity. Store detectives are instructed to watch everyone, because there is no reliable profile of a likely shoplifter. Because crime is much more phycological/behavioral than pertaining to something that downstream from an immutable trait such as IQ, it is one of the few things in which HBD is not that useful, although race does tend to predict the type of crimes committed by individuals. The ability to memorize, solve/understand abstractions, reason…all of those are linked to IQ, but behavior and morality…not so much.