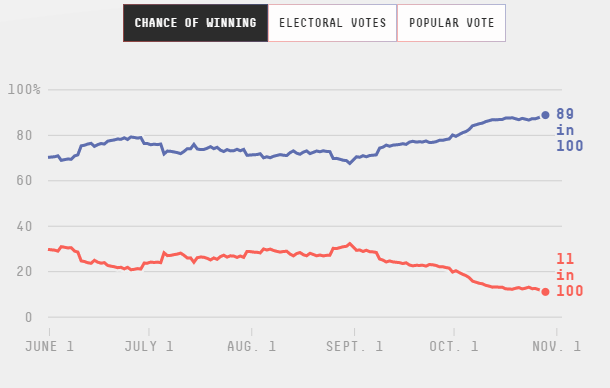 This is really bad. Even in 2016, in the final week, Trump’s odds were at around 25% after bottoming out at 11% in mid-October. Then Trump began a surge that untimely lead up to his largely unexpected victory. On the night of the election, Trump’s odds got as high as 30%, according to 538, before voting began, whereas sources such as the New Yok Times and HuffPo put Trump’s odds at only 2-10%. Bu t rather than surging, Trump’s odds [if we go by 538; betting markets give much higher odds, at around 36% chance of Trump winning] have been steadily falling since September. I’m not sure why either Trump’s odds have fallen so precipitously since September or why there is such a large discrepancy between 538 and betting markets.

The Trump landslide that Vox Day has predicted numerous times on his blog, does not appear to be in the cards. If Trump wins, it will be similar to 2016, in which he wins the electoral vote but loses the popular vote. It is not looking that good no matter how you try to goose the numbers.

I think the liberal media has had some success at perpetuating this dubious narrative that Trump botched the Covid response and is entirely to blame for the so-called second wave of cases in the US (even though the US economy and stock market has completely recovered, and European countries that initially seemed to be doing better than the US are also having massive second waves). If a lie is repeated often enough, people will begin to believe it. The BLM unrest may have not have helped either, although it’s hard to say either way.

The wildcard that can explain the discrepancy between 538 and betting markets, is turnout. Polls do not capture turnout. The prediction models , which failed so spectacularly in 2016, relied on polls to try to extrapolate electoral results. However, Hillary’s turnout was not high enough, so she lost those key states in spite of the polls giving her a lead. Old, white suburban and rural voters are a reliable voting bloc and carried Trump to victory in 2016, but minorities and young people are less reliable even if there are a lot of them and they overwhelmingly support Biden (support is not the same as showing up to vote). That’s why I still think it’s a toss-up, because predicting turnout is so hard yet such an important variable.

I don’t think Biden will be as bad as many conservatives are predicting, assuming, of course, Harris does not replace him. Under Biden I do not see much happening for the worse. There is not much of a difference between Biden and Trump in terms of economic policy. Biden’s focus for much of 2021-2022 will be on more stimulus and a getting a vaccine pushed through, which isn’t much different from what Trump wants. The daunting logistics of distrusting vaccines to all 200+ million adult Americans who want or need one, will likely keep Biden’s and congresses hands tied for a long time. Income taxes will not go up. I don’t think Biden will attempt to pack the Supreme Court. I do not see relations with China getting worse. There is a 10-20% chance of recession under Biden (versus a smaller probability under Trump), but these percentages are sorta meaningless anyway. A Biden presidency will entail a small diminishment of America on the ‘world stage’ and make America smaller and less relevant economically, culturally, and militaristically.

Even if Trump wins, as I said before, in regard to tech censorship, immigration, or any of the other issues important to voters, little will change except for perhaps temporary restrictions on H-1B visas, that will certainly be rescinded if and when the dems get back in power (because republicans are incapable of passing legislation). It is will be a continuation of the past 4 years in terms of the suppression of speech online and in academia. So there really is not much of a difference between Trump or Biden, in that Biden seeks to perpetuate a broken system and Trump is unwilling/unable to do anything about it despite signaling his opposition to it, which at best may be just superficial anyway. A case can be made that Trump is a guiding light who illuminates a pathway for future leaders, but the problem is, Trump only has at most 4 more years, and unless politicians similar to him are able to finish where he left off, politics will return to how they were. It is not like he has 20+ years to implement a grand plan.