It is not news that congressional approval ratings are low. Reports by Gallup show only 17-20% Americans approve of how Congress is doing its job, which is a multi-decade low: 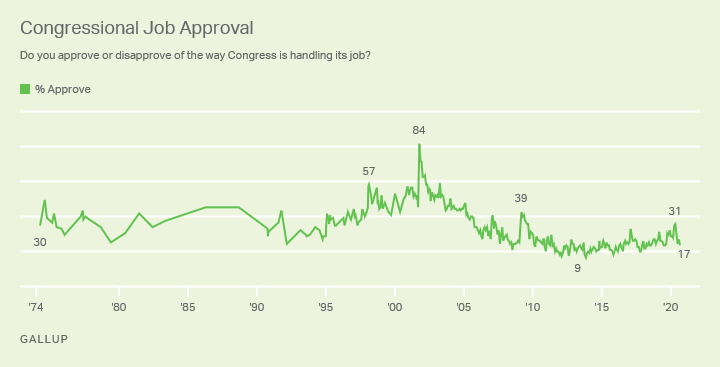 Although Congress’s favorability ratings have always been low, hovering around 30% approval since polling began in the mid-70s, the general trend since 2005 or so has been decidedly lower. At the rate things are going, it will not be long before single-digit approval ratings become the ‘new normal’. Even if Americans are increasingly divided on cultural and economic issues, we should expect if Congress panders to at least one side of the aisle, that favorability ratings should at least be buoyed by the side that is being appeased, but it would seem neither side is satisfied.

So the question is, why is there such a large disconnect from what voters/Americans want, and how Congress is acting? What could explain this apparent indifference or apathy? It is evident that the preferences of voters does not factor highly in the decision-making process in Washington, although the same disconnect also seems to apply to state governments, as we saw with Covid. Voters did not ‘ask’ for a war on terror, a Patriot Act, quarantines and lockdowns, 2 wars in the Middle East, multiple bailouts and stimulus programs due to Covid, the 2008 bank bailout, etc., The obvious answer is, America is a constitutional republic, not a direct democracy. We, ‘the American people’, vote for candidates who best represent our views and preferences, but after the pols close, the votes are counted, and the winners are declared, any further decision making is out of the public’s hands. We have to put our faith in these elected officials, to the best of their ability, uphold the values that they ostensibly represent.

So if Washington and policy makers, in general, are not answering to ‘the American people’ and their voters, who are they answering to? One explanation, at least in regard to Trump’s presidency, is the so-called ‘deep state’: a sundry network of power-brokers and actors who run things behind the scenes, who can overrun the President and or who set the agenda. A second possibly that there exists a committee, although it may not be a actual committee of people, but in a more abstract sense, a dementalized network of influential people, institutions, or beliefs, that much like the concept of the ‘invisible hand’ in economics, pushes or nudges society in its desired or predetermined direction. In a concrete sense, the committee may be composed of hundreds of even thousands of individuals, few of whom are in direct contact with each other–such as think tanks, academics, columnists, business leaders, etc.–who through their writings or more subtle means, guide Washington. The alleged existence of so-called ‘shadow committees’ are a mainstay of conspiracy theories, but they are usually framed as being centralized entities that issue orders top-down. But it’s possible for the committee to be decentralized, too, with no specific leader or organization that can be tied to it.

In a more abstract sense, it is a belief system, and although it is hard to make precise something that is never explicated, one can infer that it tends to favor ‘rule of law’, free trade, individual property rights, and societal and global stability, among other objectives. So this means, the arc of policy will tend towards those things: The War on Terror to help maintain global stability; the Patriot Act and the creation of the Department of Homeland Security, to maintain domestic security; the bank bailouts, to help maintain financial stability and preserve individual wealth, etc. Some of these initiatives, such as the 2008 bank bailouts, were greatly unpopular with the ‘general public’ but deemed necessary nonetheless in keeping with this belief system.