The President’s failure to suppress the virus’s spread through strong, consistent national policies and Speaker Pelosi’s failure to make a deal with the Treasury Secretary for a new round of stimulus (so far) have now hit the tape in the form of a deceleration in hiring this past month.

The media narrative over the past 2 months or so is that trump’s alleged failure to contain Covid (blaming all 200k+ deaths squarely on Trump in spite of the fact that countries that had ‘optimal’ responses and leadership, such as Germany, still had a lot of deaths, and that the individual states had considerable discretion in handling Covid, but I digress) has hurt the economy, so we should expect the economies of countries that had optimal responses, such as Germany, to have outperformed the US. If we use stock market performance as a proxy for economic health/performance, then we would expect the German market (the DAX 100) to have outperformed the S&P 500 since the start of the pandemic. As it turns out, that is not the case: 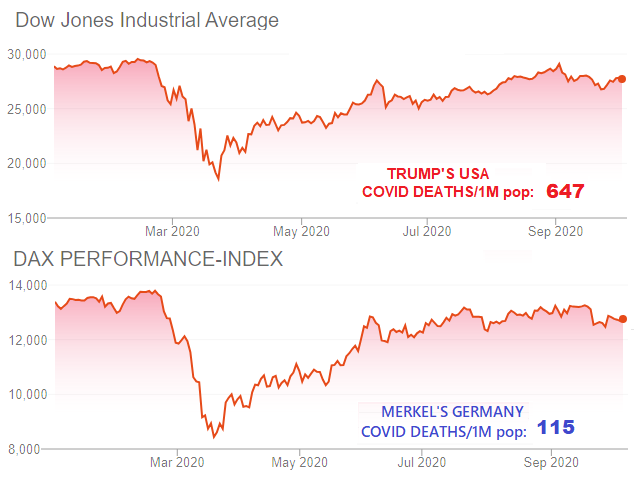 This chart proves what I have been saying since April, that the economic loss of these Covid deaths are inconsequential in spite of all the media coverage. Rather than damaging the US economy, Covid caused some temporary inconvenience and pain, but like a controlled burn, eliminated some of the deadwood from the economy (such as redundant, barely-profitable businesses and high-risk-factor people whose deaths were hastened). It is mostly low-IQ, low-income people who have been affected and who have died, who produce little economic value. Had only 50,000 people died, the S&P would probably still be above 3300, but not much higher than it is now. Out of a labor force size of 130 million people, the loss 10 million jobs due to Covid–jobs that are redundant and or economically unproductive (so-called zero marginal product workers)–is a drop in the bucket and inconsequential to the US economy and consumer spending. 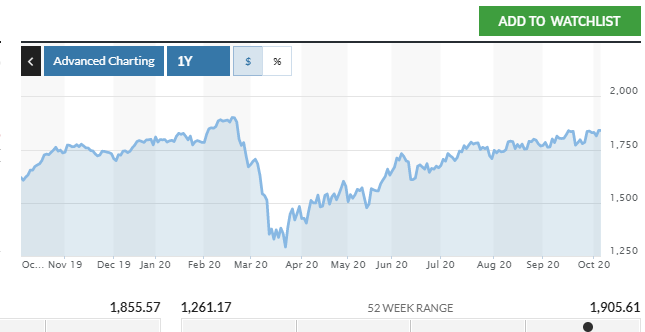 Same for Sweden’s stock market, the OMX Stockholm 30 Index, which recovered almost all its Covid losses in spite of Sweden famously rebuking social distancing measures. Sweden’s performance is about the same as the German Dax, in spite of the two countries totally opposite approaches to the virus. Like the US, Sweden had a 6x had a higher per-capita death rate than Germany (600 deaths per millions vs. 100), but there was no difference in market performance.

And now that the President, First Lady, Hope Hicks and God knows who else in the White House have the disease, the public’s perception that this thing is nowhere close to over (and, in fact, totally out of control) will only heighten the anxiety. Hope Hicks could turn out to have been a super spreader at the highest office in the land. The President’s people and supporters don’t wear masks in his presence as a show of loyalty to his rhetoric, which is obviously insane, but here we are.

Trump is close to being fully recovered, defying expectation last week in spite of his risk factors. Everyone else who was infected has recovered or is only mildly sick. Data from the CDC a month ago showed that 96% of Covid deaths in the US were attributable to a secondary factor such as obesity or heart disease. Given that Trump has none of those factors except mild obesity, his odds were very good of surviving.

I talked about being prepared for this “air pocket” in the economy based on the failure to get a new stimulus bill passed over the summer. It appears that the air pocket is now here.

You didn’t predict anything, and assuming you did, you were wrong again. All you did was entertain a possibility. I correctly predicted that the $600 unemployment checks ending would not hurt the US economy. With the S&P 500 close to new highs, looks like I was right again. There was no air pocket. Nike, for example, reported another huge quarter of earnings.

A report on Thursday from the Commerce Department showed consumer spending rose 1.0% in August after increasing 1.5% in July.

Economists had forecast consumer spending, which accounts for more than two-thirds of U.S. economic activity, advancing 0.8% in August.

The economy is on track for record growth in the third quarter after a historic slump in the April-June period. Third-quarter GDP growth estimates are topping a 32% annualized rate. The economy contracted at a 31.4% pace in the second quarter, the deepest decline since the government started keeping records in 1947. Growth estimates for the fourth quarter have been cut to around a 2.5% rate from above a 10% pace.

Because it’s mostly low-income people who have gotten sick and died, we would expect consumer spending to not fall much.