Trump is looking really weak as the chaos continues https://t.co/guBzcZOw5c

Let us know when you finally agree, or not. I know why Tim Pool is so successful, as I predicted in 2016-2018 in regard to the rise of centrism and the IDW and alt-center mirroring the decline of the alt-right, but the guy is the perennial weather vane of online political commentary. Tim’s strategy is to gauge the general sentiment or direction among the handful of people he follows, and then direct his huge following in that direction to ride the momentum as if it was his own idea all along. So here is Tim retweeting Mike in tentative agreement.

Mike and Tim over overreacting, trying to stir up discord to get more tweet impressions and retweets.

Mike says Trump is “polling like shit, well beyond the margin of error from the ‘unreliable’ polls (polls were reliable but misreported).” Except that according to 538 Trump is polling in the same 4-point range since early 2018, at around 39-43% approval: 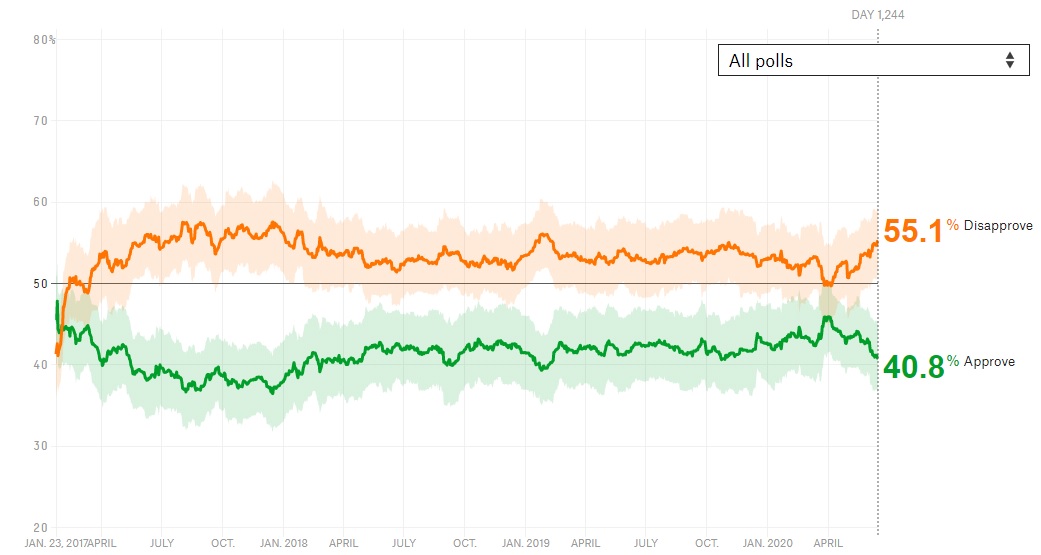 Right now it’s at the lower-end of that range, at 40.8%. The only reason why his approval has fallen is because it was inflated due to Covid, having surged to as high as 45%, which gives an idea of the remarkable stability of stable Trump’s approval rating when apop from 43% to 45% is a multi-standard deviation move.

In spite of the pandemic and rioting, Trump’s approval rating has remained remarkably but predictably constant, suggesting that few minds have been changed over the past 3 months: those who support Trump, by and large, still do; those who opposed him in 2016, still do, and nothing short of nuclear war, I suppose, will change that in either direction. Hardly anyone is like “I was going to vote for Trump but given his handling of the protests, I will vote for Biden.” Trump still retains 95% support among conservatives, with the exception of the very vocal but very tiny never-Trump minority. As for assertion that “no one influential not on payroll defending him…early supporters laughing at him, think he’s a joke,” Mike provides no evidence of this. From what I have gleaned following Trump’s twitter, there are plenty of influential people who still support Trump, but given that Twitter has a left-wing bias, their views are drowned out by the left.

Tim writes “Trump needs to get the fuck off his ass and do something about all this fucking chaos around the country” but not surprisingly offers no suggestions as to what this would entail. To say nothing has been done is false. Nonlethal force has already been used. The use of deadly force is no guarantee that it will stop the protests, but rather may make things worse. Trump is smart enough to know that actions have consequences, which are magnified in our era of social media, in which millions of people from all over the world are watching this unfold in real time, so Trump knows that any escalation of force must be deliberated. If this were 50 years ago, before social media, smart phones, ‘woke culture’ existed, then lethal force would probably work, but social media makes it harder for everyone to do their jobs, including law enforcement.

Tim wants the ad revenue that comes from being outraged but offers no solutions, and Mike, who is better in this regard, is spreading FUD and defeatism.