Interesting finding Cognitive Capitalism: The Effect of Cognitive Ability on Wealth, as Mediated Through Scientific Achievement and Economic Freedom, by Heiner Rindermann and James Thompson, 2011.

Average national IQ correlates well with GDP per capita and other measures of development. But is average national IQ really the right number to look at? “Smart fraction theory” suggests we should instead look at the range of top IQs, since the smartest people are most likely to drive national growth by inventing things or starting businesses or governing well. Now Heiner Rindermann and James Thompson (names you may recognize!) have given the hypothesis its most complete test so far, and found that yes, IQ at the 95th percentile correlates better with national development than at the 50th percentile. But I am a little skeptical of their results, because 95th-%-IQ correlates at about 0.97 with 50th-%-IQ, so any signal from the difference would be very tiny and probably swamped by other features. Also, usually when 50th and 95th are really different, it’s because the country is multiracial (eg South Africa had the highest 50th-to-95th-percentile IQ difference in the whole sample) and those countries’ policies and economies depend a lot on unique features of exactly what’s going on racially. Some more commentary here.

This paper was published in 2011, so it is fairly old, but I was only made aware of it last week after Scott shared a link to it.

This is pretty much what I have been saying for the past 5 or so years in regard to HBD and investing. Much of economic growth and innovation in the US is driven by a cognitive elite, the so-called ‘smart fraction/faction.’ I referred to such regions as ‘enclaves of intellectualism and wealth creation,’ that are mostly dotted in coastal (blue) areas. That is not to say that liberals are smarter than conservatives or that liberals produce more economic value, but these regions are predominately located in areas that heavily lean democratic, and such tech companies and institutions are generally left-wing.

The smart faction theory explains why the US is so successful despite having a mean IQ of only 100 and large and fecund populations of sub-100 groups. It is these enclaves of intellect such as in the Bay Area, Seattle, Massachusetts, New York, etc. that drive productivity (specifically, total factor productivity), economic growth, and is why the the US is so much more successful than other countries economically in terms of generating per-capita, inflation-adjusted wealth, and also why treasury yields are so low and the US dollar is so strong.

The paper was published almost a decade ago, so how has it held up? Since publication, the trend of countries with free markets and large smart factions outperforming the rest of the world economically–the US especially–has only accelerated. This is evident when one notes the huge divergence of inflation-adjusted wealth, dollar-adjusted wealth, real GDP, and stock market gains of the US, especially the tech sector and real estate, compared to the economies of Germany, the UK, Brazil, Italy Turkey, Spain, Russia, etc. since 2011.

The performance disparity between US equities and the rest of the world is huge, and goes back decades: 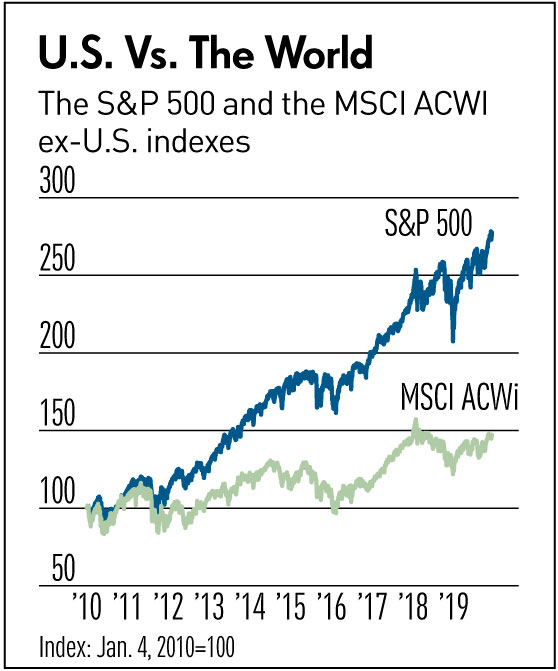 Same for the strength of the US dollar and GDP growth compared to foreign economies. Even if foreign economies may post more nominal growth, when adjusted for inflation and currency decline, such growth is flat or negative. Zimbabwe has the greatest nominal GDP growth of any country, so this is an important caveat.

The Nasdaq has more than doubled since 2011, but the indexes of Brazil, Turkey, Russia, and Italy have posted negative returns. By investing in America, especially its tech companies, you are investing in this faction. The US-global economic and stock market performance gap has only accelerated since the pandemic. The Brazil stock ETF, EWZ (which acts a proxy for the Brazilian stock market), fell 50% since April and barely recovered (as Brazil’s Covid situation has spiraled out of control and is major a heath and economic crisis, as I correctly predicted). Meanwhile, the S&P 500 is just 17% off its highs having recovered most of its losses. The Nasdaq has recovered almost all its losses.

But if other countries have smart factions, why is the US so much more successful? Two reasons: in absolute numbers, the smart faction of the US is by far the biggest compared to the rest of the world, due to a large native population and an abundance of high-IQ immigration. The US is a magnet for the ‘best and the brightest’ from all over the world, and these smart immigrants coalesce in these regions, and then though assortative mating grow their ranks, boosting US per-capita economic growth (this is what really matters because you are accounting for productivity) and engendering economic stability, and also helping to pay for the social programs too. An estimated 40-50% of U.S. STEM PHD holders are foreign born. “Roughly a third of the United States’ college and universities graduate students in STEM fields are foreign nationals—in some states it is well over half of their graduate students.” 40% of Fortune 500 companies were founded by immigrants. 18% of immigrants to the US have post-graduate degrees, which is a lot of people given how much immigration there is. Second, America’s capitalistic/free-market framework/culture and protection of property rights, combined with geopolitical stability, also helps greatly.

But then what about the dysgenics hypothesis, that the high fertility rate of sub-100 groups threatens these factions. But if this were true, why do such factions exist in the first place? Surely, they should not exist, but should have long since been bred out of existence. This will be discussed in part two.